However, The Scottish Salmon Company (SSC) has clearly not realised the gravity of the issue.

On Tuesday SalmonBusiness reported on the comprehensive and grotesque lice problems that have hit SSC’s Vacasay fish farm site at Loch Roag, on the Isle of Lewis, Scotland.

With the aid of a video filmed underwater, one could see a large number of bloodied farmed salmon where lice had eaten into the fishes’ skulls. The pictures speak for themselves. This is a prime example of an appalling farming operation and a horrific lack of respect for elementary animal welfare.

Public opinion
The graphic images bring forth recollections of the terrible problems Måsøval Fiskeoppdrett and Lerøy Midt’s had with lice west of Frøya (Mid-Norway) in the autumn of 2016. At that time the photos were pounced on by national media, and inflicted on the involved companies – and the marine farming industry in general – a highly negative public opinion case.

The problems at Frøya led to hefty fines as well as a judgement ordering the halving of the biomass of the production licenses concerned. Lost earnings ran into sums of millions of euros for both companies.

Måsøval and Lerøy took full responsibility and regretted the inconvenience that largely occurred due to lack of preparedness for dealing with such a huge and sudden influx of lice. Since then both have invested heavily in infrastructure to ensure that similar animal tragedies never happen again.

Resolute action
Nothing less than admitting complete responsibility and taking resolute action is what is necessary to assure employees, the UK food safety authority, Directorate of Fisheries, neighbouring companies and the general public that this is something that should never have happened and will definitely not reoccur. That is the only course to take.

Communication here must be crystal-clear: In no way, shape or form is this acceptable for us!

With that backdrop, SSC’s PR section’s response to the media’s enquiries is a strange one, but also absolutely an “own goal”. It doesn’t just affect SSC, but the entire Scottish marine farming industry.

“Fish health and welfare is fundamental to responsible salmon farming and we take this very seriously. However, as with any farmed stock, health challenges can occur and this can be exacerbated by higher temperatures.Sea lice are endemic in the wild and the warmer water temperatures has impacted incidences this summer. We are committed to responsible farming practices and stringent health management of our stock. Through ongoing investment and innovation, we are committed to working with academic and industry partners to finding long term sustainable solutions to tackle these industry-wide challenges.”

The – so far – only statement from SSC is generic, tones down the degree of the situation’s gravity and presents the situation such as if fish that are half devoured by lice, they are part and parcel of the daily operation – for both SSC and the industry in general.

Grotesque
SSC, which has hired in PR consultants, has obviously not fathomed the gravity of the issue, which has prompted massive reader traffic. The grotesque and, to the highest degree, visual news has spread like wildfire, providing heaven-sent ammunition for the industry’s opponents, thus causing the Scots’ reputation to be decisively stomped in the mud – and mud sticks.

It also addresses another problem. If the Scots’ own organisation, Scottish Salmon Producers Organisation, does not take a stand publicly and makes a clear statement about what they think of this way of practising fish farming, then others will beat them to it. There can be no doubt that this is proof of such appalling practice, supplemented with weak judgment at several levels, which should necessitate appropriate consequences for the perpetrators.

There are 7 billion people on this planet. We owe it to our oceans to ensure we are providing a sustainable alternative alongside catch fishing #scotfood pic.twitter.com/xzfdY2Vftd

Trust and confidence
But now is not the time to pump “good-news” items about sustainability, new export records and sponsoring of age-specific soccer teams in sparsely populated rural districts. Now’s the time to clean up the mess. To stand upright, and through action take responsibility, and provide credible assurances that this will not recur.

One million euro fines, corresponding reactions in Norway, should serve as a realistic indicator of what they can expect to be faced with. At the same time, the situation is such that SSC, and other producers, are dependent on national authorities’ support and approval for production growth and access to new farm sites.

In this instance trust is a keyword. Trust equals hard currency.

The fact that the PR consultants and SSC’s management don’t see the connection here between reputation and trust from the authorities, is astonishing. Regardless, this animal tragedy should be seen as a golden opportunity to bring clarity to all this, thus learning a valuable lesson for the future. 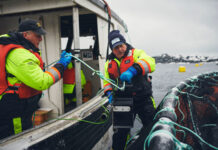