Odontella, a start-up in Bordeaux, France, is the latest seafood-industry “disruptor” to launch a lookalike product to compete directly with once-living salmon, France Info has reported.

The group proffers a salmon-coloured, salmon-scented and wood-smoked dough that’s made from micro-algae.

The product — zero percent fish, 100-percent algae meal — is their trademarked, vegan Solmon, the newest known offering for those averse to the butcher’s block and, perhaps, the nature of things. The start-up looks to be a business of the Odontella Society (named after the algae and its growers).

“We find it in different forms in the food chain in the oceans and it arrives on our plates in the form of fish,” biologist Pierre Calleja, told France Info, adding, “It has all the molecules that are beneficial to humans and we can use it like salmon, shellfish and St. Jacques scallops,” Calleja was quoted by Euronews as saying. 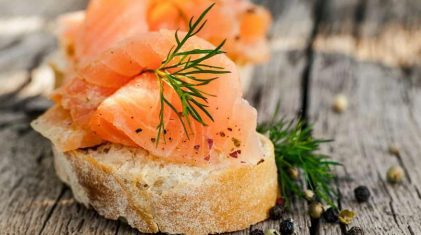 Odontella appears to get is supplies from the microalgae they farm in large basins near the island of Oléron of Rochefort in Western France. It takes 15 days to produce a kilo and three hours to turn it into the raw material of a doughy salmon replacement.

“A salmon is typically bred for five years before it ends up on our plates,” Euronews reported.

Japanese interest
After 220 prototypes and two years of refinement, Odontella has started “industrial production”, and Japanese firms are already said to be interested in the “vegetable smoked salmon”

Meanwhile, in a country of chefs, the start-up has found one who’s created a range of appetizers as marketing.

“The stakes are high: at 40,000 tonnes a year, France is the largest consumer country of smoked salmon in the world,” Euronews reported, adding that the dough will sell “priced between EUR 60 and 65 per kilo”.

“What is happening now is not comparable to anything I have been to before”: Møgster no longer with a board position in DOF

“What is happening now is not comparable to anything I have been to before”: Møgster no longer with a board position in DOF