Their workable plan for ocean salmon-farming in hand, a team of Chile’s most experienced industry thinkers begin talking to investors about what might be the future look of salmon-farming

Noah of the Bible had an ark and animals two-by-two.

Chilean start-up Ocean Arks Tech, or OATECH, plans two arks that’ll carry 3,900 tonnes of fish in four to eight pens aboard a semi-autonomous vessel that’ll move to where ocean water is best-suited to grow fish — or just away from marine heatwaves, algae blooms and storms.

Playing the role of Noah is Rodrigo Sánchez Raccaro, director and founder of OATECH. From 2003, as CEO of EcoSea Farming, he developed the low-maintenance copper alloy mesh intended for the Ark’s net pens. Raccaro has been marketing and development manager for salmon-farmer AquaChile: “I got the mission of opening AquaChile Inc. in the US,” he tells SalmonBusiness.

In 2016, he started OATECH with a veteran team that includes pioneering salmon-farmer, Cristino Stange, who once produced “70-percent of Chile’s smolt production”. The leadership includes a maritime-operations expert and Rodrigo Fernandez, a naval architect and engineer with 15 years of experience building vessels for aquaculture and fish transport.

The right investors
As for the Ark … they’ve done the drawings. They aim to build a 170-meter-long “ship” that’s 60 m wide and handles waves 7 m high. The trimaran is envisioned having three, 4,000 kW diesel-electric motors but being towable by tug if needed. It’s envisioned going crew-less for three weeks at a time, with staff returning by vessel or helicopter when needed.

OATECH’s founders have the expertise in salmon-farming, marketing and naval architecture. What they don’t have is capital. The company’s salmon-industry and ship-building veterans need investors in 2018 to start building in 2019. Investment secured, they would then call on the right shipyard and order the high-tech that would have to come from a range of suppliers. Then again, they know the industry and its supply chain.

Raccaro and Stange are notable aquaculture thinkers. Raccaro’s business accolades include a Chilean National Innovation Award for developing the copper, anti-predator netting of Oceanic Food Solutions and Coppernet. Like many visionaries, there ideas draw attention, and OATECH drew a lot of that at Aquaculture America 2017 in San Antonio, Texas.

Modelling done
“We have applied all our knowledge and experience in the design, engineering and development of this farming Ark,” Raccaro says. “We finished the basic engineering, the dynamic and static modelling to see the results and resistance to the waves. We finished the costing of the ship. We have the preliminary Gantt chart of the times required to build the first Ark and we finished the business plan for the fish production of fish in two ships.”

Raccaro uses the word ship when describing the trimaran ark. It makes sense. Although the Ark is reminiscent of the NSK Design Havfarm being built in China for Norway-based salmon farmer, Nordlaks, it’s aimed partly at international waters and looks decidedly more ship-like. To some, the Arks looks more … superyacht.

“This Ark was designed for countries that do not have ready the regulations to operate near to their coast, while the ship can operate in international waters allowing the offshore and sustainable aquaculture to move towards its natural development,” Raccaro says. 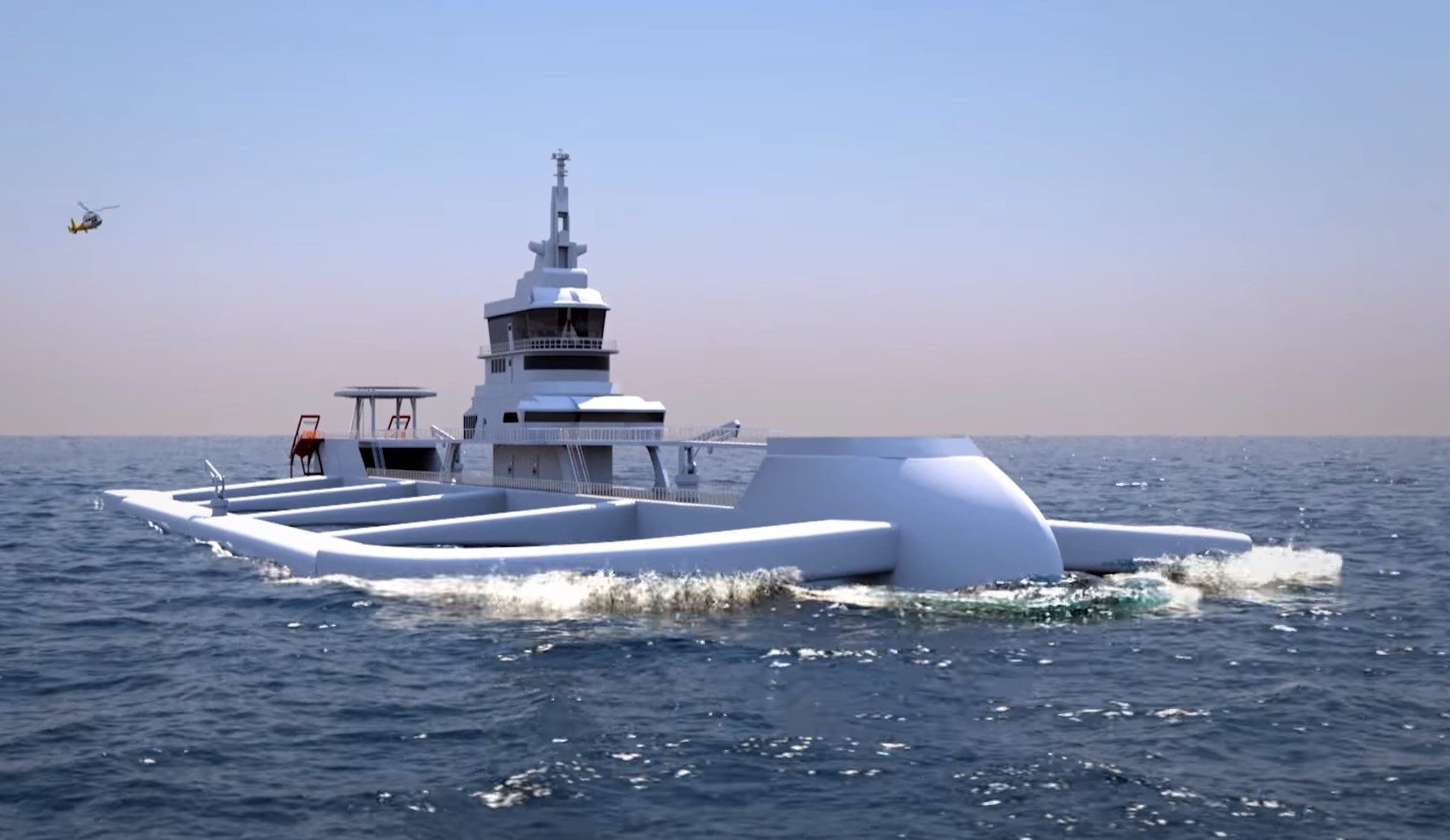 Species non-specific
Space for 450 tonnes of feed means it can stay at sea without being supplied for three weeks at a time. So detailed is the operational side of the planning, that fish mortality aboard the ark is already expected to be “five percent”. Rodrigo says the ship-shape vessel will also be able to farm the high-seas, high-returns species tuna, cobia and amberjack.

Already, there are patents for three ark types in 154 countries: “It was the first thing we did years ago,” Rodrigo says.

Like many great and some not-so-great ideas throughout history, the Ark idea was born innocently and somewhat appropriately for a business based on ocean harvests: “It was conceived under a palm tree with a glass of margarita on holidays in the Caribbean in 2016. We were watching as the excess of seaweed was taken out on trucks from the beach and thinking that there is a giant ocean where all these problems can be avoided, for the people and for the fish,” Raccaro recalls.

“Our restaurant business has of course, been drastically decreased”

Havfarm 1 sets out on maiden voyage

Havfarm 1 sets out on maiden voyage