In slight departures from their core restaurant offerings, Orlando-, Florida based restaurant chain, Red Lobster, and famed TV chef and restauranteur, Gordon Ramsey, plan major new campaigns that’ll put Atlantic salmon in the spotlight for up to a year.

Red Lobster — the world’s largest seafood restaurant company — launched a range of menus for the coming year that feature lobster and other shellfish. One menu, the Wood Grilled Lobster, Shrimp and Salmon features lobster tails, a jumbo shrimp skewer “and fresh Atlantic salmon”, all “finished with brown butter”.

“We’ve also added truffle … to this year’s line-up, which pairs perfectly with lobster to create a rich, indulgent flavor combination for our Lobster Truffle Mac & Cheese,” a statement said. Red Lobster, with 55,000 employees, will serve farmed salmon at over 700 restaurants. It said it gets all of its Best Aquaculture Practices salmon nearby, a nod to Miami’s salmon processors.

Hell’s salmon
Partial to chicken, Ramsay, for his part, will put Crispy Skin Salmon on the menu at his bright, 300-seat Hell’s Kitchen Restaurant on the Las Vegas Strip. With wild salmon only available for shorter periods during the summer, the restaurant’s grand opening as part of the Caesars Palace casino and resort appears to be featuring Atlantics.

“Since its soft opening in early January, the highly-anticipated restaurant has already received reservations for nearly 25,000 guests,” a statement said.

Ramsay has become The Gordon Ramsay Group, and “the multi-Michelin star chef” produces TV shows from the restaurant on both sides of the Atlantic, and they’re seen worldwide. 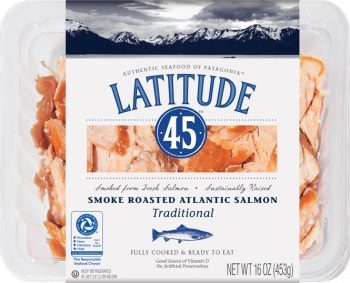 Midwestern salmon
Not to be outdone, Grand Rapids Michigan’s Meijer supercenter grocery stores — all 235 of them spread across the U.S. Midwest — said this week that its chefs would be sourcing smoked Chilean salmon sold in the U.S. under the brand, Latitude 45. Meijer, in a press release, said that, “Thanks to better sustainability methods used in aquaculture, smoked Atlantic salmon is now more affordable and accessible.”

Meijer is expanding its selection of Smoked Fresh Salmon by introducing new varieties available through Latitude 45. One new variety is smoked-roasted salmon.

Citing the U.S Department of Agriculture and USA Today, the Meijer said just 10 percent of adults in the U.S. eat enough fish, most saying “they don’t like it”, according to the company.

Apart from including salmon, SalmonBusiness could find no sign that the Red Lobster, Ramsay or Meijer campaigns are related. All campaigns, however, launched this week.

EU’s largest RAS salmon farm to be built in France