Danish land-based plant may not be making the grade

Danish Salmon and another Danish player, Langsand Laks, lead in the development of farmed salmon for the table-top market. The newbie outfit from Hirtshals, Denmark, reported Monday that it’s on track for a positive 2017 result.

It’ll be the first time in the modern era that a land-based farmer of Atlantic salmon achieves a positive balance sheet.

Still, it’s not yet a surplus.

On the EBITDA side (operating result including depreciation and amortization) it looks like a marginal result, but there’s still a pre-tax and EBIT (shows debt) loss — just as there’s been every year since start-up in 2012.

The difference between EBITDA and EBIT is central here, as factory-produced salmon normally costs considerably more to make that what’s produced in pens offshore.

15 million bucks
Depreciation for a salmon plant on fixed real estate will reflect a multiplicity of investments not found on a traditional site with its knots and nets. To illustrate this, Danish Salmon has in its accounting allowed the foundation, property and the facility’s assets to appreciate to 125 million Danish kroner (USD15.3 million). That’s a hefty sum for a plant that’s budgeted to produce between 900 tonnes and 1,000 t the following year.

To compare, a seaborne facility would be able to produce between 10,000 t and 15,000 t of salmon a year for the same facility investment.

Up to 1,000 t in annual produced volumes are too small-scale to count, and the Hirtshals facility cannot, as it stands today, make use of economies of scale. The costs dilemma relative to marine sites reinforces the idea that land-based fish production is better suited to far-away markets — where there’s no grow-out net in sight. With today’s knowledge and technology, it’s plainly just not competitive.

Acid test
The real test won’t actually come this year — or, right in the middle of the best salmon market since Viking times. Gold medals aren’t given for almost making money with salmon prices above USD7/kg, with traditional farmers clearing USD2/kg.

No, the acid test will come when we, after a while, again see noteworthy global growth on the supply side — along with lower, normalized prices. A land-based fish farmer should be prepared to produce salmon at prices when prices are as low as USD5/kg, a level we’ve already seen in this year’s pre-Christmas trade.

If a land-based farmer manages to produce salmon that cheaply, then, well, yes — we’d really be talking about a game-changer. 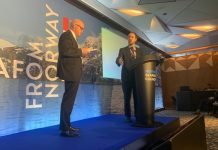 Brexit: “Let’s not mess around, this is political, fish is fish”

EU’s largest RAS salmon farm to be built in France