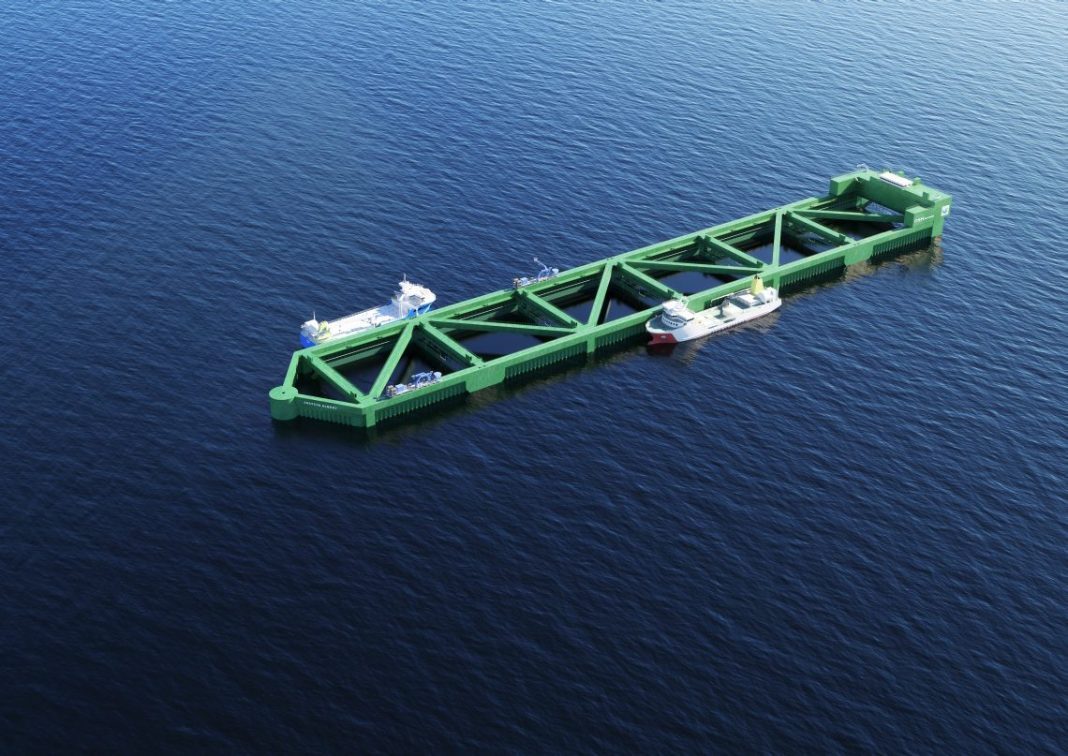 Techano will build parts for Havfarmen, the giant offshore grow-out.

The Norwegian engineering company Techano AS, part of the Dutch Van Aalst Group of Companies, has secured a substantial contract to design and produce highly specialized offshore and marine equipment for the world’s largest floating aquaculture construction “Havfarmen”.

The 385 metres long and 59,5 metres wide Havfarmen, which is owned and operated by the Norwegian aquaculture company Nordlaks, will hold up to 10.000 tonnes of fish. The radical aquaculture construction was designed by NSK Ship Design.

“I am very pleased to announce that Techano was able to secure the order for two advanced Rail Mounted Service Units (RMSU) and an offshore crane,” confirms Øystein Bondevik, Commercial Director at Techano in a press release.

SalmonBusiness asked Mr Bondevik what the new contract meant to the company:

“For us, it means that we’ve got a foothold. We’re now not only in gas and oil but in aquaculture, both “green” and “blue” industries. And we have achieved all of this in less than a year,” he said.

“It’s a cross-over technology. Which means we can use the same high end technology for new emerging markets,” he added.

China
The contract was entered with CIMC Raffles in Yantai, China. The yard has one of the world’s largest drydocks, with a length of 400 meters and a width of 120 metres. The agreement is for the first of two planned “Havfarm” units.

The offshore grow-outs will anchor at sea off northern Norway in an area previously impossible to grow salmon in. Up to two million salmon could start doing their rounds in the 385-meter-long grow-out by 2020.

Cross-over technology
The RMSU enables farm operators to take care of aquaculture equipment and fish in a safe and efficient manner. One RMSU will be mounted on rail on each side of the construction. Due to the outreach of 25 meters of the cranes on the RMSU, the full width of the six fish pens can be reached. A man basket will also allow operators to reach all parts of the pens, measuring 50 by 50 meters on the surface. Furthermore, the RMSU allows for ROV support and control.

Wijnand van Aalst, CEO of the Van Aalst Group, said “Techano’s knowledge of the fish farm industry and offshore cranes in combination with Van Aalst’s knowledge of gantry mounted crane units have proved to be a winning combination in this case. Moreover, the Van Aalst Group is a regular supplier to CIMC Raffles. Entering the rapid developing offshore fish farm market, establishing strong foothold in Norway and a jumpstart in the specialized 3D offshore cranes were our main drivers to invest in Techano. With this ‘milestone’ contract, the mutual vision of Techano and Van Aalst receives a flying start.