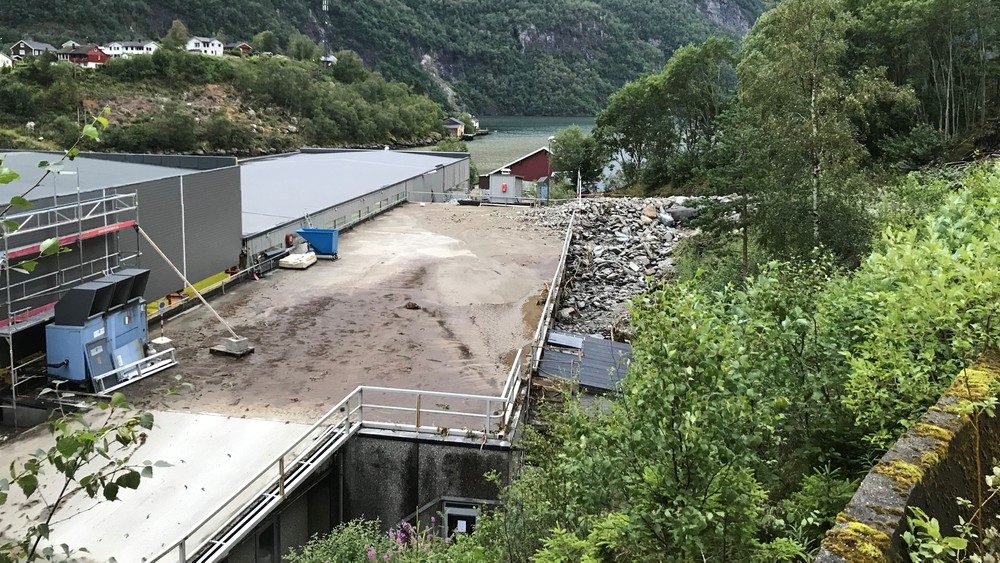 On Tuesday evening, Hyen Fisk was hit by water, mud, and masses of rock and gravel when the river Årneselva burst its banks and went through its two plants.

This accident was first reported by NRK.

Witnesses said that the Årneselva came quite suddenly and unexpectedly, with very large water masses. The fjord is now completely brown, and there is a lot of driftwood there.

Neighbouring company, boatbuilders Brødrene Aa, said they took the brunt of it.

“Gradually the roof collapsed in parts of the plant. The masses of water continued to penetrate, and there are hundreds of cubic stones and gravel inside the plant. This has resulted in great values being lost,” Brødrene Aa CEO Tor Øyvind told NRK.

“We still do not have a complete overview but estimate mortality to about 150,000,” wrote Hyen Fisk CEO Åsmund Ommedal in a text message to SalmonBusiness.”There is a full focus going forward in securing the fish in the plant. The fish seems to be doing well under conditions. It will be exciting to see how things develop over the next few days. There will be a lot of cleanup work ahead,” he added.

Ommedal said that there are approximately 1,500,000 fish on the site. Juveniles in the hatchery weigh around 2.5 grams, while in the grow-out, the average weight is about 50 grams.

Both Chairman of the Board of Hyen Fisk, Kurt Djupvik and Leiv Slagstad, CEO of Hyen Fisk’s main shareholder, Nordfjord Laks, said that things were not as bad as initially feared.