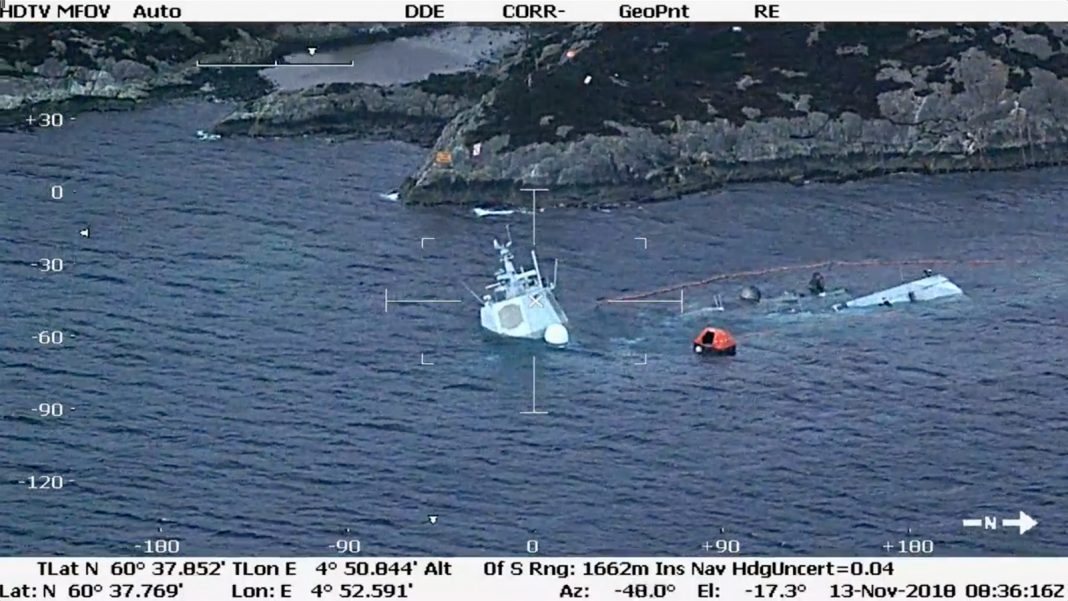 During the weekend, Norwegian Armed Forces emptied three fuel tanks from the sunken frigate KNM “Helge Ingstad”. They are currently halfway through the drainage process.

On Monday morning, the Coast Administration announced that diving contractor, Subseapartner, had emptied approximately 150 cubic metres (150,000 litres) of marine diesel. This weekend, the defense calculated that there were still 385 cubic metres of diesel left to clear.

The sunked frigate is in the centre of the busiest salmon farming region in Europe. Farmers were worried about how the spill would affect their sites.

At the same time, the Coastal Administration’s oil spill pollution control vessel, “Utvær”, cleared around 13 cubic metres of diesel oil from the area during the weekend.

“A dive operation was introduced at 17 o’clock on Sunday because of the change in the crank angle of the vessel. During the last 12 hours, the vessel’s movements have been minimal and one aims to resume diving operations in the morning hours,” the Armed Forces wrote.

The frigate was secured earlier today in anticipation of storms and the emptying of fuel tanks has been put on hold. There is currently an orange (moderate) alert for severe weather over the area.

“There are several uncertainties that may affect the schedule, including weather conditions, vessel stability and the risk of pollution. The expected weather forecast can cause delays in the schedule of elevation, and it can make movements in the vessel. There is still a significant risk that the vessel may slide into deeper water. There are major forces in turn, and several factors affect the situation. The vessel is continuously monitored,” the Armed Forces said as reported in abcnyheter earlier today.