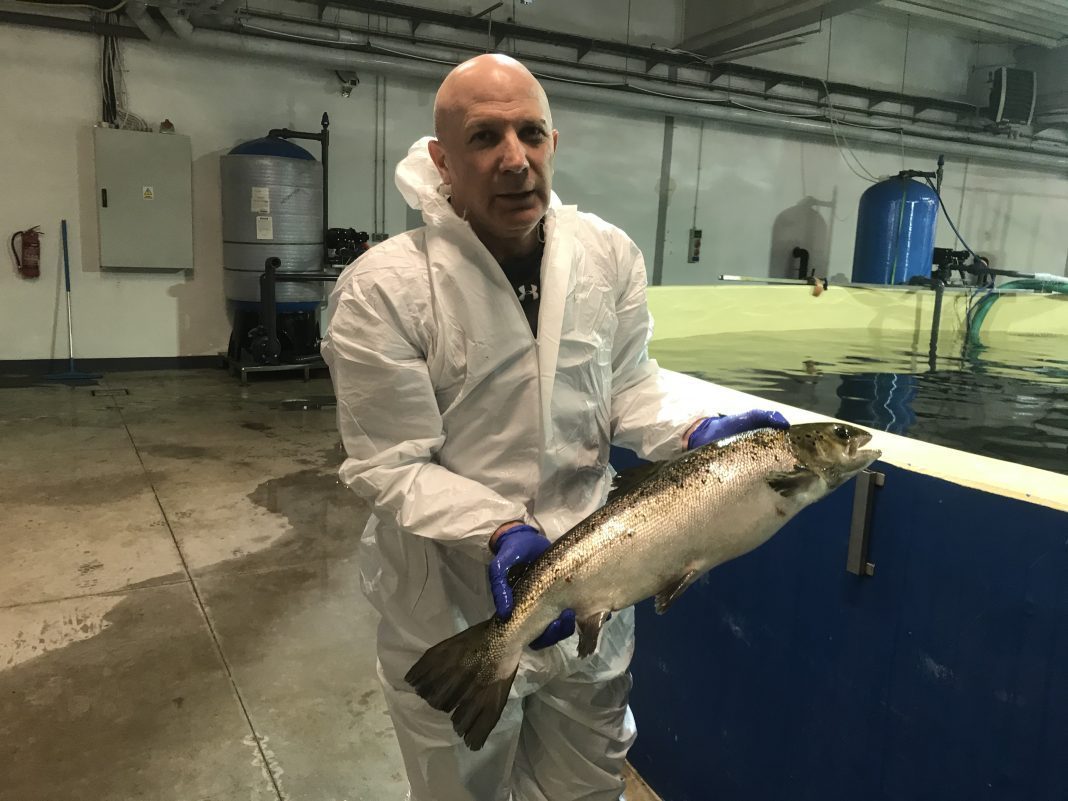 The water spray hits us. Large and ready-to-eat salmon splashes in the water. The tanks inside the production hall are close to 200 miles from the Baltic Sea.

“Look, some of them are 5.5 and 6 kilos. We’re going to start harvesting now. We start when the fish reaches an average weight of 4.5 kilos,” said Yoav Dagan, founder and marketing director of Aqua Maof, to SalmonBusiness.

The Israeli company operates an indoor aquaculture facility just off Plonsk, a one-hour drive north-west of Warsaw. The fish swim countercurrent in the tanks.

“We have less current when we starve them before harvest. We don’t want it to lose weight,” he explained.

Read also: This sushi is served with salmon which is farmed and harvested in Poland

Dagan fishes up a bouncy salmon with a net in from the tub, it’s a tough fight to hold the fish and show it off to the photographer.

Economies of scale
Dagan estimates a production cost of USD 3.4 per kilo of live fish.

“But remember that there are scale advantages,” he said.

From hatching eggs to slaughter at 4.7 kilos it takes 23 months. Aqua Maof tests different density and survival rates in the plant owned 50/50 with partner Pure Salmon.

Inside the production hall there are eight small and ten large tanks, six and 12 meters in diameter respectively. They are three metres deep. There is no condensation in the hall. Also no odour.

Measured and evaluated
“We measure humidity and temperature in the air. We only have top lights, because we don’t want to create shade,” he explained.

PH values ​​and salinity are other things that are continuously measured and evaluated. The temperature in the water is 13.8 degrees celcius – probably ideal for salmon.

“We run different temperatures. We do tests to see what is optimal,” said Dagan.

The tanks in the seven-year-old building are made for 1,000 tonnes, but produce 480 tonnes of salmon annually now.

“We want to reduce this to test more. This is primarily R&D. Here we focus on training and learning more about RAS (recirculation aquaculture system). Because there is not much information available about full scale RAS. We must learn a lot on our own,” Dagan elaborated.

In these tests, density is driven up to 175 kg per cubic meter of water.

The water spins in strong currents in the tanks – to ensure proper swimming resistance and thus condition and texture for the salmon. The speed of the water is related to the size of the fish.

The fish is fed with Skretting’s tailor-made RAS feed. Roe is from Iceland.

“We use Stofnfiskur roe now. Hopefully, we will start a breeding program with them,” Dagan continued.

Smoltification
There are pallets stacked with bags of salt by the tanks.

“We take the smolt up to 150 grams and do smoltification by adding salt under 24 hours of illumination. But we will smoltify the former, between 40 and 60 grams, because it grows faster in salt water,” he added.

A diploma hangs on the wall outside the lobby. The plant is ASC certified. Sustainability, but also biosecurity and risk management are crucial for Aqua Maof.

The building is built on a foundation raised above the ground. This is done in order to utilize the gravitational force. The water comes in by gravity to the drum filter. The UV filter ensures that the water is free of pathogens. Added ozone cleans the water completely.

“We push the fish, we don’t pump. We don’t stress it,” Dagan explained.

Besides the salmon plant in Poland, Aqua Maof has set up a rainbow trout plant in Russia together with a partner.

It is designed for 500 tonnes, but they produce a little more. We are now building a new plant, at 5,000 tonnes, at Kaluga near Moscow.