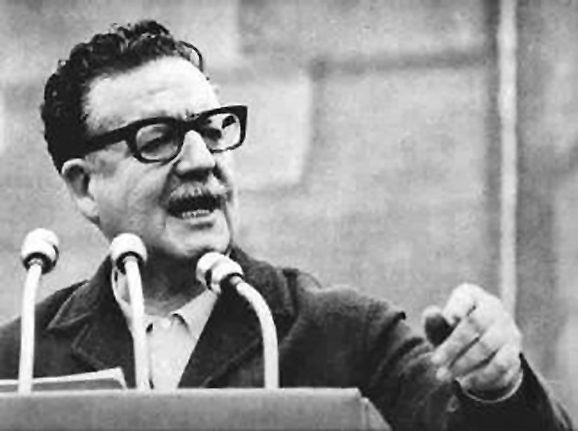 Chile’s 911: 11 September 1973, the day that President Salvador Allende and democracy in Chile died.

Salmon farming started during a dark period in Chile’s history.

It was in 1979 that the Japanese fishery conglomerate Nichiro first invested directly in Chilean fish farms. What prompted this move was the nosedive in catches of wild salmon following the implementation of 200-mile fishing zones in the Pacific Ocean. Nichiro’s goal was in the long run to be able to source fish from one’s own production sites.

Nichiro’s efforts took place in close dialog with Fundación Chile (FC), a private non-profit organisation, which the following year established its own marine farm. FC was engaged in research on artificial reproduction and breeding, and development of fresh water and marine facilities. Nicohiro introduced fish farming in tanks, and FC followed suit. FC then trialled a number of fish species, including salmonid species such as pink, chinook, coho and trout.

Nazi ties
Investments made by Nichiro and FC prompted new privately-owned enterprises to venture into fish farming; by 1985 there were 36 firms engaged in fish farming in the country. Two years later, 117 fish farm enterprises had been established in Chile, according to SalmonChile.

Fundación Chile is a joint venture established by the Chilean government and ITT in 1976, according to Wikipedia.

But who was behind ITT?

New York-based International Telephone & Telegraph was founded in 1920. With its basis in the U.S. national market, ITT owned, among others, telephone companies in Puerto Rica and Cuba, and participated in the establishment of Spanish Telefónica. Throughout the 1920s ITT continued to gain a stronger footing in the European telecoms market. In August 1933, ITT founder Sosthenes Behn had his first meeting with the newly elected German Chancellor, Adolf Hitler, and it is understood ITT also made cash payments to SS chief Heinrich Himmler. ITT owned, via the subsidiary The Lorenz Company, 25 percent of the German aircraft manufacturer Focke-Wulf. In 1943 it upped its holding to 29 percent in the company that, among others, was responsible for the creation of the feared Focke-Wulf 190 fighter plane. ITT retained its holding for the duration of the war, according to Wikipedia.

Coup
During the 50s and 60s the company made hundreds of acquisitions and ventured into numerous industries. As a manufacturer of radar technology and defense electronics, ITT became one of the ten biggest suppliers to the U.S. Armed Forces. Through acquisitions that included the rental car firm Avis and the Sheraton hotel chain, ITT evolved into a classic industry conglomerate.

ITT also owned the telephone company in Brazil. The election of the left wing President João Goulart in 1961 caused U.S. President Lyndon B. Johnson and Minister of Defence Robert McNamara to express their concerns that Brazil might become a Communist regime. ITT’s CEO Harold Geneen was a close friend of CIA Director John McCone. The CIA launched an extensive campaign to undermine Goulart, while at the same time financing the opposition.

The CIA was behind the military coup that took place in Brazil in 1964. McCone began working for ITT a few years later. Goulart was deposed and chose self-imposed exile in Argentina, while the junta remained in power until 1985.

Copper
ITT’s presence in Chile was also significant. The company owned 70 percent of the national telephone company Chitelco and also founded the influential right wing newspaper, El Mercurio. Together with two other U.S. firms, Anaconda Company and Kennecot Copper, ITT controlled the country’s copper mines. One-third of the world’s copper is produced in Chile, and the metal was of strategic interest for ITT’s telecom and electronics activities.

In November 1970 the socialistic Salvador Allende was elected President of Chile. In the following years, Allende nationalized the copper industry, in addition to a number of other reforms.

American financial and security-political interests were thus under threat.

On 11 September 1973 the CIA executed a military coup in Chile. Allende was discovered inside the presidential palace, La Moneda, and shot in the head with a Kalashnikov rifle. The new Head of State, General Augusto Pinochet, proceeded to rule with an iron fist. Tens of thousands, including women and children, were tortured, imprisoned and killed by a blood-soaked regime.

Miracle
Influenced by Nobel Prize winner Milton Friedman and the so-called Chicago Boys, Pinochet was an enthusiastic supporter of free markets and liberalism. The regime implemented economic reforms, including stabilization of exchange rates, and customs/duties reductions. The way was opened for global trade, trade unions were prohibited, and a privatized social security system was established along with hundreds of State enterprises. The policy was popularly known as “Chile’s miracle”, and provided the impetus for exceptional economic growth – surpassing anything any other country in Latin America would experience in ensuing decades.

Among the new export industries that emerged and developed in Chile during the 80s was marine farming of salmonids. When 75-year-old Pinochet stepped down in 1990, Chile had produced (that year) 9,600 tonnes of Atlantic salmon on marine farms off Puerto Montt in southern Chile.

In 2017 Chile, now the world’s second largest salmon farmer, is expected to harvest 524,000 tonnes of Atlantic salmon, according to Kontali Analyse.

And what of ITT?

The company is still listed on the New York Stock Exchange, has activities in 135 countries, and in 2012 had a turnover of USD 2.2 billion.