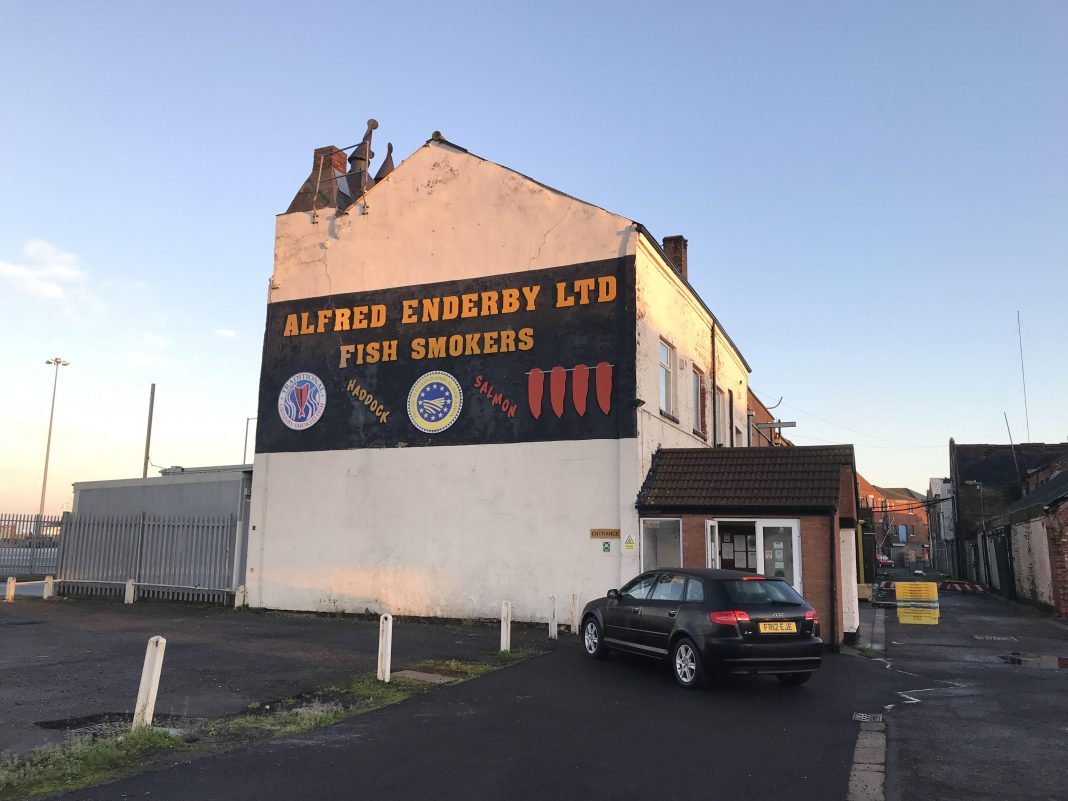 The entrepreneur, who only took on the famed smokehouse in 2016, has gained a legion of fans thanks to his PGI protected fish. He also believes that politicians missed a trick by not making Brexit a positive affair.

While his salmon is supplied to luxury hotels and to celebrity chef Marco Pierre White’s restaurants, Patrick Salmon, owner of Alfred Enderby, one of the earliest independent fish smokers in Grimsby, is also interested in getting out his smoked fish out to the public more.

Alfred Enderby method
“Mail order is our target audience, really,” he said. “We’d like the Joe public to buy it directly. Those who investigate the provenance and look out for the uniqueness of food and buy into that. It’s a bit special really.”

The Alfred Enderby method hasn’t changed in 100 years. The salmon is dry-cured in salt and hangs in the house for a period, smoked with a secret type of smouldering wood shavings. The building is naturally ventilated from the Humber’s cool night air.

“That’s where we would like it to be driven,” he added. “It’s far more fulfilling for many reasons like margin, payment but also satisfaction.”

As the UK parliament rejects deal after deal (even rejecting a deal to a no deal), it’s understandable that businesses keep an eye on the future relationship with the EU.

Brexit
“We don’t really send to Europe, we probably could a lot more (and probably should). Day to day, there’s no point in getting wound up about it, because we don’t know how it’s going to affect us – though it certainly stops us from exploring that avenue. The other thing is the feeling of uncertainty in the country,” he mulled. “People are both worried and are tired of it – it does have an effect.”

Salmon explained that just two months after he bought the business from Richard Enderby in 2016, Brexit happened and devalued the pound and making everything more expensive.

Salmon was involved in food production before embarking on salmon smoking – at one point he even produced pork from his own reared pigs – demonstrating a passion to understand the complexities of creating quality food.

“The insatiable appetite – the race to the bottom – the race to produce ever bigger quantities of poorer quality is bonkers, in all sorts of industries but certainly in food. But I can’t do it, we only have one quality, and it’s the only one,” he said.

“My passion is to produce the very best – with no compromise,” he added.

Grimbsy
Salmon, who is local born and bred, has a real connection to the Grimsby – the heart of the UK’s fish-processing industry.

“I’m keen to see Grimbsy thrive. But bizarrely it has a poor reputation, more so within Grimsby. People see it as the home of fish and that’s true, but it’s also the home of fish processing, which is desperately important. It’s the most important fish processing town in Europe and terribly valuable, and people should realise it more and get behind brand UK.”

Looking ahead
In conclusion, with a fresher perspective on Brexit, Salmon said that Brexit could have given the country an opportunity to refocus our minds.

“Had they been done it properly from day one, we could have thrown our weight behind brand UK and focused on positiveness, instead of the negative apathy and lack of confidence. If they were running a company, I would have sacked the lot of them,” he laughed.