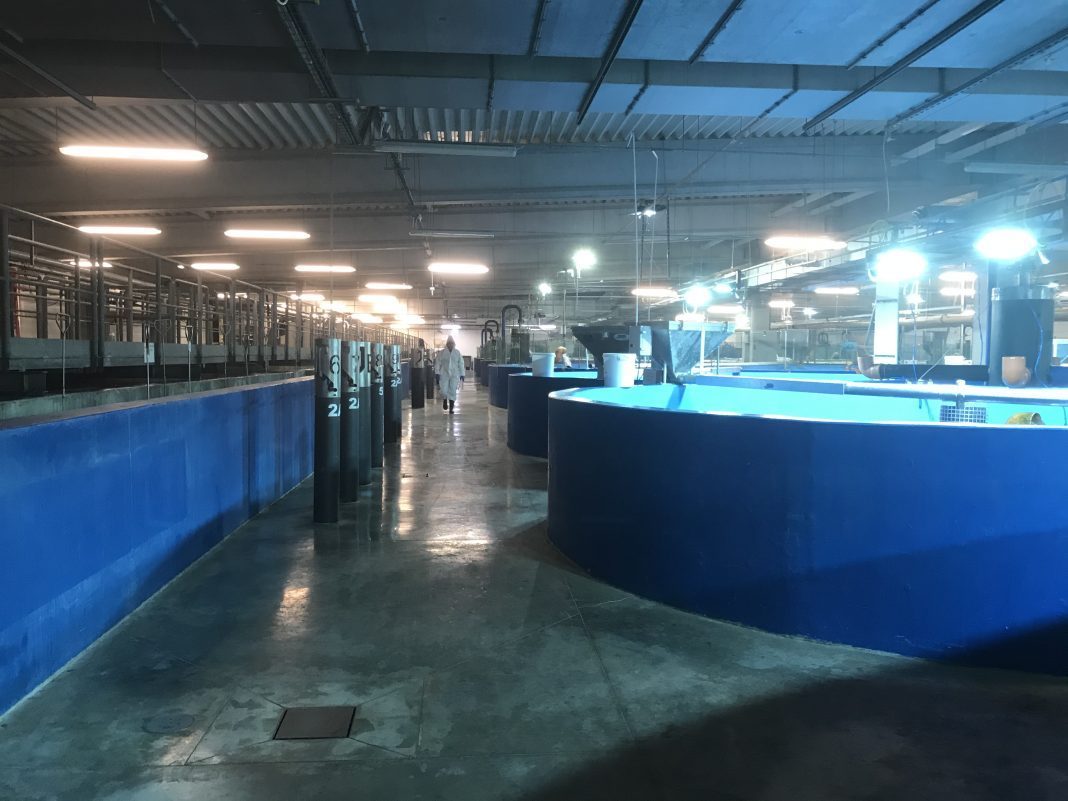 Aqua Maof has good reasons for doing so.

The land-based farm at Plonsk, northwest of Warsaw, was originally designed for an annual production of 1,000 tonnes of tilapia. The company did not manage to sell the tropical fish in the high-price segment, and, in consultation with partner Aqua Maof, chose to switch to salmon.

“We bought them out,” says Yoav Dagan, founder of Aqua Maof, to SalmonBusiness. “That’s the beauty with our system – you can switch to other species.”

Grand plans
A few months ago, Pure Salmon bought 50 percent of the facility, which is now a research laboratory and training center. Pure Salmon has grand plans to produce up to 260,000 tonnes of salmon in a series of onshore plants in three continents. Then they have to have the farming skills in place first.

Israeli Aqua Maof claims they have “the world’s most advanced RAS solution” and have more than 30 years of experience in land-based fish farming. The art of utilizing lean water resources, through recycling, has evolved over many years in fish farming – including in the Negev desert of Israel.

Founder Yoav Dagan had backgrounds from US investment banks Goldman Sachs and Lehman Brothers, when he and his brother David chose to start fish farming on a commercial scale. Aquariums, in different sizes, they were well acquainted with growing up on a kibbutz.

Many species
Aqua Maof has now built facilities and owns farms in Costa Rica, Belize, Indonesia, USA, Poland, Russia, Malaysia and Brunei. The combined technology and aquaculture company Aqua Maof is still controlled by 60 per cent of the shares owned with the founders.

“All are species that we have burned our feet on,” admits Dagan.

You farm a lot of species. Why not bet on one that is particularly commercially interesting?

“It is an interesting question,” he says, and gives himself a brief thought before continuing: “It has its background in Israel being a Mediterranean country where people eat many species of fish. Israel is also a multi-ethnic community. After World War II, the country was largely colonized by Europeans. Later, Jews from several nations followed: Turkey, Tunisia, Morocco, Argentina, Yemen. While Greeks and Turks eat sea bass and sea bream, other, poorer people from the old Soviet states will eat carp. Sturgeon is also popular there. That was the beginning for us,” says Dagan, who is of German-Russian descent himself.

He adds that Israel consumes 30,000 tonnes of salmon annually – in a country without traditions for catching this species. Fish is popular, not least in the form of kosher (food that is allowed for believing Jews to eat, in keeping with the eating rules of kashrut, which originate from the books of Moses – ed. Note).

Recycling
“It started with ponds. Now almost everything goes with RAS (recirculation aquaculture system – ed. note). We reinvest everything we earn in RAS positions with partners. We want to prosper with them,” says Dagan.

He talks eagerly and enthusiastically.

Technology
Fish production takes place in both freshwater and saltwater. Here they have hatchery, ongrowing and processing plant.

“We do not get rich in construction. Our advantage is technology and training. Execution is crucial,” says Dagan. “We want to minimize energy consumption and waste. We will split each tank individually from the system. The modules can be built with from six to eight tanks.”

Land-based aquaculture plants have long struggled with high mortality. This is a challenging form of production, with several risks.

“H2S, toxic hydrogen sulfide, can also occur in fresh water. We have never had H2S in our system. Never,” he says.

“There are several reasons for that; we use laminal flow, we do not use mechanical filtration and sedimentation. We have an open system with low use of energy and pumping, and we use gravitational force,” Dagan says.