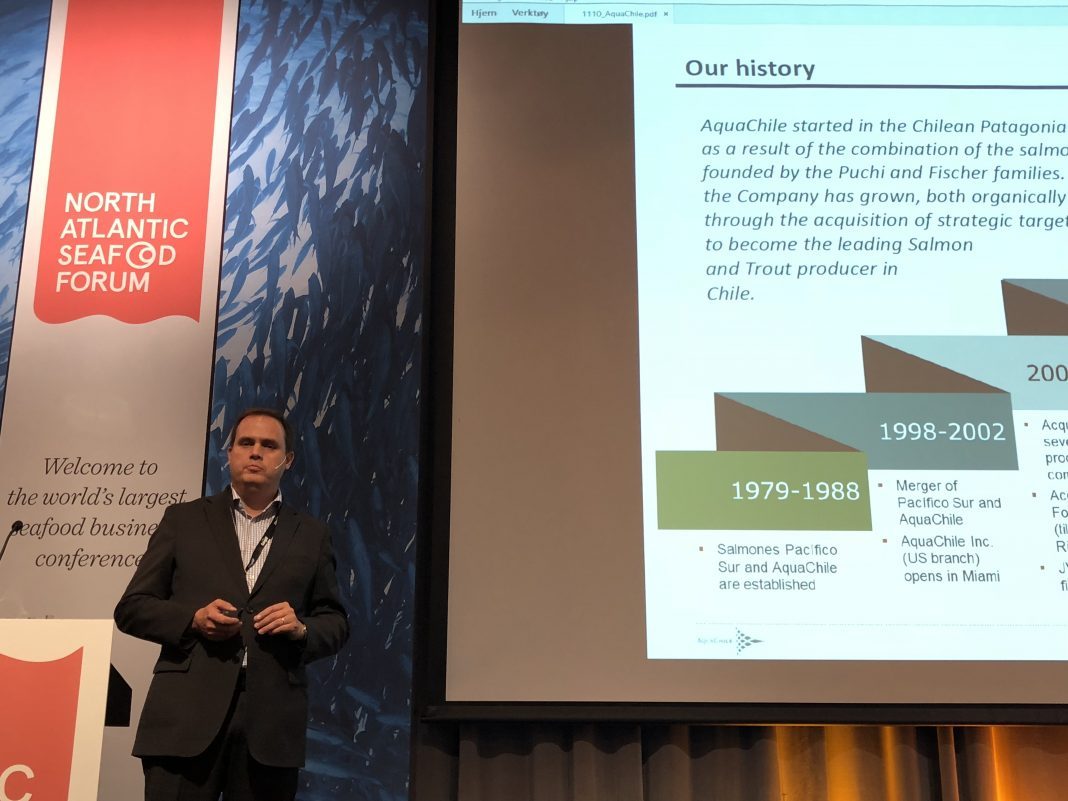 This isn’t little league. The company has issued guidance for a salmon, rainbow trout and Coho harvest of between 91,000 and 94,000 tonnes.

Wholly integrated
AquaChile is a wholly integrated company, from genetics to the consumer. Its roe production is at 60 million eggs and it raises 3.5 million smolt yearly.

When it comes to salmon in the Latin American market, no one’s bigger.

“We produce our own smolt in over 20 hatcheries — in lakes. In farmed fish, we have 151 concessions or licenses in regions X and XI. We recently received permits for three concessions in Regions XII and we’re in the application process for a fourth.

“We have four processing centres and processing plant for tilapia with capacity for 160,000 t,” Lepeley said.

Roadshow
With over 11 investors packed into a room at the Radisson Bryggen Hotel in Bergen, this is an important part of the European roadshow started this week by Pareto Securities. In investor eyes, AquaChile separates itself from competitors by having its own sales organisation to reach out to consumers.

“We have opened five supermarkets in Chile. This has been a success, as we meet the end customer.”

Brands
U.S. sales are fronted by the brand, Verlasso, which is approved by the Monterey Bay Aquarium. “This salmon goes through another diet based on algae. There’s lower (fish) density in its pens, a fish-in, fish-out ratio of under 1:1, and we have limited use of medicines.”

AquaChile’s EBITDA increased by 152 percent in 2017 to reach 141.9 million kroner on 637 million kroner in turnover. The company achieved EBIT per kilogram of USD 1.36, and its net debt stands at USD 178 million.