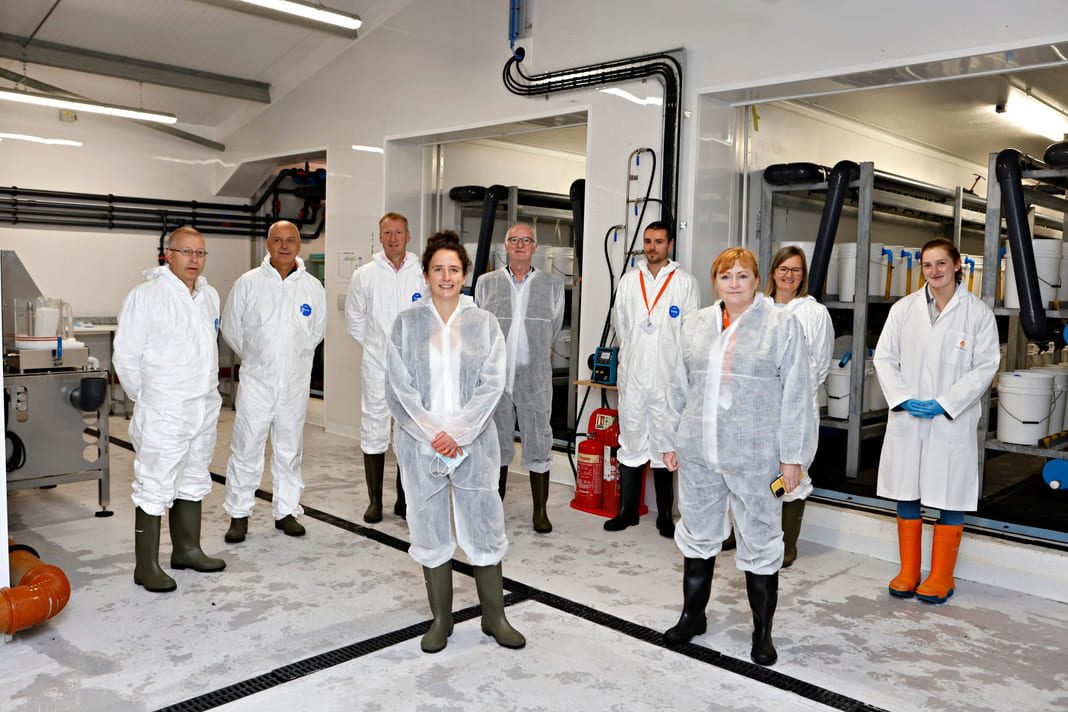 AquaGen acquired the hatchery in March 2019 and has subsequently invested more than £5 million, rebuilding and repurposing the facility for salmon egg production.

In a press release accompanying the announcement, Rural Affairs Secretary Mairi Gougeon said, “Aquaculture and its wider supply chain is an essential component of Scotland’s economy, adding valuable jobs and contributing to the local economies in some of our most fragile and rural communities.

“We are working to continually improve the policy and regulatory framework to mitigate environmental impact and at the same time support sustainable growth, and I welcome plans by AquaGen to increase egg production for domestic and export markets.

“I am delighted to see this important part of the breeding sector develop in Scotland, which will support better biosecurity by providing a robust ova supply in Scotland, selected for their performance in the Scottish marine environment.”

State of the art
The AquaGen strain has been developed since 1971 through scientific selection and breeding for the best performance in commercial fish farming.  Acquisition of the Holywood Breeding Centre enables the company to provide a reliable supply of eggs from AquaGen broodstock, which are reared in, and selected for best performance in the Scottish farmed environment. Key investments include full environmental control of the broodfish rearing environment and state of the art egg incubation systems.

Over the next three years, the company aims to increase production to 50 million eggs, which will be available for delivery all year round to domestic and export markets.

AquaGen works closely with two of Scotland’s largest salmon farming companies, Cooke Aquaculture Scotland and Scottish Sea Farms. Elite breeding populations are reared in their commercial locations on the west coast and in the Northern Isles.  The best performing stock are selected at sea and returned to Holywood for egg production.

Targeted breeding
Keeping elite populations in Scotland facilitates targeted breeding to improve biological traits specific to stock health and welfare in Scottish farming conditions. In turn, this increases relative robustness and most importantly, welfare in stocks destined to supply a high-quality Scottish product to the market.

Cooke Aquaculture Scotland Freshwater Director Paul Irving said:“The new facility will do even more to improve control, traceability and performance to enable our pre-smolts to thrive in our hatcheries and freshwater facilities throughout Scotland and the north of England, and progress to the cold, fast-moving waters of Orkney and Shetland.”

AquaGen is the world’s largest supplier of salmon eggs to the global farming industry, with production facilities in Norway, Chile and Scotland. AquaGen Scotland is part of the AquaGen Group, which is headquartered in Trondheim, Norway.