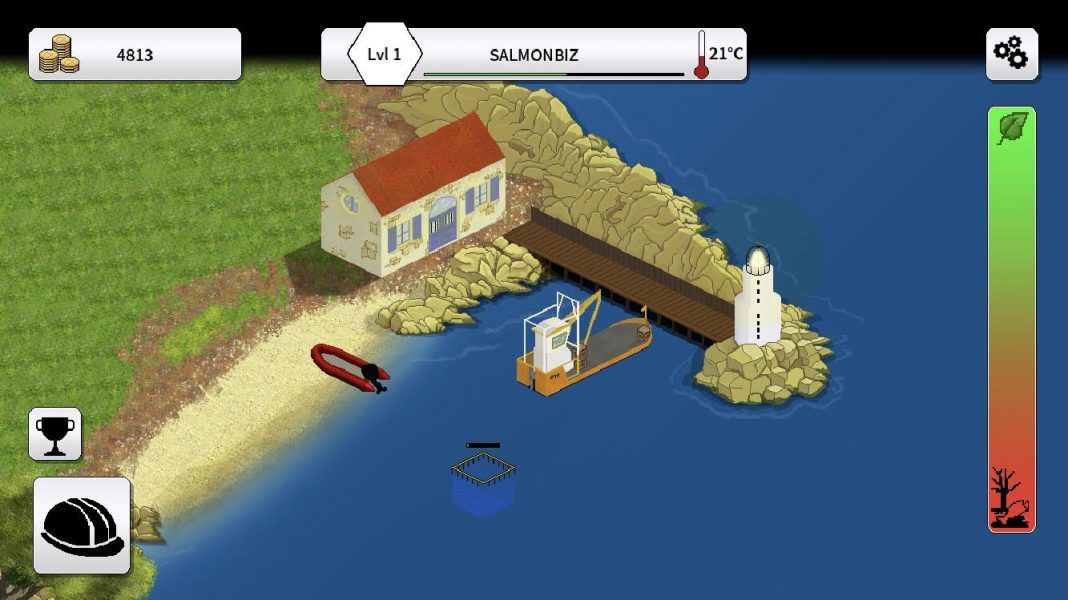 SalmonBusiness tried out the game that should be on on every fish farmer’s mobile device.

It’s a simple premise – grow some sea bass and watch your fish grow. But of course, its not as easy as it sounds.

Solid replica
AquaKultor is a throw back to games of old like Theme Park, Theme Hospital and there are even hints of Sid Meier’s Civilization. What they’ve done is a pretty solid replica of the trials and tribulations of your average fish farm. There’s a business element to it, but the real heart of the game lies with optimising your production while reducing its environmental impact. No mean feat as we find out.

The brainchild of Dr. François Allal, IFREMER (French Research Institute for Exploitation of the Sea) and Dr. Mathieu Besson, INRA (National Research Institute of Agronomy), the two academics worked with independent games studio, TOMAGameStudio to create the mobile game. AquaKultor was unveiled at this year’s We R Aquaculture Conference in Montpellier, France and has over a 1000 players around the world, including those from Marine Harvest and the European Commission.

Gameplay
First, you are tasked with setting up cage, in a simple drag and drop action – then you have to add your first fish. You can buy cages, expanding your farm as you go along.

When the eggs are put in, the fish grow to full size in under two minutes, a rate some fish farmers can only dream of.

Build your farm
You can then sell your fish to buy more cages, equipment and even staff. The game starts off by giving you your own junior geneticist (Francky) and diver (Matt) who bear a striking ressemblance to the games creators. I’m currently working towards hiring my own senior geneticist for 10,000 gold coins. The dream is to get my own Head of Hatchery, Bernadette on board for 200,000 gold coins (I heard she did a stint at Marine Harvest, or was it Leroy?).

But its not all about making money. Everytime you grow and sell more fish, the more the environmental impact and loss and pathology are measured. Looking after your surrrounding is key and this gets your further into the game, driving your success as a fish farmer.

Maintenance
Budget in tow, as your fish are grow, it’s time for a bit of maintenance. One mini game pits you against the clock to scrub your nets clean in under 30 secs. You’ve got to keep an eye on the over state of your farm and cages, which can fall foul of the elements or/and disease at any time.

If there’s one minor gripe, it’s that I took quite a while to earn some coins catching fish after a sea monster wiped out all my sea cages. But perhaps the creators of the game have done this to show how frustrating mass mortalities can be? Though not sure how many Krakens have broken in any salmon pens recently.

Surprises
There are a few unexpected suprises which we wont spoil, but its a great little game, and well worth a look. The game’s founders said that are working on other species so we are all waiting for the salmon version.