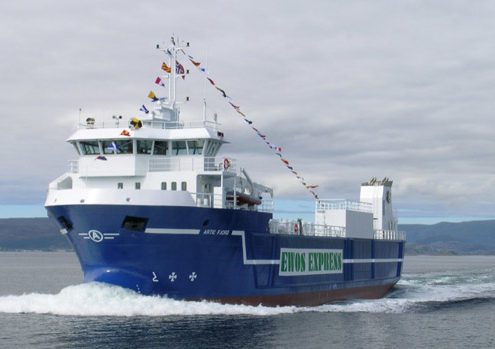 AquaShip has purchased 100% of the shares in Artic Shipping.

The service vessel companies GripShip and Johnson Marine who merged their wellboat businesses through a jointly held parent company, AquaShip earlier in the year, are expanding their fleet.

“Artic Shipping fits perfectly into our strategy of building a globally leading player within the broader maritime service segment of the aquaculture industry, said AquaShip CEO, Sverre Taknes. With this acquisition AquaShip is represented in the segments of service boats, shipping of fish feed, harvest vessels and live-fish-carriers, giving us a unique position as a complete supplier of maritime services in maritime aquaculture. This is a position we intend to exploit in our further growth,” added Taknes.

Acquisition
Artic Shipping was the first to market in 2002 with a silo-to-silo solution for the bulk transport of fish feeds. In recent years, the company has developed the concept further and built several unique combination-boats, which can transport both finished goods and raw materials on the same vessel. The company has 75 employees, all of which will be transferred to AquaShip in the acquisition.

Ambitions
“This is a process that has been going on for some time, and the decision to sell has not been easy to say,” said Artic Shipping’s Ove Vilnes. “As we have become more acquainted with AquaShip, we have been impressed with what we have seen. The consideration for employees and EWOS as the client has been more important than anything else in the process we’ve been through. When we now choose to sell to AquaShip, it is because we are completely confident that it will be “business as usual” and we have been assured that the buyer will stand for continuity of our core values, which is safety, quality and environment. Artic has a fantastic crew, which we have built the company together with and this is a good solution for all parties involved,” he added.

Vilnes will, through its shipbuilding company, continue its work on the development and construction of new vessel concepts in the aquaculture industry.

“Artic Shipping is a company we strongly believe in. We therefore have ambitions to build on the expertise and, not least, the technologically leading platform that Artic Shipping has today,” concluded Taknes.

AquaShip has 25 vessels in the segments of service boats, harvest vessels, service vessels, live fish carriers and feed-vessels. The company has its current operations in Norway, Iceland, Scotland, Shetland, Ireland, the Mediterranean and Chile.