Around the world, an army of automatons is at work. They are weeding fields, picking fruit, loading pallets, monitoring patients, disinfecting hospitals and making deliveries.

The move towards automation may have already been underway before Covid brought the world’s economy screeching to a halt. But having received a shot in the arm from difficulties presented by the pandemic, now the outbreak is finally under control, the difficulty in hiring workers is a whole new impetus to the technological revolution. 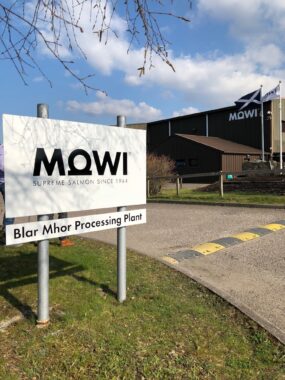 In the UK, this has been exacerbated by Brexit and the disappearance of hundreds of thousands of labourers from the country. A report from the Royal Bank of Scotland published last month shows a near-record number of job vacancies in the UK — and also the second most severe drop in the number of applicants for permanent positions since the survey was first run in 2008.

The salmon industry in Scotland has proven particularly vulnerable to this cocktail of factors.

At maximum capacity
Mowi’s Blar Mhor plant in Fort William was built in 1987 with a design capacity of just 5,000 tonnes per annum. Today, following three decades of piecemeal modification, the company has eeked out an annual yield of 66,000 tonnes from the site. But there was no room to grow capacity further within the existing building.

In 2019, prior to the pandemic, the company began considering alternatives to the site, including constructing a new build from scratch. But in the end, following a strategic review, the answer to this problem was obvious: Automation.

In October, Mowi Scotland announced that completion of the upgraded facility  is expected in the second half of 2022. According to Donald MacIsaac, manager of the site, the £15 million upgrade including the integration of state-of-the-art robotic technology will transform the factory into one of the most efficient and highest capacity fish processing facilities in the world.

“On this shift we can probably do 45,000 to 50,000 fish a day.”
As MacIsaac explains on a tour in November, work is at an advanced stage already, and the company has signed contracts for infeed to gutting lines, graders, packing lines and for robotic box stacking.

“Aye, it’s going to change the whole site completely,” nods MacIsaac when asked how big an upgrade the project represents.

“It’s mainly because of space that we don’t have robots at the moment. We know we’re going to go from 100 to 200 fish a minute over the next few years, the way we need to do that is automation.”

He points around the factory floor, “at the moment we’ve got people, you see people standing up in the high level platform, they’reup there grading fish manually.”

“We’ve got seven gutting machines at the moment and a hand gutting table.”

MacIsaac continues, “in the future when we reach 200 fish a minute, all the fish will be graded by camera.”

Factory floor
From the office window down onto the factory floor, we are able to see exactly where the changes will be made, which the factory manager rattles off with barely a move of his head, “there’ll be two of these graders, but much more modern … We’re going to have separate graders for packing the bins as well … professional gutting machines … And then obviously stacking robots. And then our box store will be modernised too, so that the boxes and their lids will automatically be fed through.”

”So there’s quite a bit of automation,” he concludes, satisfied.

“Post upgrade, our target will be as quickly as possible to get to 150 fish a minute. Also we are planning to put in a pre-rigour filleting plant, which will help gain some shelf life on the back end.”

Gesturing to the floor below, he says, “at the moment, we’re pulling these bins about with manual pallet trucks. But we’re making a lot of space next year so that we can use electric power trucks. And if possible, if you can get an operator which we think we’re going to get, it’ll be standalone electric pallet truck.”

Reassessing priorities
In the UK, at least 200,000 EU nationals, primarily from eastern Europe, who once filled roles in areas such as agriculture, transportation and logistics, have left the country and may never return.

Scotland, with its lower population density is particularly vulnerable to the problems created by these changes. And it is something Mowi is only too aware of. The move towards automation is as much about creating a more attractive workplace for employees as it is to do with efficiency, MacIsaac says. Removing the most repetitive and physically arduous tasks is the first priority.

“It’s going to get rid of a lot of manual tasks in the factory. And as we do that we will engineer out quite a lot of tasks.”

“Soon we’ll have a pallet robot which will essentially de-stack the pallets and feed the other three robots. And then these three robots have the capacity of more than 200 fish a minute or over 40 boxes a minute.”

More attractive work place
“Where we want to get to post-upgrade is get to a much more attractive shift pattern, down to five days a week. Which will also allows us more time for maintenance in the factory.”

As well as giving staff a more attractive work pattern, improving the facilities is expected to help retain the best staff too.

“We’ve got better canteen facilities coming next year as well. The staff are getting a questionnaire now, asking what they would want to see in a new canteen area. Once we get that feedback will then design the canteen.”

“We’re looking at some sort of sofas and chairs and televisions and stuff like that to make sure they get a nice comfy seat. As well as things like shower rooms, and nice changing rooms away from the factory floor so that if people are walking or cycling to work they’ve got somewhere decent to change.”

Processing Director Scott Nolan is excited to see the upgrades become a reality, noting the benefits it will bring to the region: “The upgrade of the Blar Mhor plant is a huge boost to the local economy and confirms Mowi’s long term commitment to the site and area. The investment planned opens up other employment opportunities for the site which includes more volume and further products like pre-rigor filleting.”

There can be no doubt that the pandemic and the associated worker shortage are accelerating the drive toward deploying artificial intelligence, robotics and other forms of automation. How far this process goes in the salmon industry, like the rest of society more broadly is still anyone’s guess, but for workers, the Mowi experience shows that there can be upsides too.