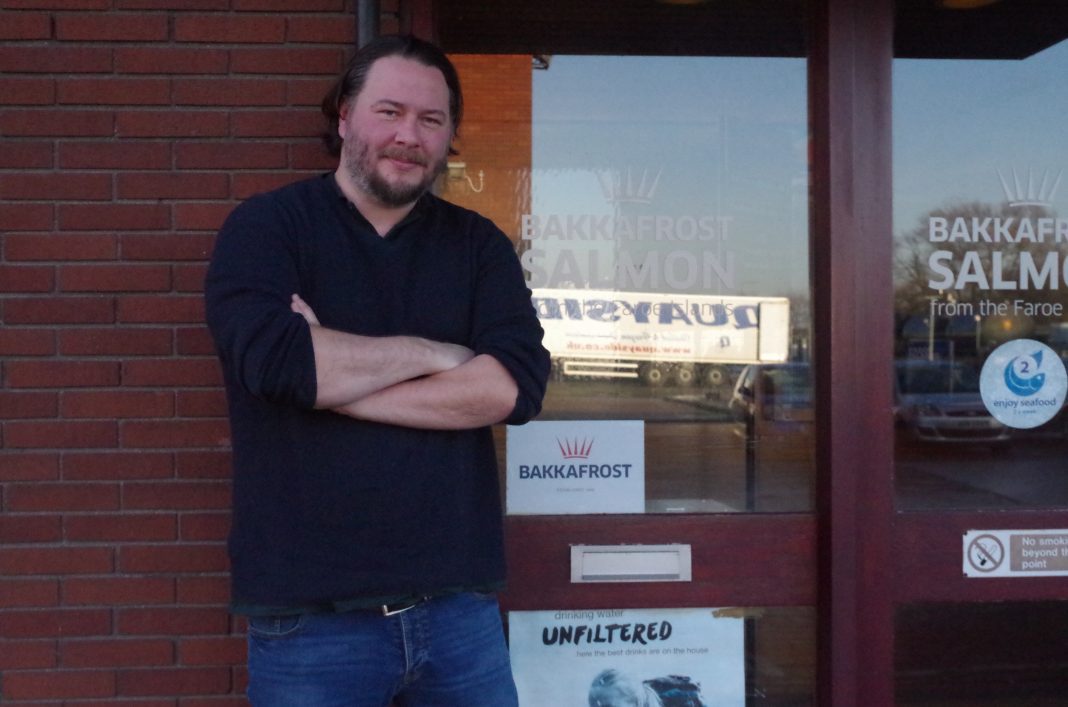 It’s the indisputable heartland of the UK’s fishing industry. And it’s also home to one of Bakkafrost’s most important outposts. SalmonBusiness spoke to Torkil Davidsen, the company’s Head of UK Operations about the strategic importance of Grimsby.

From the cobbled streets littered with cold ice, to the smell of salted cod pumping out of listed smokehouses, you get the feeling that there’s fish in Grimsby’s blood.

At Bakkafrost’s UK office, the 6ft5 Torkil Davidsen towers over me as he shakes my hand, greeting me warmly. He’s been here for 13 years overseeing and driving the company’s growth during its most productive decade ever. It’s fair to say that the company is in a safe albeit massive pair of hands.

Deep history
“There are a lot of Faroese that have stayed here over the years. An Islander guy contacted me last year saying that he was trying to find some family over here. He gave me a long list of Faroese names. A lot of them had been buried here a long time ago. So there’s a deep history here in Grimsby,” he said.

It made sense to set up shop here at the South Bank of the Humber Estuary, close to the North Sea. When the sales company Faroe Seafood become part of the Bakkafrost group in 2014, it opened an important door into the UK market. But it’s been around as a business for much longer, 50 years this year.

The town has some of biggest seafood players on its own doorstep. Seachill is just a stone’s throw away from Bakkafrost’s offices. Davidsen said that it’s not without reason why they are here.

“Grimsby is a seafood hub so whatever service we need – cold storage, transport, health checks, repacking – whatever you can imagine, it’s here. I’ve been here for 13 years so it must mean something,” he said.

I press Davidsen why exactly and he thinks carefully before answering: “The best thing about it is the connections we have built up over the years. That’s because the Faroe Seafood office had been here since the 60’s so we’ve established relationships with big companies and also new and smaller ones. We also have cold storage across the road where we can take customers to see our products. It’s easy for us to go out and see customers and for those to come here also. That’s the most important,” he added.

Quality product and a good story
“We are often in talks with supermarkets in the UK, though for supermarkets we are more established in Europe. The UK is to come but we are not there. Yet,” he said.  Davidsen explained that it wouldn’t necessarily be branded as Faroese salmon. “We do like to promote our brand but we don’t want to force it on people.” Though they are still selling over 100 tonnes of fresh whole salmon every week to the UK, Ireland and France.

Davidsen explained that Bakkafrost salmon is farmed for the fresh sushi and sashimi markets. “For that size we need to have a large salmon – the rest is for spot trading or for frozen (we produce portions). And because we go for the sushi market, it’s quite an expensive product so competing with the Norwegians, we would struggle to beat them on price in the UK market. In Europe there seems to be more interest in a quality product and a good story.”

Russia
As its stands the company’s unofficial motto seems to be simply keep doing what we are doing: that is focusing on the prized sushi and sashimi grade market. But they don’t want to put their eggs in one basket: “It’s very important for Bakkafrost to be focused on different markets at the same time. We do sashimi grade, but we also do frozen. We do America, Asia, Europe, and we also do Russia,” said Davidsen.

So it’s important to spread the risk?
“We have to. The board says you have to think about the day after tomorrow. At one point, Russia said they would buy all of our salmon and we thought, that’s not a good idea.” The company supply mainly fresh (and some limited frozen) going to top end restaurants, extremely high end. That’s one lucrative pair of golden handcuffs. “They were paying very well and it was a hard choice but it was the right one,” he said.

On an average day, Davidsen is constantly monitoring the market, working the phones and checking prices. “On top of that, we all look at SalmonBusiness over the weekend for the prices,” he added.

Prices
“Sometimes you think no that can’t be right. For example in the UK, prices are quite high at the moment because it’s based on Scottish salmon. So we, the Faroese and some Norwegians, are trying to come onto the back of it. At the same time, prices in France are coming a bit down because there’s too much Norwegian salmon. It also depends on the market you own, so you have to interpret all the information you get. On top of that you have to think how much do I have to sell this week. Is it a small week or a big week?” he mulled.

The seasoned veteran said that he every gets a gut feeling every Monday about what’ll happen. But that he’s rarely surprised. But what about when you are asked SalmonBusiness? Davidsen rubbed his chin and smiled.

“A few years ago, there was a headline that said “prisfesten er over” (the price party is over) and a week later it went higher than anyone could expect, you don’t often get that.”

But looking at the current Christmas prices, when compared with those on Fish Pool, Davidsen noticed that they are actually under, which came at a bit of a surprise.

“It makes us think that if the Norwegians are harvesting extra quantity at the moment, all the salmon will be missing when we get into February, so that’s what we’re waiting for,” he smiled.

Brexit
Something else everyone is waiting for is March 29th. The official date when the UK officially leaves the European Union ie: Brexit.

Where would that leave the office and the company’s long term plans for the UK?
“We’ve been safeguarding,” he added.“We work closely with the Danish Embassy who know what’s going on Brexit. First thing we wondered was if there was going to be any trading issues. If there was, then it wouldn’t make much sense to send it via the UK any more but I think that’s not what the British government really want either. In terms of currency, will it collapse? We don’t know. Though it wouldn’t affect us (as a company). This office does a fair bit of trade outside the UK and we are fairly big in France and Ireland. We don’t have to trade in sterling either.”

“We don’t put all our eggs in one basket,” he laughed.