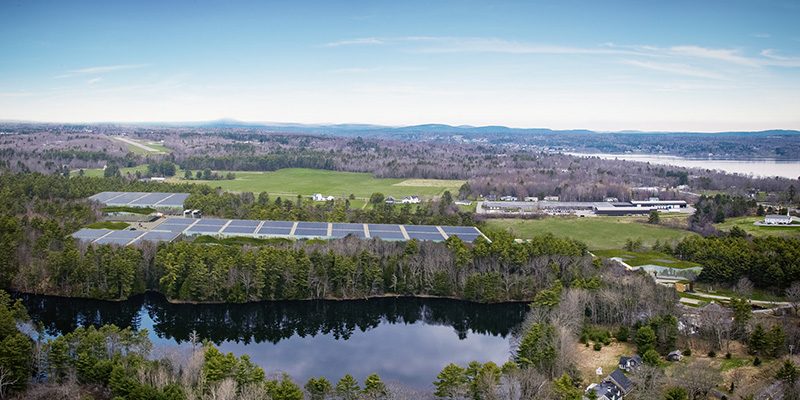 There was not a spare seat in the house as Erik Heim revealed more about Nordic Aquafarm’s branding, marketing, environmental impact and jobs at a packed talk at a local presentation for residents .

The was a full house at the Camden Yacht Club as Maine (USA) residents listened to a presentation by the CEO with big plans to open a $400 million land-based salmon farm in Belfast next year.

According to the local publication, VillageSoup Knox, Heim said that the 100,000 square-foot facility would be built alongside Belfast’s Little River. One of the reasons for choosing the site is its proximity to fresh water, which would be used in combination with saltwater to raise the fish. Sited on 45 acres, the farming facility would have the capacity to produce 30,000 metric tons of fish per year.

“This project is on a very big location, will be buffered by greenery and will produce jobs…. We want to merge the know-how and academic forces in Maine and Norway to create one of the most advanced sea farms and [to be] the biggest seafood exporter in the world,” said Heim.

“Maine has the opportunity to take the lead in the U.S., but its seafood industry is fragmented,” he added, saying that land-based fish farming in the US was the only option in order to meet consumer demand for protein – which is set to double by 2050.

Maine Salmon
The salmon will be branded as “Maine salmon”, not as Norwegian, and its cultural connection to the state will be be highlighted and marketed as thus. He stressed the importance of building the identity of Maine as an international brand of seafood in international markets, and said he was considering using the name “Little River” as part of the company’s marketing strategy. He said wanted Nordic Aquafarms to be publicly listed after an IPO in three years.

Environmental
Heim told the crowd that he had visited around 20 properties throughout the state before deciding the Belfast property one. The site will have solar paneling and other renewable energy technologies.
Furthermore he said that the facility would be discharging approximately 1 percent of nutrients, compared to sea-pen operations, and that all byproducts would be recycled for potential value in the future.

One its environmental impact, he assured residents that all production at the facility would take place indoors, so there will be no noise, and no bad smells. The salmon would be raised in an environment comprised of two-thirds seawater and one-third fresh water. The fish would be raised on a diet free of genetically modified ingredients, and the facility would discharge water from the operation into the ocean, one mile off shore.