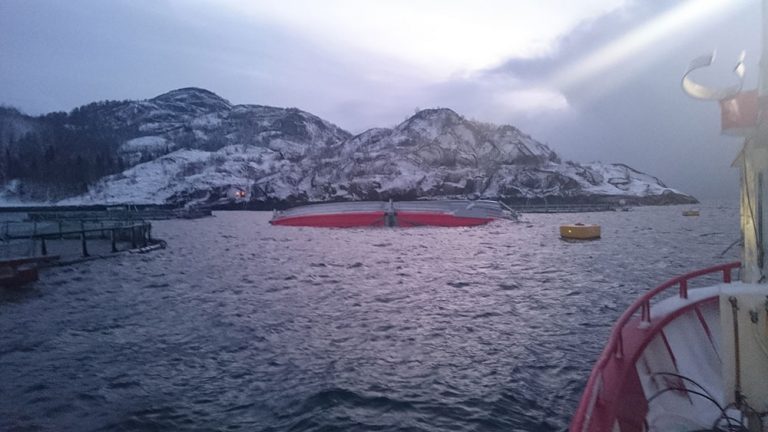 A court in Norway has concluded that no production error caused the AquaDome to fail during the storm “Ole” by 2015.

In September Cermaq had sued MSC and Norpartner in Fosnavåg for EUR 1.4 million. The parties met in the district court later that month.

Cermaq’s alleged that production failure caused the AquaDome to fail in 2015 and demanded compensation for damage to the closed cage.

In particular, there were two conditions that were observed as a cause of the accident: airpockets in the laminate and that the fibre mats were incorrectly positioned which hindered AquaDome’s ability to float, which made its resist tensile forces significantly weaker than expected.

MSC and Norpartners, on their part, believe the accident was due to extreme weather. MSC put in a lawsuit, claiming for compensation against Cermaq. The allegation was that it was MSC and not Cermaq, that was the real owner of AquaDome.

“Very disappointed”
In a recent verdict from Søre Sunnmøre District Court (central Norway) Norpartners and MSC welcomed the decision. At the same time, Cermaq is now released from the MSC’s counterclaim. The court reported that Norpartners won the main requirement, and Cermaq is therefore ordered to pay costs of around EUR 147 thousand to Norpartners.

“There is no evidence that may cause the AquaDome to be mislead in the weather if the fiber mats were laid in the opposite direction or if there was no air in the laminate.”

“In this context, the court finds that it was probable that the weather was a necessary condition for the damage caused to AquaDome and that it was a major cause of the accident”, the judgment stated.

“We believe there are clear indications that the Aquadome had production defects, and that the production errors were the main cause of the accident, but found that the court did not find a basis for concluding this. We are very disappointed with the judgment given. We will read the judgment thoroughly before concluding what we are doing further,” Astrid Aam, communications manager at Cermaq, wrote in an email to SalmonBusiness.

The head of Norpartners, Ivar Gaustad, was pleased with the verdict.

“Norpartners thinks it’s a thorough and right judgment. At the same time, it emphasises the importance of these types of projects to choose the right project management, and not least responsible customer who understands the risk of development projects,” he said.

The court ruled in favor of MSC and Norpartners. However the court stated that “neither party may be deemed to have won the case in full.” Cermaq has to pay EUR 48 thousand in costs to MSC.

SalmonBusiness contacted the general manager of MSC, Øystein Olav Grønolen, who said he was busy meeting all Thursday, and did not know that the verdict had come and didn’t want to comment at this time.

Criticised for poor project management
In the verdict, Cermaq was criticised for conducting an inspection first on February 13th, 2015 (the accident occurred February 7th) – after the AquaDome was towed to another location without being able to prove damages.

In addition, both Cermaq and MSC were criticised as “the project has suffered from poor organisation and project management.”

Regarding who owns AquaDome, the court believed that it is Cermaq who was the real owner when the accident occurred. This is explained by the fact that the company who carries all costs and risks of operation of the facility, and who also has free use of this right, also owns the property. According to the Norwegian court, MSC’s rights to AquaDome after delivery were limited to technical testing, as well as intellectual property rights.