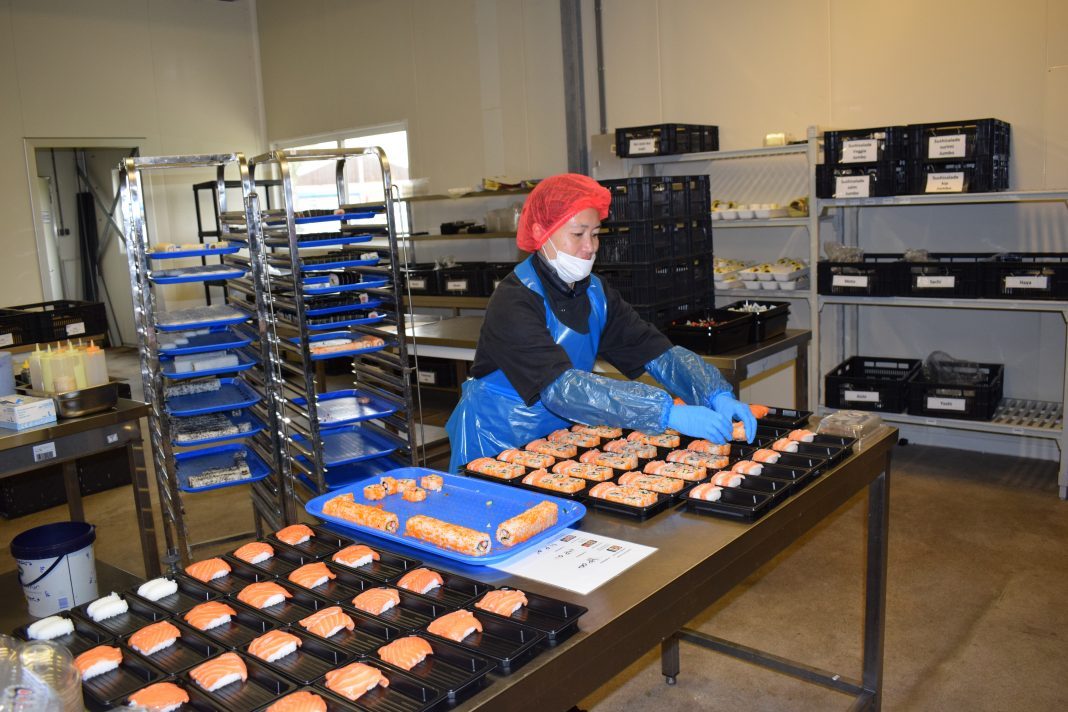 Japan-Asian fresh product company Beij-Ching produces for Dutch wholesaler Sligro, and Jumbo supermarkets. “Salmon is our main ingredient. It makes sushi look even better because of the color.”

On arrival at the location of Beij-Ching in the southern Dutch town of Udenhout, I am immediately directed to the production area. First putting on a clean coat and hairnet of course, and filling in the hygiene checklist.

“We planned the production so you could take photo’s, and now our workers want to continue,” Chang Ching, owner of the family business explains.

All the workers are preparing sushi, sashimi or sushi-related products like sushi salad with fresh salmon. Everything looks delicious, and the workspace is clean and fresh. The colour of the salmon stands out, and makes the sushi even more photogenic.

Family business
The company was inspired by Ching’s grandfather, who came to Eindhoven from China in 1936, because of the poverty and famine in his home country.

“He married my Dutch grandmother, which caused quite a stir at that time, when interracial marriages were not very common.”

He started a Chinese-Indonesian restaurant called Pom Lai in Eindhoven in 1961. The couple had four children, and everybody helped in the restaurant, including Ching’s father.

“My grandfather was a good chef; he was the inventor of the restaurant version of the Chinese-Indonesian dish Babi Pangang with red sauce, a pork dish now on the menu of every Chinese restaurant in Europe.”

Ching’s father and his brother took over the restaurant together. “My father as the chef, my uncle organizing the restaurant service. The restaurant became quite successful. It was during the time that eating out became more popular because people could afford it, and Chinese restaurants were inexpensive.”

At some point the family restaurant was sold and the family continued to work in the new restaurant belonging to Ching’s uncle: The Blue Lotus. “At that time we changed from Chinese-Indonesian to Asian cuisine. I studied law, but worked a lot in the restaurant during the weekends and holidays.”

Start of Beij-Ching
Ching worked as a lawyer for 13 years, but kept his culinary connection to the family business.

“I always took part in the culinary events at the Blue Lotus, and I was a passionate hobby chef.”

Around 2009, Ching and his younger brother started sushi and dim sum workshops. As a result, companies started to ask them for catering, and their small company grew and became successful.

Their company expanded when party caterer Maison van den Boer and the Van der Valk hotel chain contacted them. “In 2010 I stopped my law practice and focussed on Beij-Ching, as we had named our company. We professionalized our business and also started a cooking studio and catering kitchen in the village of Son en Breugel.”

Different direction: retail
A few years later they were contacted by horeca wholesaler Sligro, which was looking for a company to make its sushi. From that moment on their company took off in a different direction: they changed to production and stopped the workshops in their cooking studio.

Ching: “We started producing for Sligro five days a week. That gave us continuity, and we could build our company. Now we make sushi and sushi related products for several retailers, among them Jumbo, and for Sligro.”

For Jumbo, a fast-growing Dutch retail chain with almost 600 stores, among which are several maxi-sized ones, Beij-Ching developed a fresh sushi concept.

Salmon is Beij-Ching’s biggest and most important ingredient.

“Except for rice of course,” says Ching, smiling. “Salmon has made sushi popular in Europe. In Japan originally only wild fish was used for sushi, never salmon. The use of salmon for sushi comes from a Norwegian chef. Salmon is very suitable for sushi. It’s soft, fatty, has a neutral taste and can be eaten raw.”