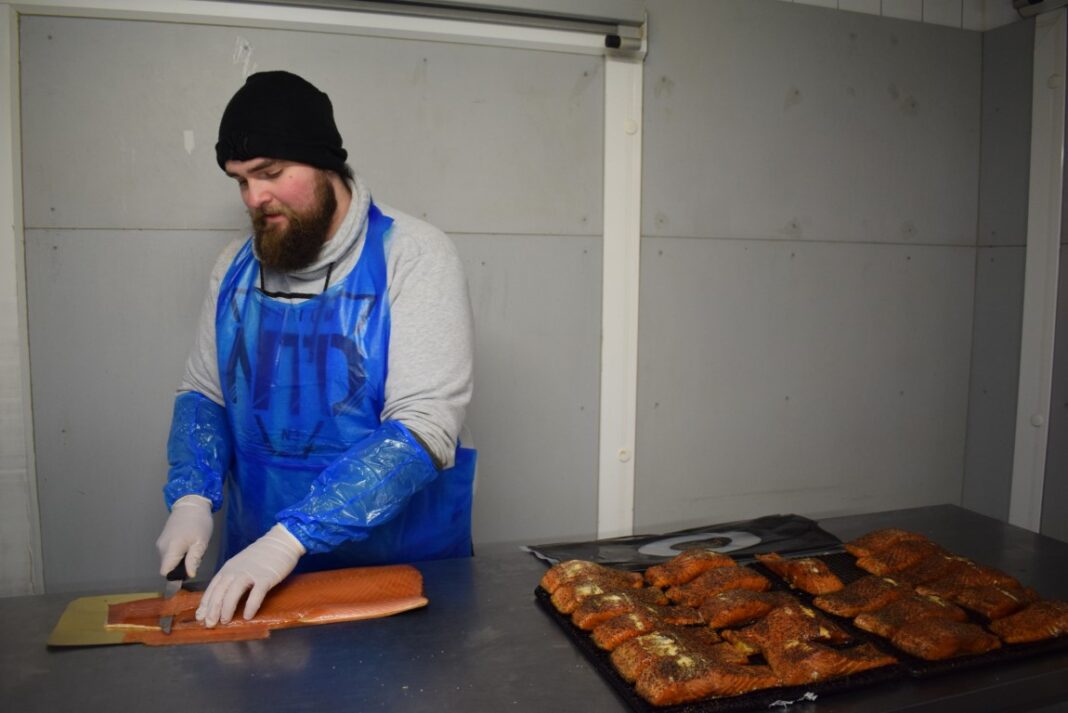 The busiest week of the year, for Mads and Peter Anton Peters of Sognefjord salmon smokehouse in Winssen, the Netherlands.

It’s the peak week at Sognefjord salmon smokehouse. Hundreds of Christmas hampers for companies have to be prepared: a whole kilo of salmon side in a nice festive box.

Together with his brother Martin, owner Mads Peters is busy salting salmon sides for Christmas. These are then dried for two days and smoked traditionally, hanging for eight hours.

Christmas is the most important period of the year for the company in terms of turnover.

“Normally, the whole summer is also a good time for us,” says Mads Peters. “Then there are a lot of lunches out with salmon sandwiches and we have a lot of sales of our salmon to the catering industry and local companies. But we can now compensate for last year’s Covid restrictions with the Christmas hampers.” 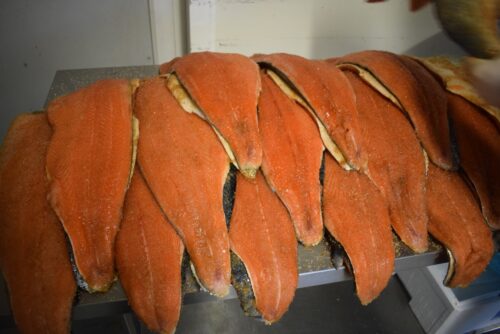 From Norway to the Netherlands
Sognefjord salmon smokehouse is located in the village of Winssen in the Dutch province of Gelderland. A fortuitous location, where founder Peter Anton Peters settled years ago, after his departure from Norway. As an eight-year-old boy he moved to Norway where his father’s work had brought him. There he grew up, married and had two sons. But the country of his youth continued to attract him.

When his children were 8 and 15, the family moved to the Netherlands. Unfortunately, his Norwegian wife could not settle in that flat land by the North Sea, which eventually led to a divorce and the return of his now ex-wife to Norway in 2002.

In Norway, Peter Anton Peters had worked for 25 years as a sales manager for Norwegian salmon export companies. This inspired him to set up an authentic artisanal salmon smokehouse in the Netherlands.

“I wanted to create a really special product, one which distinguishes itself from what is in the supermarkets.”

It caught on, demand grew almost by the month, and in 2010 he asked Mads and Martin to come and help him in the smokehouse.

“They came and haven’t left since.”

Mads is now the owner, while father Peter Anton is winding down, still doing the sales and administration of salmon smokehouse Sognefjord. And in busy times, like now, he also helps out in production.

“Then I bring the orders and help with packing. But the boys do the heavy work!”

Corona
The past two years have not been easy for the company, says Mads Peters.

“We mainly supply to the hotel and catering industry: 95 per cent of our production went to the hotel and catering industry and at one point that almost fell away completely. We were at a standstill for six months. After that, we had to adapt, by broadening our range to focus more on consumers and wholesalers. Fortunately, we found a big customer in Switzerland: a sandwich shop with a chain of stores.” 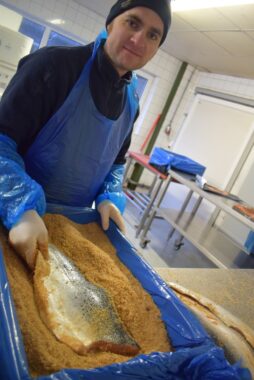 Consumer sales in the small shop at the smokehouse were also expanded with several products, and a web shop was set up.

“We added wild sockeye salmon to the range and gravad laks. And because we had more time we also started smoking eel in April 2020. There had been a lot of demand for that for quite some time.”

Hot smoked salmon had been in the range since 2017, but in very modest quantities.

“Last year we purchased a larger smoker for the hot smoked salmon, which means we can now supply it in larger quantities.”

In the future, he plans to expand the number of products even further.

“Eel and gravad lax are still holiday products at the moment, but in the future I would like to have these as regular products in the range.”

Product development
January, February and March are the quiet months for the small smokehouse.

“Then I can develop new products,” says Mads Peters. “The rest of the year is too busy, then I don’t get around to it. I also want to start smoking halibut and brook rudd. I am in contact with a breeder of sustainable brook rudder in this province.” 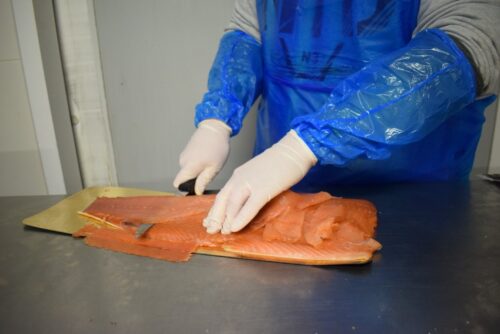 His salmon suppliers are from Urk.

“We work very well with a number of salmon processors there, including Het Urker Zalmhuys. We have had a good relationship with that company since the start of our smokehouse. My father worked for them as a representative in the early years in the Netherlands, and now they are our supplier. We know which salmon farmers they buy from. We are very satisfied with the quality of the products, and deliveries are always on time.”

Sognefjord is the only company in the Netherlands that smokes salmon in the traditional Norwegian way.

“It’s actually not efficient or economic, but we have found a way to do it economically. Namely by supplying directly to the catering industry, without the intervention of a wholesaler. That gives a better margin. And if you do something for ten years, you become very good at it. My brother and I are now so fast and efficient, we can salt and hang 1,500 kilos of salmon in five hours. That’s why we can charge the same price as the wholesalers, for a better product,” says Mads Peters.

Ready for the next step
Things are going well for Sognefjord. There has been a hefty growth in sales for years and there are advanced plans for new construction, says Mads Peters.

“We have our eye on a site in the Achterhoek, near ‘s Heerenberg. We want to build a larger smokehouse there, with a shop. We will continue to live here, since it’s only a forty-minute drive.”

Growth has stagnated somewhat now, due to the corona situation, he adds. “But we’ll manage, and we’re confident that  soon new construction will be possible.”

It will probably take longer than they had hoped, because of the current delays in delivery of building materials due to corona.

The power to say no
The intention is to remain really small-scale though, says Mads Peters. 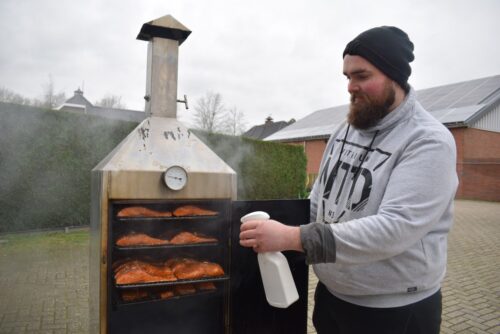 turnover in two ways: by volume, or by serving small customers with quality. We choose the latter. It suits our company. We do get requests from big customers, but as a small quality producer we can’t win that in terms of price.”

“I don’t want a customer who determines more than 30 percent of our turnover,” he continues.

“That way you become too dependent and vulnerable and they can start making price demands. I think it is very important to have the power to say no. And we do not want to and cannot compete with supermarket products from Poland.”

Moreover, he wants to keep it in the family as much as possible.

“I’m doing a lot of production myself at the moment, but I’d like to outsource some of that in the future. So we will need extra hands at some point, but it will never be mass production here.”