A container fire that broke out on Saturday on a cargo ship carrying mining chemicals off British Columbia is smoldering and appears to be under control.

Sixteen crew members were evacuated from the “Zim Kingston”, while five remained onboard to fight the fire.

The ship is anchored several kilometres off the southern coast of Vancouver Island. As well as a busy shipping lane, the area is considered an extremely sensitive ecological zone and there are a number of salmon farms in the nearby San Juan Islands on the US side of the boundary. Two-thirds of the Washington state population lives in the Puget Sound region.

Residents of the island are not in danger, officials said, and transit of commercial vessels to the ports of Vancouver and Seattle ports is unimpeded.

The fire on the #ZimKingston has been stabilized. Depending on weather tomorrow, hazardous materials firefighters will board the ship to fight any remaining fires and ensure the fire is out. pic.twitter.com/IKIhY5Ayrm 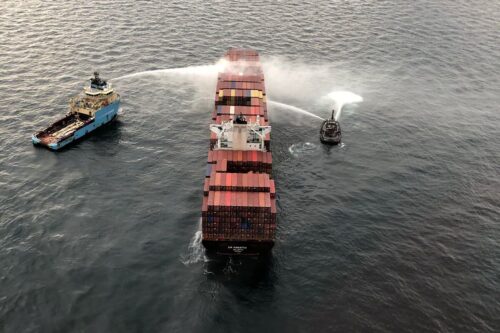 “We can’t see any scorching or charring of those adjacent containers, that’s a really good sign,” Brickett said. “The fire is smoldering as you would expect, and we’re continuing to cool on either side.”

Safe return
Earlier on Sunday Danaos Shipping Co, the company that manages the container ship, said in a statement that no injuries had been reported.

The fire “appears to have been contained,” and a salvage and fire extinguishing agency was brought in to ensure the safe return of the vessel’s crew, Danaos said.

Canada’s coast guard said it has been working with its U.S. counterpart to track 40 containers that had fallen overboard when Zim Kingston encountered bad weather on Friday, saying they posed a significant risk to mariners.

The coast guard is still tracking these containers, which are to be recovered by the salvage company hired by the ship’s owners. At the moment none of them seem to be drifting toward shore, Brickett said. 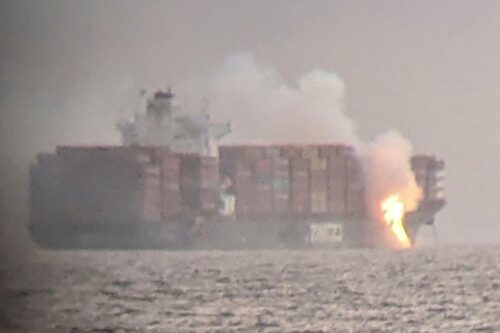