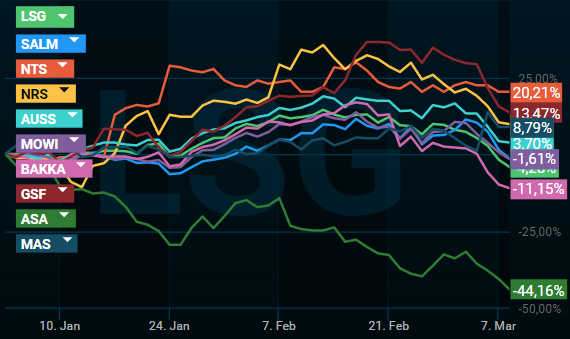 The seafood index falls 1.8 percent on Tuesday. The fish farming companies, like many others, have been struggling on the Oslo Stock Exchange lately. The worst situation has been for Atlantic Sapphire, which has been nearly halved in just over two months.

Pareto Securities analyst Carl-Emil Kjølås Johannessen tells TDN Direkt that it is generally the effects from the war that have a negative effect, with lower salmon prices due to less demand and more logistics challenges, while feed costs have increased.

“Increased wheat costs have had spillover effects on soy and maize and in general all vegetable raw materials. So it is not only wheat prices but also soy in particular. Fish oil prices have also been rising in the last couple of weeks. It may not be so related to the war, as they were generally up even before the war,” he says.

According to Kjølås Johannessen, the currency also has a negative effect on salmon shares.