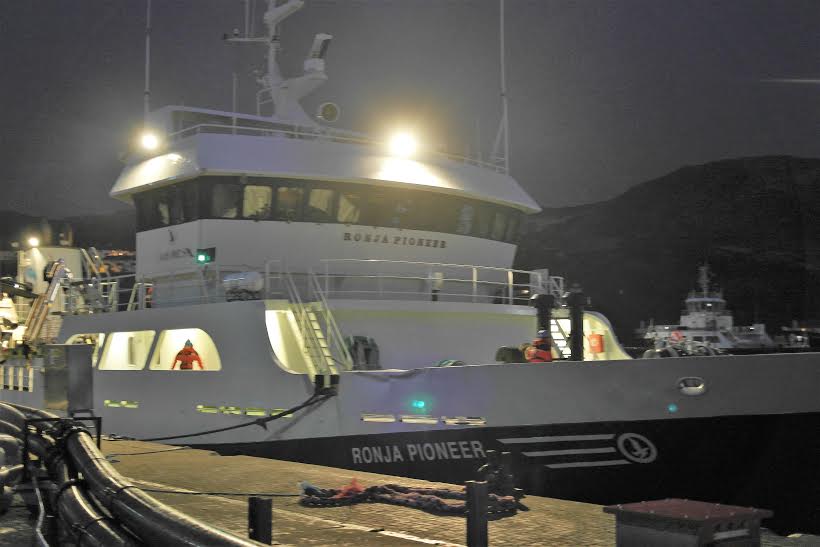 Hailstones relentlessly pelting the quay. Gusts of chill-to-the-bone winds thrash the “Ronja Pioneer”, as it employs its side propellers in a manoeuver to dock at quayside. Darkness has fallen; it’s nine-thirty in the evening at Marine Harvest’s slaughter plant in Mallaig.

The “Ronja Pioneer” has just sailed for seven hours from Loch Erisort by the island of Lewis in the Outer Hebrides. The loch’s name is a relic from the Viking era and originates from the Old Norse Eiríksfjordr. Its most recent visitor has been a Norwegian well-boat collecting farmed fish for transport to the slaughter plant.

The crew work quickly and effectively, mooring the vessel, and making ready to send their cargo of live fish through a pipeline that leads along the quay to the slaughter plant.

Midnight
Swimming around in the tanks on board are 18,000 salmon averaging four kilos apiece. The water is chilled to calm the fish that will soon disembark the well-boat.

“One thing you Norwegians can take credit for, is you make decent boats, says the slaughter plant boss John Gillies with a grin.

Inside the slaughter plant’s waiting room, a team of slaughter workers are waiting impatiently. They keep warm by drinking tea, while constantly glancing up at the clock on the wall.

But soon they are making their way up the stairs to the loft, and putting on yellow oilskins and gloves.

At the stroke of midnight, the sluices are opened.

A blood-spattering job
Wriggling salmon are sent in and received by firm, deft hands – firstly for stunning and then bleeding out. Bleeding is done manually with razor-sharp knives.

The glistening silver salmon put up a fight, twisting and turning, and workers have to apply considerable force to hold them down. They are pressed swiftly into metal moulds before being slaughtered in a swift and efficient manner.

“We often have to battle physically with the salmon, but at least it keeps us in shape,” one of the slaughter workers tells iLaks.

Thousands of salmon are sent in a queue through the sluices, over the tray and in to the knives.

They meet their ultimate fate in Mallaig.

Principal employer
“Everyone working here is a local. Marine Harvest is the biggest employer in Mallaig,” says Martin Boyce. He is in charge of the slaughter team here.

The slaughter tray is soon spattered with dark fish blood. Bled fish are sent down a drain to fill up tankers waiting one floor below.

Two and a half hours later the bloodbath is over. As the tanks are progressively filled up, trailer engines burst into life, and roll out of Mallaig.

They set a course in the night for Fort William, one hour’s drive away.

A small outfit
Here the gutting machines at Marine Harvest’s processing plant start up at six o’clock in the morning.

At Fort William, at the foot of Ben Nevis, the factory manager and his team are waiting ready to receive the salmon from Erisort.

“We do head-on-gutting here. This isn’t a large processing plant,” he tells iLaks.

Two plants
Smith grants that the slaughtering and gutting, being carried out at two separate plants, is cumbersome, and not all that different from what is common practice in Chile. He would have preferred to see everything gathered under one roof, and completed in one operation, but suitable premises are in short supply.

Bled salmon are emptied on to the conveyor belt. The belly is slit open, emptied and cleaned. The fish are sent along the belt, weighed and packed.

The bulk of the fish are packed in polystyrene boxes with Marine Harvest’s own seal, The Royal Warrant, on the sides. Four decades ago the marine farming giant became a royally appointed purveyor of salmon to the royal family in Buckingham Palace, and the company bears the seal with great pride.

No robots
Larger customers get their fish delivered in bigger containers. Fork trucks and trolleys take care of the boxes.

“No robots here,” says Smith, who makes no secret of the fact that he would gladly have robots in the packing section.

“We’ll tackle that one in the new slaughter plant,” he says.

On the question of when the build will start, Smith replies: “It hasn’t been decided yet, but hopefully within the next five years. First we will be building a fish feed factory to the tune of GBP 80 million.

On the loading ramps thermo trailers are waiting with engines running. They are open and ready to roll the fish boxes on board – and transport the salmon out to the market.

“Most of this will be sent to Grimsby, which is a major hub for fish. From there they are often forwarded on to Heathrow for air freight to markets elsewhere,” explained Smith.