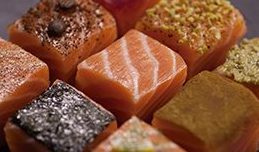 Delgado Selección, the subsidiary of the Delgado Group, has launched a new gourmet salmon range called ‘Delgado by Carlos Piernas”, named after Carpier Ahumados, a Barcelona-based smokehouse, according to alimarket.

Productsare made with Norwegian-sourced salmon. The range include natural salmon, salmon with nori seaweed, hand sliced ​, almond salmon artar and salca whole salmon. All of them made exclusively by Carpier Ahumados owner, Carlos Piernas at his smokehouse.

The brand is marketed for specialised stores and restaurants through the Horeca Channel, a distribution channel for restaurants.

“It is a product with a lot of capacity for the chefs in the high hospitality, because for its qualities you can work in cold and hot, or with different presentations and cuts,” said Carlos Piernas.

The company said that a large part of its commercialized volume is made under ‘Delgado Selección’ mainly directed to the restaurant and hospitality. It sells in more than 26 countries, such as France, Italy, England, Germany, the United States and China.