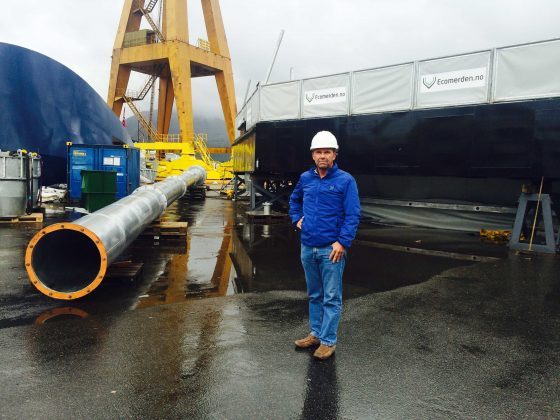 Jan Erik Kyrkjebø in front of the first version of the closed Ecomerden. Photo: Aslak Berge

Aquafarm Equipment and Ecomerden are emphatic in their opinion that the system for awarding development licenses has put the brakes on development. But lately they have become more positive in their view.

“There’s been no sudden take-off, but things are definitely on the verge of happening,” Jan Erik Kyrkjebø, general manager of Ecomerden, told SalmonBusiness.

Drumming up more sales
A review of companies that offer closed containment cages to the marine farming industry reveals low levels of revenue and margins.

“More sales are being drummed up through being in constant contact with customers. We have excellent dialogue with Marine Harvest,” Bergersen said.

Ecomerden’s Kyrkjebø informed SalmonBusiness that they have budgeted for construction of three Cages this year, which will provide revenue of EUR 4-5 million.

“We’re now setting up the logistics so that we can construct a Cage in the space of two months. That effectively enables us to offer a lead time of three months,” he said.

Delayed commercial sales a consequence of the development license system
In October 2017 Aquafarm Equipment had its application for a development license turned down, despite that they – through the EU programme “Horisont 2020” had been awarded EUR million. The company has appealed the decision.

“It’s naturally fortunate for us if we are awarded development licenses, even though Aquafarm Equipment is an independent entity, as the development license would then be placed in a subsidiary that is co-owned with Aquatic Concept Group. However, the indications are such that the system for awarding development licenses has actually hindered commercial sales for us, in that producers are waiting on replies for their own applications and projects before reaching out externally,” said Bergersen.

“That’s exactly what has occurred. But things are starting to happen, now that they (producers) are having their applications turned down”.

“A lot is happening in a positive sense,” said Bergesen. “We have a regular income from the plant we have leased out to Marine Harvest, in addition to the EU funds. Major progress is currently taking place in the post-smolt segment”.

Solid owners
Bergersen recently took charge of the company, after Atle Presthaug retired from the role. He came on board at the same time as Westcon took over 34.2 percent of the shares in the company.

“We now have solid owners and financing from the EU, as well as being commercially operative. The Westcon group has also joined us on the owner side. We’ve also expanded the company with a sales manager and new managing director during 2018,” Bergersen said.

Good result for Ecomerden
“Our figures are excellent, no lice, a high rate of survival, and a low feed factor. The reason for this is that the fish are living under ideal operating conditions without being physically handled. That produces results because you are able to concentrate more on other duties, such as monitoring and maintenance,” Kyrkjebø said.

The company is now offering two different versions of the EcoCage.

“I’m confident that producers are realising the potential to be had from a form of operation where you have closed containment in the first phase and an open cage in the last phase. It appears to be more cost-efficient and straightforward than building on shore. But here we’re talking about stocking with post-smolt averaging up to one kilo. We deliver large cages with capacity for one MAB (maximum allowable biomass),” he said.

Tough for Niri
Salmon Business reported last week that the Måløy-based company Niri has incurred major losses since it started up in 2006. 2017 was no different with a red bottom line of minus EUR 0.5 million.

Salmon Business has tried unsuccessfully on several occasions to contact the company. Monday this week, six days after the article was published, Niri sent an e-mail to SalmonBusiness, explaining the situation, excerpts of which are provided below.

“Development has taken time and was costly financially, and Niri has invested in the amounts that were specified in the article. The technology is now complete and will be employed on the first full-scale commercial plant in Måløy, where building will start this autumn. The investments are served by long-term investors, and the company has no outstanding debt”. The e-mail was signed by Chairman Trond Inge Kvernevik, board member Ian McIntyre and former board member of Niri Scotland, Gordon Boyle.

“The pilot programme was run for two years, where the smolt grew while we tested the technology. It provided us with valuable knowledge, and the result was communicated back to Måløy so that they could further develop the technology”, the company wrote in the e-mail.