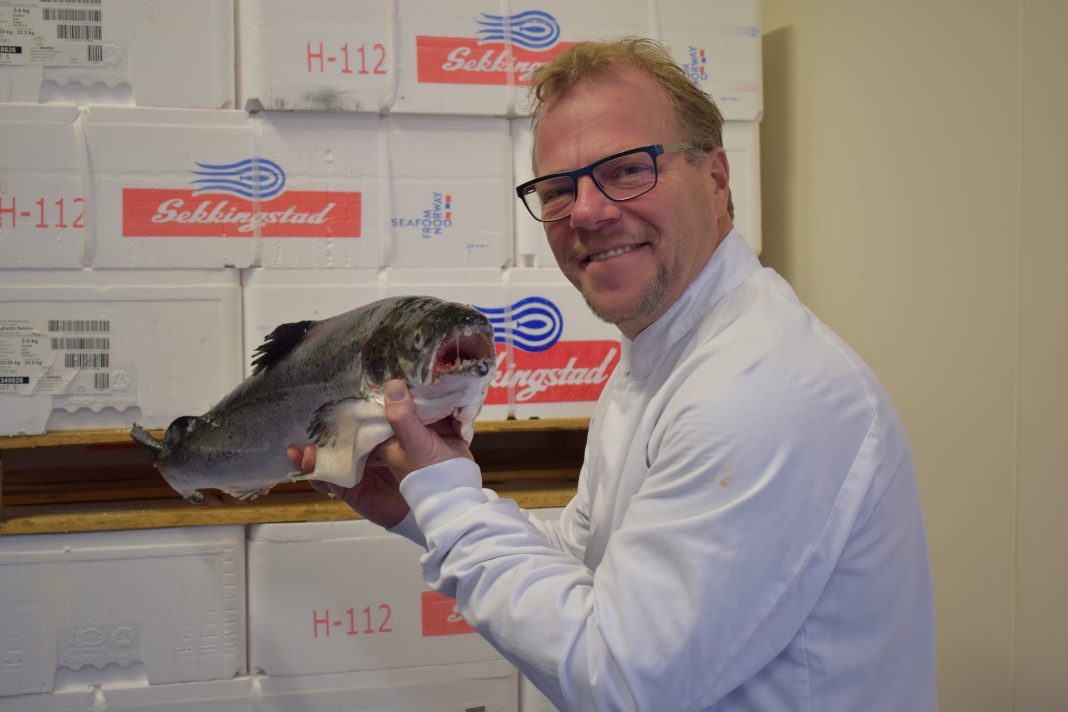 Duncan Nienhuis, owner of ATL Seafood, is the preferred supplier for Dutch horeca wholesaler Bidfood/DeliXL. Restaurants are his most important clients, salmon is one of his most significant products.

The refrigerated warehouse of ATL Seafood in IJmuiden is full of Styrofoam boxes of salmon, arrived from Norway early this morning. Nienhuis carefully sweeps the ice to the side of the box and shows a beautiful, firm salmon. “Look at this, isn’t it gorgeous?”

One of his workers reminds him: “Don’t forget to kiss the salmon for the picture!”

ATL Seafood was founded by Nienhuis thirteen years ago. “I was working as a chef, and preferred working with seafood. With my sous chef I started this company straight from the kitchen we worked in. At the beginning, we still worked as chefs, and invested all the profits in ATL Seafood.”

At first, he used his network to get clients. “Because they knew me, they gave me the clientele. After that, we became more and more professional. You need to deliver quality to keep your customers.”

Chefs for chefs
As a former chef, Nienhuis knows what chefs need and want, and is able to advise them. “That’s why we founded Chefs for Chefs, still an important part of our company. We advise chefs on anything they want to know about the use of seafood in their restaurants, from traceability and fish in the right season, to taste combinations on their menus.”

“Seafood needs to be fresh and of good quality, because that’s the start of a good seafood dish,” he continues.

“Salmon is the first fish that comes to mind when people think of fish. It’s a pure product, used a lot in restaurants, and it should be used in a simple way. It doesn’t need lots of spices to taste good.”

Mutual benefits
Six years after the start of the company, ATL Seafood took over the SH Meij smokehouse in IJmuiden.

“DeliXL was one of the customers of that smokehouse. They anticipated changes in the market and were looking for a seafood supplier. So we came to an agreement: DeliXL became a shareholder in ATL Seafood, and we became their preferred seafood supplier.”

The benefits are mutual, says Nienhuis. “We support each other. DeliXL, which recently changed its name to Bidfood, supplies the restaurant sector with all kinds of products. We have the expertise to offer their customers a complete range of seafood, with all the necessary information. Our salespeople visit the customers together.”

Nienhuis estimates the volume of Bidfood at around 35 percent of his total turnover.

“Salmon is one of our biggest products, for both Bidfood and our other horeca customers. We sell around 350.000 kilos of salmon per year. Most used by chefs are salmon sides and whole salmon, because they can do everything with those products, from making sushi and all kinds of dishes to smoking it.”

Sekkingstad
He also sells a lot of smoked salmon. “Our partner for smoked salmon is Roots, owned by Jan-Willem Kuijt.”

All his salmon is from Norwegian farmer Sekkingstad in Bergen. “They have beautiful salmon, with good coloring and firm meat. Also, their packing stations are close to the farm, which is good for the quality of the fish.”

“We go there regularly, to check the quality and make new arrangements,” he continues. “In November we will go there again, together with people from Bidfood, to do a photo- and film-shoot for our customers, to show where our salmon is farmed and how it is processed.”

Price curve
“People all over the world are discovering salmon. In the past, Europe was the main customer, now it’s the whole world. Norwegian salmon is the most sought-after, and Norwegian farmers cannot produce much more then they have been doing so far. As a result, prices will increase again.”

Having said that, he adds that in fact the prices are just following the regular annual curve from the last two to three years.

“I expect the prices will follow the same curve as last year, but at a slightly lower level, not much, maybe around 10 percent less. By the end of the year, into the beginning of next year, prices will have risen slightly, but will be stable again. As prices are now lower, demand will increase again. More and more mouths have to be fed, and people want luxury products. Salmon is popular, so the demand will only increase.”

Sushi and King Crab
The growing interest in sushi worldwide is a driver of the rising demand for salmon, he

continues. “You can compare it with the increasing demand for King Crab in South Korea. Serving a live King Crab at the table is the new fad there, so the prices have gone up like crazy. So you can see what the external market can do to prices.”

Also, nature may have some surprises for us, he thinks. “You can see all the things happening, with hurricanes, floods and rising temperatures. Climate changes have occurred through the centuries at regular intervals. But they will definitely influence stocks and prices.”