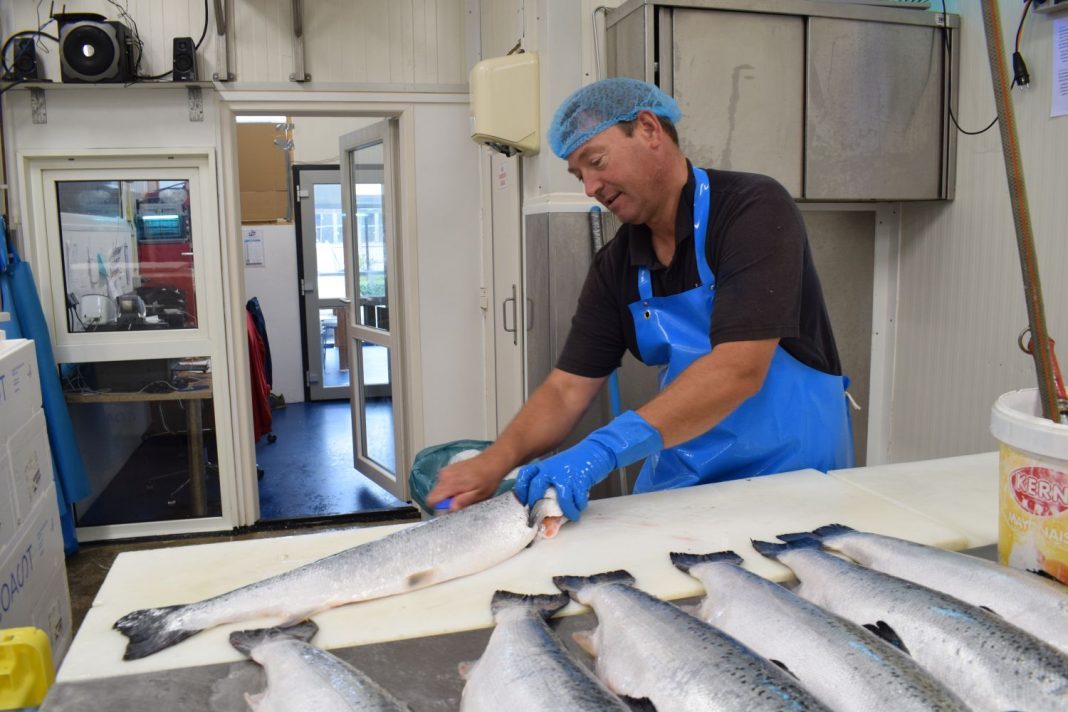 Wim Wiegersma, a former chef and the owner of Wiegersma Zeevishandel in the eastern Dutch city of Zwolle, added a smokehouse to his business last year: Neeltjes Salmon smokehouse.

Wiegersma’s career started out in hospitality, working in restaurant kitchens since he was fifteen and learning all the skills he needed. Fish had been his favourite food item for as long as he remembers. “I’ve always loved to work with seafood. Fish is so much more versatile than meat in terms of preparation methods, serving- and processing options.”

From restaurant to seafood business
He bought his first restaurant on the island of Terschelling, in the north of the country, after having worked there briefly as chef. “I sold that restaurant after four years and went to Aruba for a new adventure.” There, he met his (future) wife, who worked in the same restaurant. Together they went back to the Netherlands, took over a delicatessen shop and started a catering business.

As chance had it, the building next door was empty. Wiegersma had the chance to buy it and start a restaurant there, together with his wife, sister and her husband. They did the renovation themselves, a lot of work, but a fun, adventurous time, says Wiegersma. “The restaurant was a huge success. Mediterranean, tasty, not too expensive, beautiful products, lots of seafood on the menu.”

In 2002 they sold the catering shop and the restaurant. “We then had two children, at that time 6 and 4 years old. I was always working. I wanted to see my daughters grow up.”

A friend of his had a seafood business in IJmuiden. “That’s how the idea for a seafood business came about. I worked there for a while, and I liked it a lot. So I started my own seafood company a year later, also in IJmuiden, selling all possible kinds of fish and seafood, including salmon.”

Owning a smokehouse was a long-time wish of his. “That was a dream of mine! All the smoked salmon from large smokers tastes the same. I wanted to create something different. I started to try out all kinds of things with herbs, and had it smoked at smokehouse Snoek in Volendam, and presented it to my customers. They were enthusiastic, so I thought: I’m going to invest in this. I want to do everything myself, control the whole process, including the smoking.”

So now he smokes his salmon at his own company, following his own recipe. “And if a customer has his own recipe, we can also smoke it for him. We smoke both cold and hot, according to the demand. We can also smoke other fish species: we are now experimenting with gurnard, eel and mackerel.”

Wim Wiegersma takes seven fresh salmon from a cool box, throws them on the cutting table and within five minutes they are turned into beautiful fillets. “I recently bought a deboning device,” he says. “What an improvement! An enormous gain in time. Especially now that I have the smokehouse, it saves a lot of time and energy.”

The smoking process of salmon starts with dry marinating: 24 hours. “In our own herbal mixture with salt. Then they go on the trolley and are put in the cupboard for four hours to dry. The smoking process with oak and two other kinds of wood takes about 4.5 hours. After that, the salmon is cooled down and left to rest for a day. The next day the salmon is skinned, machine-tranched and packed.” Wiegersma also supplies uncut salmon slices with skin. “Some chefs want to chose their own cutting thickness, or to serve the salmon in cubes.”

From Norway to Urk
Salmon is now, also because of the smokehouse, the most important product in terms of kilos for Wiegersma’s Zeevishandel. “In total I process between 2500 and 3500 kilos of whole salmon a week. We use 600 to 800 kilos fillet for the smokehouse.”

Almost all salmon comes from farms in Norway. “Very occasionally I have Scottish or wild salmon from Alaska in season, but only on request. That is less than 5 percent of the total turnover. I think that’s a pity, they are beautiful products, but it’s a question of price. In the past I used to serve wild salmon in my restaurant in the wild salmon season. People like that and are prepared to pay a little more for it.”

His suppliers are from Urk: Het Urker Zalmhuys and Visscher Seafood. “I only use A choice salmon. I never work with inferior quality. I don’t want spots on my fish. Then I’d rather have something more expensive.”

In the past he didn’t like farmed salmon. “I remember that in the early 80s the fishmonger came round with farmed salmon to the restaurant I worked at. We thought then: how does he dare to offer that! Through the years I have started to think differently about that. I find farmed salmon very tasty; it is a great product, beautiful in colour and with lots of preparation possibilities.” He would like to go to Norway to see a salmon farm in real life. “That’s on my list, and it will certainly happen one day.

Web shop
All his hospitality customers now buy Neeltjes smoked salmon. “A month ago I also started a web shop for consumers. For the time being it’s only in Zwolle, but I want to expand it to the whole country.”

He still has many plans for the smokehouse: expanding with other marinades, adding other types of fish… “I have already tried sea bass fillet: warm smoked, very short, just not cooked inside. And tuna; for carpaccio. Very slightly cold smoked gives so much more taste than raw. Butterfish and halibut are now also part of the range. And smoked whole salmon, salmon trout or trout. “They look very nice on a buffet.”

And one day, he would like to start a fish shop. “A small fish shop with special fish species in Zwolle, that seems nice to me. I have already chosen the location!”