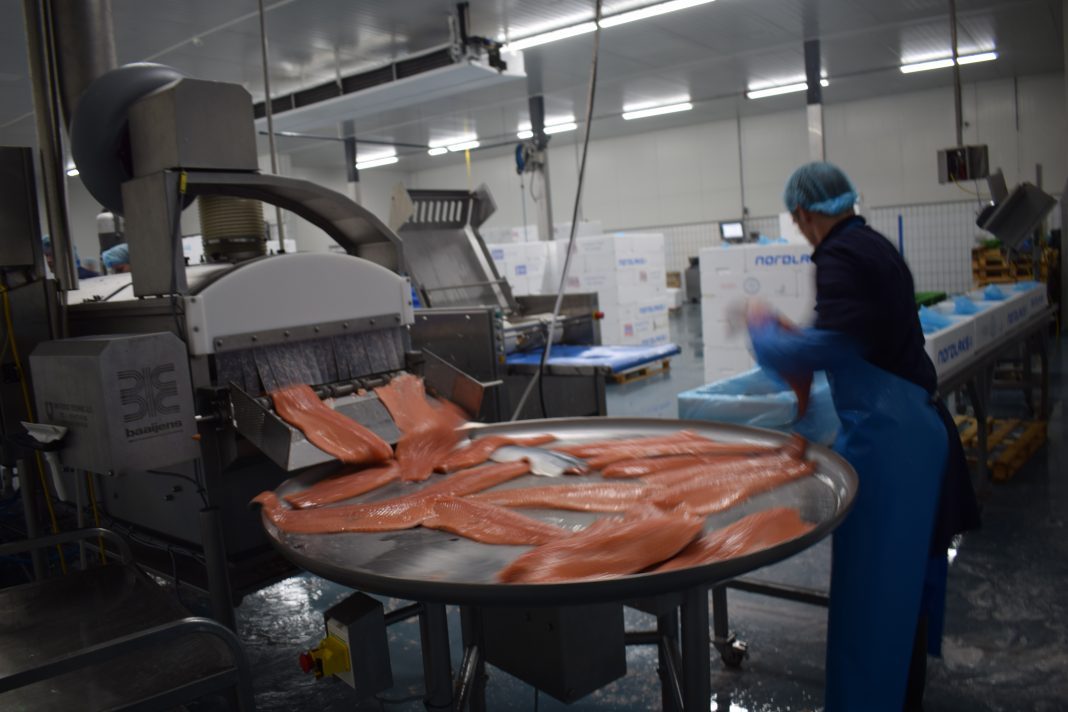 The investment climate in the Netherlands is flourishing: and the country’s third largest salmon processor (after Rodé Vis and Visscher Seafood), Urker Zalmhuys is also investing. The company’s factory at Urk is completely being renovated.

A year ago two young entrepreneurs, Harm ten Napel and Diederik van Spronsen, both with a lot of experience in the salmon industry, took over processing company and smokehouse Het Urker Zalmhuys, from founder Fokke Bakker.

This resulted in a steady growth of the company, says co-owner Harm ten Napel.

The success is being invested directly in the company, via a thorough renovation of the building and the purchase of a complete new production line.

Heading and filleting are done by hand at the moment.

“Trimming will continue to be done by hand. We have a very diverse customer base, with different types of demands. With manual trimming we are able to change the trimming style very quickly.”

When the new facility is ready, Urker Zalmhuys will be have 50 percent extra capacity, says Ten Napel.

“We are expanding our cold storage and production space, to improve capacity, quality and yield. We won’t be using all of the new capacity immediately, but it’s an investment for the future. In the next 12 to 18 months we will build something for the next five to ten years. The competition is growing and this way we’re taking steps to stay ahead.”

The company purchased the building next door and a large piece of land behind their building.

“We are now renovating our factory, to improve the logistics and create space for double the amount of cold storage. We will also add extra space for our new production line and a special production line for smoked salmon. That way we can automate that process as much as possible, including the salting, without losing the artisanal quality.”

“Phase 1 will be ready at the beginning of November, in time for Christmas production, Ten Napel continues. “After that we will move on to phase 2, in which we will build more production space behind our building, to assure the additional space.”

The plans for phase 2 are still being developed.

“We are looking for the best options and we are working on improving the building plans.”

The new production space is designed to bring hygiene to an even higher level, says Ten Napel. The ultimate aim is to create a processing company that can supply any customer, anywhere.

“So far we mainly have been delivering to wholesalers and smokehouses in the Netherlands, Belgium and Germany. After this, we will be ready for the rest of the world.”