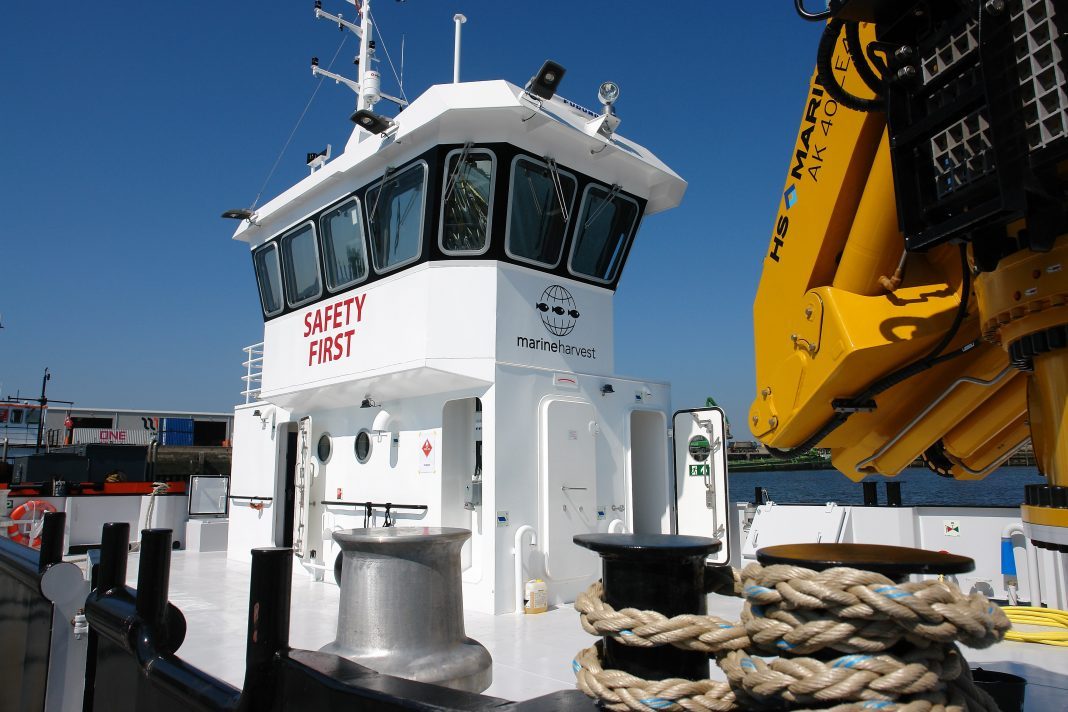 A new 1907 Landing Utility Vessel (LUV), built by Dutch shipbuilder Nauplius Workboats, has been handed over to Marine Harvest Scotland. The LUV, a crossover between a landing craft and a Multi-Cat, is well-received by its new owner: one sister vessel and three larger versions are currently being built.

Marine Harvest Scotland ordered two 1907 LUVs, designed by Argos Engineering. The first vessel has already been handed over to Marine Harvest Scotland at their Rum site, while the second vessel will be delivered in September. The 1907 LUV distinguishes itself by a special layout: a work deck on starboard along the entire ship’s length, facing the side of the pen. This was realised by placing the superstructure at portside, says Gerrit Knol, technical director of Nauplius Workboats. “There is also enough space for a large crane, an HS Marine AK40 HE4.”

An extra addition to the original design of the 19 meter long workboat, used as a site boat at the Marine Harvest site Rum, is an AKVA net washer mounted on deck. “Done at Marine Harvests’ request,” he adds. “We also installed Volvo Penta engines for low fuel consumption and low maintenance.”

The building process actually went quite well for a new workboat from a new series, he continues. “Of course, you always run into things with a new design, but the end result and performance is even better than we had hoped for.”

Cranes and containers
Nauplius Workboats is currently building three other workboats for DESS Aquaculture Shipping Norway in co-operation with another shipyard. “Our vessels are one hundred percent tailor-made and are, therefore, fully in line with the requirements of our client. The smaller version was very well received, also because we had consciously looked at how we could keep the operational costs for the client as low as possible. This led to a follow-up order for three more, but larger versions,” Knol continues.

“The 2712 Landing Utility Vessels we are building now is a further development of the 19 meter version, and these are completely seaworthy. Therefore, these three boats will be used as service boats for the different regions of Marine Harvest Scotland. The 27 meter long vessel has space for two cranes, an HS Marine AKC 145-20 HE4 and an AK 48-18,5 E5, as well as several trucks and deck space for seven 20 feet containers and three 10 feet containers. The vessel can also be used for fish feed deliveries and has six cabins for crew.”

Knol is currently talking with several other fish farmers in Scotland about contracts for new workboats. “We are beginning to become a well-known name in fish farming in Scotland. I think this is due mainly to the custom-built and practical solutions we offer. Our designs are thought out, and our vessels are specifically designed for fish farming.”

Communication with Marine Harvest Scotland about their requirements has, among other things, led Nauplius Workboats to build the new concept of a Landing Utility Vessel, which is a cross-over between a multi-cat and a traditional landing craft, Knol adds. “This design has been well received, because it meets the needs of the users.”

With their office in Groningen, the Netherlands, Nauplius Workboats operates on a worldwide level, working with local and international organizations. Nauplius build three workboats for Marine Harvest Scotland in the past few years; two siteboats and a hydrolicer barge.