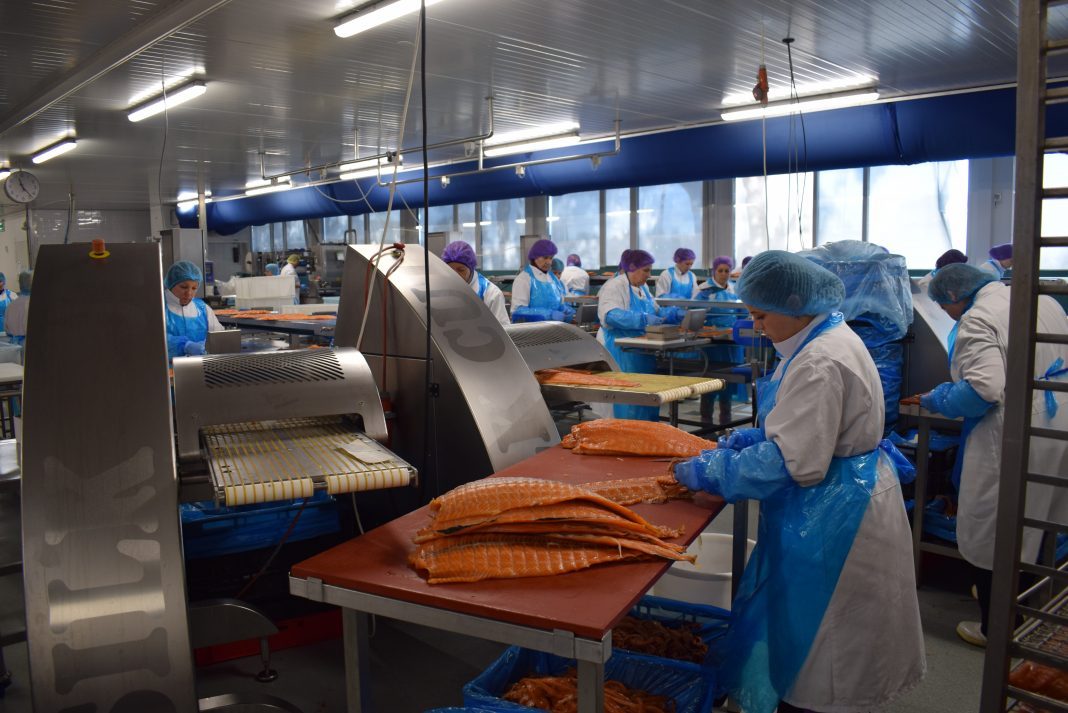 Dutch Salmon smokehouse Van Wijnen was taken over by Nimbus investments two years ago. Since then, the company has flourished through its investments and efficiency advice.

Van Wijnen is the oldest salmon company in the Netherlands. Its roots date back to 1740, when the first owner was a salmon fisherman on the Lek and IJssel rivers.

“We still have those fishing rights,” says director Dick van Prooijen. At the time, Europe’s largest salmon auction was in Rotterdam, in Kralingen. Right next to the auction building was the Salmon House, where you could eat a salmon sandwich. The salmon has disappeared, due to industrialisation and the disappearance of the gravel bottoms, the spawning ground for salmon, but the Salmon House has been restored to its former glory a few years ago. “Back then we were right next to the auction building with our salmon processing,” says Van Prooyen. “In 1864, in addition to the catch, we also started salting and smoking salmon. The salted salmon was exported in wooden barrels to Eastern Europe, Germany and the United States.”

With the rise of farmed salmon, around 1980, salmon became more popular and Van Wijnen intensified the smoking of salmon for the hospitality industry and fishmongers, and, after a while, also for supermarkets. A completely different dynamic was created, says Van Prooijen.

“In the past, you used to process a seasonal product that was only available three months a year. You bought in stock for the whole year and you froze it. Now there is a year-round supply and you are dealing with a completely different market. What matters now is the price. There is a lot of competition. It is almost only forward trading. And you have to deal with very large volumes. That puts pressure on both the cost price and the selling price.”

As a result of this development, Van Wijnen changed from a special producer to a convenience supplier. “Sales are increasingly shifting to the supermarkets. That means more food safety controls and other requirements for the product. Guaranteeing food safety is now a priority, because salmon is a high-risk product.”

Listeria outbreak
In 2016, the company was confronted with a problem concerning listeria. The year before, there had been a Listeria outbreak in Italy. People became ill, some of them died. Van Wijnen exports to Italy and was investigated as a possible source. In the end, it turned out that the source was a sausage manufacturer, but the inspections carried out by the Dutch Food Safety authorities (NVWA) had led to a recall of a number of Van Wijnen products. The presence of listeria in Van Wijnen’s products was below the safe standard. However, as a precaution the NVWA had temporarily set an expiry date of five days for the company’s products. “That was too short for supermarkets and export.” Turnover plummeted dramatically: Van Wijnen lost 15 million of the 45 million turnover in one fell swoop.

“This prompted the family to raise external capital. Van Wijnen entered the market and Dutch investment company Nimbus took over the majority of the shares.”

It was a takeover without personnel consequences, which worked out very well, according to Van Prooijen.

“With Nimbus, we have started a process with investments and expansions, but we have also taken steps in the field of sales. They have strengthened the management with someone with specific knowledge of sales and marketing, so that we could keep the focus on our products.”

The contribution of the new owner was an efficiency improvement, says van Prooijen. “In the past, we reacted to the things that came our way. Now we focus specifically on our profile and the countries we produce for. This also creates peace of mind in production.”

The added value that Nimbus offers is also financial know-how and support. That created a completely different dynamic for the company, according to Van Prooijen. “We are a small organisation with a large production apparatus. So you have to get quality in-house, for example a good operations manager. With good planning, you can produce better and easier.”

New processing lines and smokers
The takeover was necessary, says Van Prooijen. “Without it, we might not have been around anymore. We have made considerable leaps and bounds over the past year and a half. Two million euros has been invested in new machines. The quality of the product has improved and so has the speed of production. An example? The fish is now first mechanically disinfected. This speeds up the processing lines and also prevents

contamination in the machines. We have new filleting lines and salting and debone machines in the line, which means that we need fewer hands. As a result, the staff is changing from production staff to system operators. We are supporting this with a training programme for our staff.”

“We have invested in new computer-controlled smokers, with remote control. That would not have been possible without our investor. And Nimbus gives enormous support, they are a sparring partner that takes our company to a higher level.”

Initially Van Prooijen thought that new construction would be necessary. Now, due to better planning and efficiency improvements with the processing lines, this is no longer an urgent necessity. However, the existing building has just been renovated, including a new roof. “We will certainly need another two years to achieve our goals and volumes. Then we’ll grow out of our current location and will reconsider new construction.”

“We are for 99 percent a salmon producer. Our core business is salmon smoking, at the customer’s request. The Benelux, Europe, the US and Canada are our largest markets.”

“We do our own filleting, so we also supply some fresh salmon for specific customers. In addition, we do a little smoked trout that we get from Turkey, and tuna. We cut the tuna into slices, which are then smoked and frozen, for export to Spain and Italy. But that’s a very small market.”

Most of the farmed salmon comes from Norway, with Norway Royal Salmon and Ocean Quality as main suppliers. A smaller volume comes from Scotland, Chile, Canada, the United States and, more recently, Iceland. The wild salmon is from Alaska.

“We mainly do farming, but that has shifted in recent years. A few years ago it was still 90 per cent farmed salmon. The last three or four years it has been around 70 per cent. That’s a significant increase in the proportion of wild salmon.” How does he explain this? “I think it’s a matter of developing taste. If you start with wine, you first drink the more accessible flavours and the cheaper varieties. The same goes for salmon.”

Van Wijnen has its own trucks which the company uses on fixed routes in the Netherlands and the Benelux. At other delivery times and to other countries, delivery is outsourced to logistics partners.

Traditionally, there is an extra demand for salmon around Christmas and Easter.

“We still have a lot of extra people working during the holiday seasons, but that is shifting. In the Benelux, there is a shift towards salmon consumption all year round. Think of tapas in the summer. We also make salmon sausages from our trimmings for the bbq. They are quite successful.”