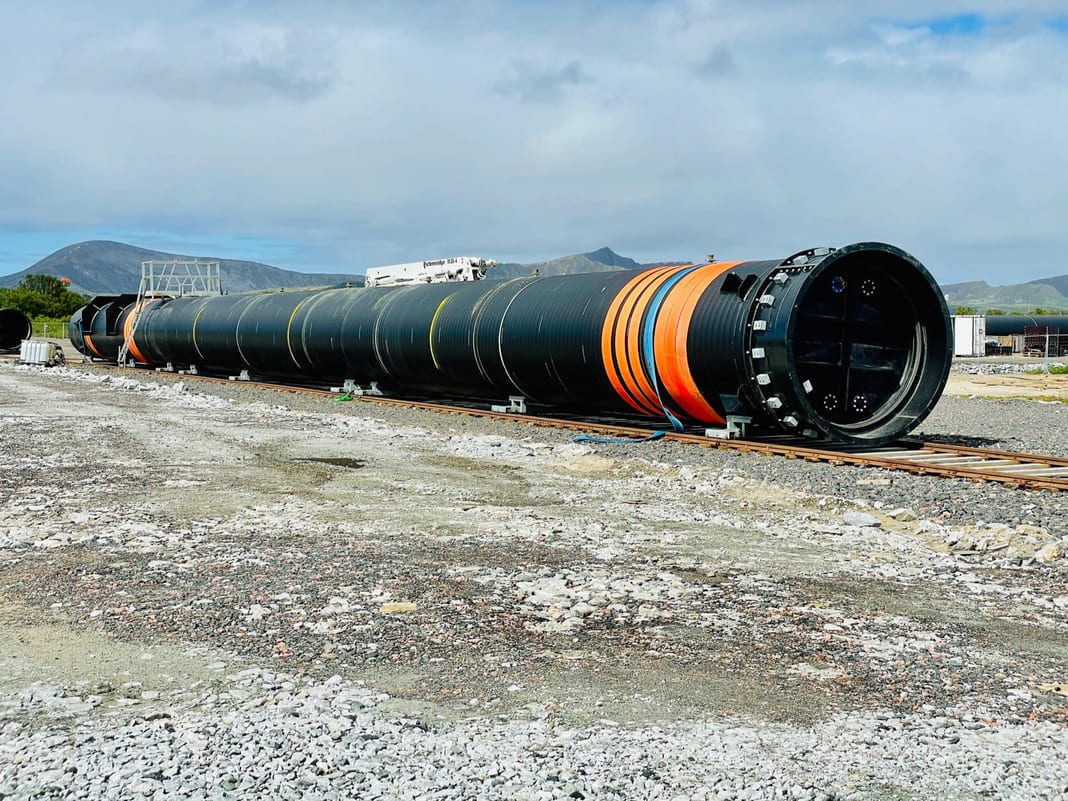 A few days ago, Andfjord Salmon formally took over the first pool from the contractor. The company aims to produce 70,000 tonnes of salmon in a closed-land facility filled with cold, lice-free seawater.

“It was a big milestone for us,” said CEO Martin Rasmussen.

It is particularly the location at Kvalnes on Andøya in the far north of Nordland, Northern Norway, that creates expectations.

“The most important thing is to land the final phase of the first pool. That’s a good plan. At the same time, an opportunity has opened up to take the ground down to a level for the next basins,” said Andfjord Salmon CEO Martin Rasmussen.

“Over the next few weeks, we will have to make the final decisions and choose a further plan. When this is done, there will be a lot of work to increase production capacity,” said Rasmussen.

“I see that as appropriate. I see it as an exciting process and I have a great desire to get that job done,” he said.

Investment banker recommendation
On Monday morning, the investment bank Norne Securities published its first sector report on land-based salmon farming. It highlights eight companies, five of which are listed and three are on their way there. Norne gave only two of them a BUY recommendation. One of these is Andfjord Salmon.

Shortly after Norne’s report was published, SalmonBusiness’ visited the company’s head office. We presented the investment banks’ recent recommendation on price targets and the steep earnings to EUR 130 million in 2030 for the CEO.

“My focus is on the operational and has no specific comment on Norne’s course objectives and analysis,” was Martin Rasmussen’s immediate reaction.

Steep earnings
The high earnings are ambitious and we want his assessment.

“The production plans we have with the step-by-step escalation are of course realistic, and with good calculations. The prices of salmon all have a relationship. What is important is to have a low production cost, and it is low energy cost and good biology, and not much more complicated than that,” said Rasmussen.

SalmonBusiness takes the CFO and CEO out of the simple offices to a tired-looking pink bench.

Gulf Stream
Along with Andfjord Salmon’s location at Kvalnes, it is sometimes very abrupt. Up to several hundred meters, and here the Gulf Stream enters along Andfjorden.

“We can pick up the water a few hundred meters outside our locations. I don’t know of any other location where you can get Gulf Stream water as close to land as we do on Andøya. We pick up water that has much higher temperatures in winter, and in relation to diseases it gives less risk of winter sores for example,” explained Rasmussen.

Depth 160m
Andfjord Salmon will be able to fetch the water up from 160m, if necessary. This can be the case with, for example, disease outbreaks in nearby locations. At that depth, the water has not been in contact with other facilities.

“The most important advantage we have for economic success is good biological advantages based on a single concept of flowing clean seawater. Then we are 100 per-cent dependent on good water quality,” said Martin Rasmussen.

“It can’t be done very much elsewhere in the world as close to the sea than right here. There will be good biology and low energy costs,” he said.

No cost for energy
The bottom of the basins at Andfjord Salmon is below sea level outside. There are considerable energy costs in lifting the water far above the sea surface. For sea facilities, this cost is naturally about zero. Andfjord Salmon believes that they will have a cost of (EUR 0.01 .ed) per kilogram of produced fish with their solution.

“Significantly lower than other concepts on land that I know of. The cost of one krone (EUR 0.1 .ed) has been verified by SINTEF, among others, and not just its own calculation,” Martin Rasmussen emphasised.

Exposed smolt
“If we decide on an alternative plan with the postponement of smolt next spring, the final date will also depend on the biology. We assess it on an ongoing basis and assess exactly when the smolt has the optimal size, and the quality to have a good growth phase in the sea.

“The size will be 120g to 150g. Larger smolt is certainly an option, but this is the size we choose in the first place,” said Martin Rasmussen.

260,000 smolts are to be released. Until now, they have had an agreement with smolt producer Fjordsmolt in Grovfjord in Troms. In the future, it has not yet been decided who will deliver the smolt in 2022.

“We have good cooperation with Fjordsmolt. A final decision on whether it will be them or others will be made when we decide the final plan. There are many local players who may be relevant,” said Rasmussen.

“We come from operational quarters most of us. Accustomed to working systematically with risk assessments and different scenarios. Going forward, I do not see any clearly difficult challenges in the development,” said CEO Martin Rasmussen.