In this phase, there will be real full-scale testing of the concept and technology. The goal is to increase fish health and welfare through artificial intelligence and machine learning.

Sensor
“Among other things, we have seen that the design of the sensor housing and the openings the fish must swim through to get to the surface affect the fish’s swimming pattern,” said iFarm project manager Karl Fredrik Ottem in a press release.

“We are dependent on the fish choosing to swim through the sensor house, so in phase 2 at Langøyhovden we are now setting out six different sensor houses with different geometric designs, to test which houses the salmon prefer,” explained Ottem. “Then we will also know which sensor houses we will use in phase 3, when we will have the next exposure in the project.”

iFarm: - iFarm is a concept based on artificial intelligence and machine learning. With the help of iFarm, we can bring about a shift from population-based follow-up to individual-based care in aquaculture. This will be of great importance for fish health and welfare. - iFarm is a collaboration between Cermaq and BioSort. ScaleAQ is the main supplier of farming equipment for the project - Cermaq has been awarded 4 development licenses with iFarm.

The six houses that have now been launched have been installed on land at Myre in Vesterålen, before being transported to the facility and installed in the cages. Now they stand at a depth of eight meters.

“We have many good cameras so that we can constantly follow how the fish swim and ensure that it eats and thrives,” said Ottem. So far, it seems that the fish are getting used to new equipment in the cage, both in Martnesvika and on Langøyhovden.

Some challenges and complications along the way
Even though the fish seem to thrive and grow well, not everything goes completely smoothly in such a project. With so much equipment down in the cage, it has been difficult establishing the best solutions for both camera cleaning and equipment maintenance.

“There are large and complex installations that either have to be raised to be maintained, or we have to go under water to get to, and it has been demanding to find good routines to make this happen while we take care of the fish’s well-being, said Ottem. “But we also take these experiences with us when we look at the design and adjustment of equipment and setup for the next phase.”

Promising lice results
As the fish is kept ten meters down in the cage with iFarm, fewer lice have been observed on the salmon there.

“We reckon that we have saved at least one de-lice on the iFarm fish at Martnesvika, even though we only have iFarm set-up for single cages there. At Langøyhovden, where we have iFarm in all the cages, we are excited about what effect it will have on lice levels eventually,” concludes Ottem. 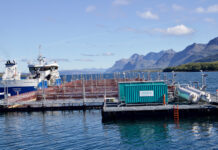