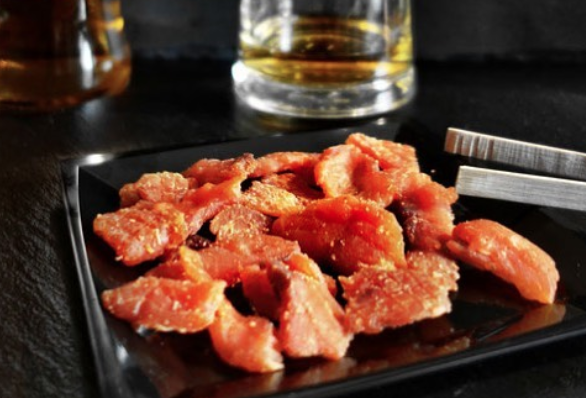 The Meatsnacks Group, the largest producer of jerky and biltong in Europe, has launched a range of salmon jerky products in the UK and around the world.

The company – who claim to have been the first to do so – make salmon jerky sourced from Scottish farms, made in the Highlands and smoked on the Spey Valley Smokehouse based in Granton on Spey.

“We source our salmon from sustainable sources that can deliver a lot of volume,” said Jennifer Macdonald-Nethercott, Marketing Manager for Meatsnacks Group talking to SalmonBusiness. “The jerky process reduces the product to around 50% so it’s a premium product,” she added.

The company are getting their products into 360 Sainsbury’s UK stores as well as Metro Chains across Canada.

“We export our products to Hong Kong, Iceland and Canada. Hong Kong is key to our growth as it’s a way open up salmon products into China.”

China has had a 20 year ban on British beef products imposed (recently lifted) in the wake of the BSE outbreak, which is why getting salmon jerky into is important to Meatsnack’s long term strategy.

The company also has an eye on the US and already has a few distributers lined up. Understandable, as the market for jerky in the United States is estimated to be a $1.5 billion industry. They also export their salmon range to Iceland. “It’s been warmly received over there because of the success of our beef products,” she said.

Jennifer Macdonald-Nethercott explained that salmon was also a key to introducing jerky to the female market – who were otherwise not quite as receptive to the meaty snack synonymous with cowboy movies, body builders and elite sports players.

“Dried meat as a concept isn’t quite there yet to that audience. However a zesty lemon and dill range lemon jerky is more accessible to a foody lover.”