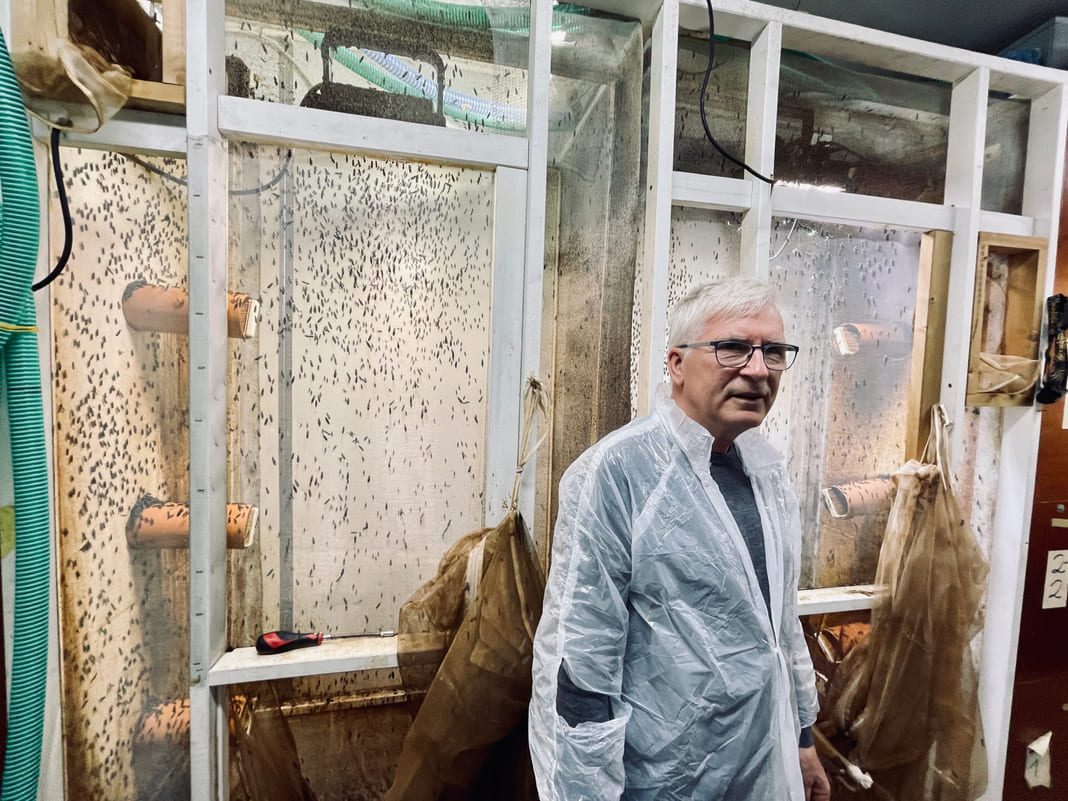 Ecoprot in Meløy, Northern Norway, will start construction for a new factory at the beginning of next year.

“The development phase is complete. We produce what we need from eggs and have developed a production concept that yields good yields and large fine larvae,” said Ole Torrissen.

The company is now transitioning to pilot production up to 1,000 tonnes a year. The big target is 30,000 tonnes. There are enough fats and proteins for 10,000 tonnes of salmon.

In early 2019, five members of the Torrissen family established the company Ecoprot. The siblings raised around EUR 0.3 million through the company Romar Invest. They were joined by Helgeland Invest and the Co-investment Fund for Nord-Norway. With that, the initial capital was EUR 0.7 million. With a grant from Innovation Norway of EUR 0.5 million, they started in early 2020.

Looking for investors
These days, the two entrepreneurs are chasing another EUR 0.5 million to EUR 1.5 million in fresh capital. This will be used to scale up pilot production.

This includes upgrading buildings and investing in new process equipment. The brothers don’t think there’s much trouble in catching up with any investors. Most of all, they want a big heavy industrial player on the team.

There are companies that supply feed ingredients the brothers are targeting.

“We have worked purposefully with a small handful of international players. We hope that will yield results. In large companies, such processes often take at least three to six months,” said Asbjørn Torrissen.

“They will probably be a significant owner of Ecoport. We don’t have a special policy on ownership. What is most important is to get capital and dedicated owners to take part in the further development,” said Asbjørn Torrissen.

They also place great emphasis on the importance such a player will have with market contact and product range.

“With new capital and owners in place, we hope that Innovation Norway will also provide new grants,” said Asbjørn Torrissen.

Retirement age doesn’t matter
The brothers are no newcomers to the fisheries and aquaculture industry. Ole Torrissen (71) has worked for 40 years as a researcher at the Institute of Marine Research in Bergen. When he turned 70, there was no other option in the government enterprise than to leave the key card at the lobby one last time.

However, that did not stop that researcher from testing out his ideas. He launched the idea of a factory with feed from soldier larvae at the family home along with his four siblings as early as 2018.

Joining the journey was little brother Asbjørn Torrissen (67). He has worked with the aquaculture industry since 1980. First at the family company Torris Products. Then he led a salmon processing facility and has had several roles in Stolt Sea Farm.

A tropical fragrance
The first soldier flies arrived in Åmøya in September 2019. Actually, they came from America, but traveled many times as a stowaway so that it is now found all over the tropical world.

They hardly survive north of the Alps, so there is little risk of escaped flies surviving for a long time on Åmøya. The flies live in their just over five happy days in the glass cages of the Torrissen brothers.

When Asbjørn Torrissen opened the door to the final resting place of the soldier flies, it felt very special. The combination of tropical heat, moisture, caterpillars, flies and expired milk from last year hits you like a wall.

It is a fragrance that is not forgotten, either by body nor soul.

They do not eat, but simply lay larvae and then die. One caterpillar lays about 1,000 eggs and tolerates a formidable density. In other words, they thrive very well in other people’s company. Nor does it look like the aforementioned odor bothers them significantly.

The larvae double their own weight 10,000 times during their short lifespan. Some lucky ones are selected for further propagations and come to the pupa stage. Larvae’s own version of breeding stallions. After two weeks, new soldier larvae creep out to an exciting everyday life.

The larvae can grow up to 27 mm in length, 6 mm in diameter and weigh up to 0.22 g at the end of the larval stage. They have a grayish-white color, but few hints of dark brown spots and stripes as they approach the pupa stage.

Today, they produce dry larvae as feed for birds and other pets.

The company also has its own online store where products from production are marketed as, “Natural fertilizer is pure phrase from the larvae – as natural as it can be. Excellent for use on houseplants and orchids and for use in horticulture”.

Completely waste-free production
The challenge is the processing of the larvae. Larva production can be scaled up and down from a few kilograms to a few tonnes a day.

“If we are to build a feed factory, the price is EUR 2 million. We must have a steady supply of 1,000 kg of larvae per hour. Out comes about a third in the form of protein and fat as a dry matter. The rest is only water, and then it is a completely waste-free production,” said Ole Torrissen.

In addition, they have a test production of hydrolysate. This substance can be used in the development of processing processes.

Rule change could open new market
It is possible to use the larvae only for fish feed, fur animals and pets. According to Ole Torrissen, the EU has indicated that it is only a matter of time before it is approved also for pork and chicken.

“This opens up a significantly larger market, even though it is primarily fish feed that is our goal,” said Ole Torrissen.

What limits production today is the capacity of cultivation of the larvae and processing into marketable products.

During this year, they will develop production so that it can be industrialised on a larger scale. There is a lot of available research and data for small-scale production.

“The big producers in Europe are keeping their technology close to their chests, and if you want to deal with it, it costs a lot,” said Ole Torrissen.

To get over to a pilot scale, the entrepreneurs must have achieved a process that allows them to only take out fat and protein. The larvae also contain chitin (fiber).

“Chitin is the downside because it also contains nitrogen. Conventional methods, therefore, give you measured protein values that are higher than the real values. There are no feed producers interested. Therefore, we work with various techniques to get this drug excreted. Chitin is a valuable product for purposes other than feed,” said Ole Torrissen.

In the pilot-scale phase, the industrial production process will be developed. When it is finished, construction can begin. Step by step with a block first that can take 3,000 tonnes annually.

“Then we are expanding incrementally up to hopefully ten blocks with a production of 30,000 tonnes. Then the need is a factory with 5,000 square meters of ground floor,” said Asbjørn Torrissen.