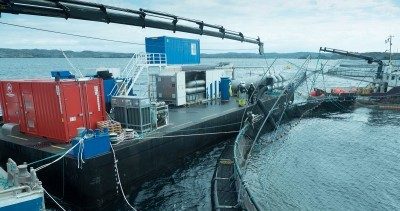 “Farmers and others who carry out salmon lice treatment with hot water must take this new knowledge into account,” said the Norwegian Food Safety Authority Director of Fish and Seafood Elisabeth Wilmann.

Thermal treatment systems are when farmed fish are transferred to a water bath of usually between 29 and 34 degrees for about 30 seconds. This temperature change kills the sea lice and the salmon are released back into the pen. The method is also referred to as thermal depletion.

In recent years, this method has been the most popular. In 2018, 1370 hot water treatments in the country were carried out, accounting for 68 per cent of all drug-free treatments.

Method involves risk
It is known that hot water treatment involves the risk of injury and increased mortality.

“In recent years, the Norwegian Food Safety Authority has received many reports of farmed fish that have been damaged or been killed by the use of hot water,” said Wilmann.

In addition, researchers and fish health professionals have asked whether hot water treatment is painful for the fish.

The Norwegian Food Safety Authority commissioned the Institute of Marine Research and the Veterinary Institute to assess whether hot water treatment causes pain to the fish.

Pain behavior
The results of the experiments show that farmed salmon exposed to water from 28 degrees upwards reacted with clear pain behavior.

The pain behaviours observed were, among other things, a high swimming speed, fish colliding with the side of the vessel and head shaking. Eventually, the fish broke the surface, swam in a circle, and in some cases, lateral bending of the body was observed. The pain behaviour persisted until the fish lost equilibrium and lay motionless on the side.

The Institute of Marine Research and the Veterinary Institute suggest that increased injury frequency and mortality from hot water treatment may be due to stress and the panic reactions that the hot water imposes on the fish.

New knowledge must be used
All methods and changes in methods, used against salmon lice shall be documented welfare-wise. Deviations from the current treatment method, for example, related to holding time, should thus also be documented, said the Director.

“We still lack a lot of knowledge about fish welfare, but more and more research is being done. That is why it is important when we get new knowledge that we share it to ensure and improve fish welfare,” Wilmann added.

The Norwegian Food Safety Authority has informed trade organisations and the fish health services about the preliminary results.

“We expect fish farmers, fish health personnel and others who are responsible for salmon lice treatment with hot water to take into account the results in the future. We have the same expectation for the manufacturers of equipment and method,” said Wilmann.

The Norwegian Food Safety Authority will continue to follow up losses where fish have been injured or died.

“If an incident happens during hot water treatment, the use of water above 28 degrees can be an aggravating reason for any reactions,” Wilmann explained.

The Norwegian Food Safety Authority is now preparing guidelines for how inspectors should follow up hot water treatment in particular.

“The responsibility for fish welfare lies with the farmers. They must ensure that the fish’s health and welfare are assessed before any treatment. They have to take into account the new knowledge of pain behaviour during debilitation in water above 28 degrees,” Wilmann concluded.