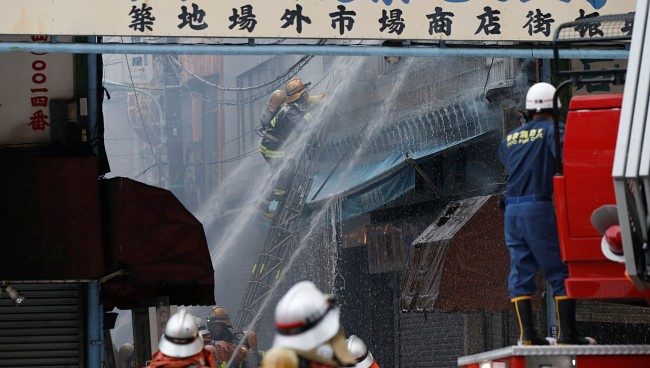 The decommissioning work on the fish market started in the morning and continued far into the evening. PHOTO: TORU HANAI/REUTERS

According to Tokyo’s fire department nobody was injured in the fire because it broke out after the stores closed. The internal market, which sells very exclusive ingredients to Japan’s finest sushi restaurants, also escaped damage in the fire.

“First, it was just smoke, but it got much worse,” Kiyoshi Kimura, the head of the popular sushi restaurant Sushizanmai told TV Asahi.

In June, Tokyo’s mayor announced that the Tsukiji market should be moved to a new area. Many of the sellers have expressed concern about high pollution and high levels of mercury in the ground at the new space.

The market is being moved to make way for the summer Olympics in Tokyo in 2020. The mayor of Tokyo has also said that the present market is too old and must be rebuilt due to high earthquake risk.