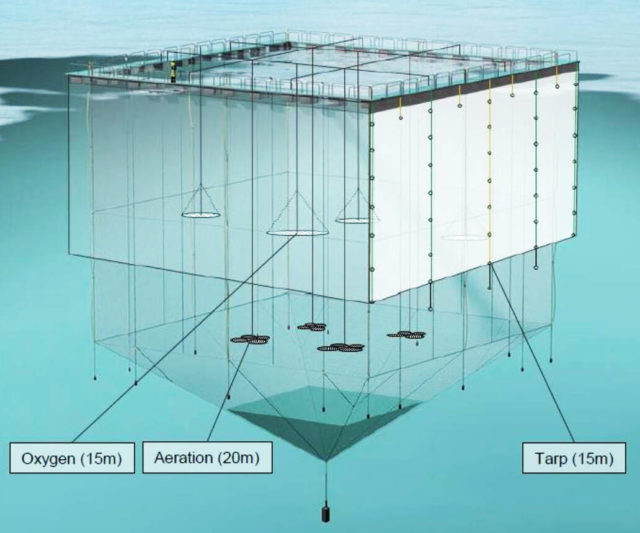 After trialling a new semi-closed system at its salmon farms off of Vancouver Island, Grieg Seafood BC will be expanding the use of this technology to its farms in Esperanza Inlet on the west coast of the island.

Grieg Seafood BC tested the system at its farm off the Sunshine Coast. During this trial, farmers noted better growth, lower mortality, better feed conversion rates (meaning feed is more efficiently converted to growth), and a reduction in the need for sea lice treatments, according to Grieg.

“This has several benefits, including preventing the lateral interaction of wild and farmed salmon populations, providing protection for farmed populations from harmful algae, and allowing our farmers to better control water quality in the system using a unique aeration technology.”

The amount the system reduced sea lice levels during the trials was such that the fish did not require treatment for lice, said Boschman.

During wild salmon migration periods or when there is algae, the system’s barriers can be lowered, forming a barrier between wild salmon and the farmed population, said ​​Dean Trethewey, Grieg seawater production, certifications and regulatory director, in the release.

Reduces transmission
“This prevents lateral interaction, and significantly reduces the transmission of sea lice between the populations,” said Trethewey. When barriers are lowered, the system features technology that works to increase oxygen levels. “The barriers can be fully lifted outside of these periods, allowing the farmed fish to benefit from natural ocean conditions, temperatures, currents, and oxygen levels,” he said.

The company announced on Tuesday that it will install the semi-closed system at all three of its farms in Esperanza Inlet, located off the west coast of Vancouver Island, in time for the out-migration of juvenile wild salmon in early 2023.