The signs in the shop windows say ‘closed until 2022’. As the wind howls, and the rain crashes down over Mallaig on a Tuesday night in November, you might expect the docks to be as quiet as the town’s streets. Instead, they are a hive of activity.

For more than 100 years, Mallaig has been the terminus of the West Highland Line, and the gateway to Skye and the Hebrides. It is also the final destination for millions of farmed Atlantic salmon.

Mallaig is the site of Mowi’s only harvest station in Scotland. Every night the company’s enormous wellboats dock against the concrete harbour walls of the tiny Scottish port and pump in tens of thousands of fish to be stunned and bled before transport to Fort William.

Site manager John Gillies, a former postman from Skye who has been working for Marine Harvest – and now Mowi – for for 24 years, gives us a tour of the facility.

Gillies continues, “People always ask why we do night shift.”

The decision to harvest at night, he explains, was made with the safety of their co-workers in mind.

“The boats used to go and pick up the fish in the dark. We proposed that we would do the harvest at midnight. It gives us a better chance of the fish going up to the factory in Fort William without any delays. And then the sites could load up in daylight so the boat goes out in day light comes in here in the dark with less exposure to bad weather and dangerous conditions.”

Controversy
This week, the work of Scottish harvest stations came under the spotlight when The Guardian ran a story claiming that the UK government has admitted there are no routine checkups on fish welfare at slaughter, after an investigation found no department would take responsibility.

The implication of these stories is that fish are frequently mishandled or mistreated. The reality as witnessed by SalmonBusiness was very different.

Salmon, suffer from serious quality loss if stressed during the harvest process prior to slaughtering. With harvesting as important in determining the final quality of the product as everything that went before. Getting this right is a priority for any company looking to get the best return on all the money invested in its stock.

Trial
As Gillies explains, harvesting is a continuously evolving science that seeks to maximise the quality of the fish. During our visit, we were able to witness an attempt to further this aim, as the stations existing RB7 machines that stun and bleed the fish are measured against another system known as a swim through. Against these was pitted an electric stunner, in which the fish are exposed to an electric current in water while being pumped through a pipe before being manually bled.

If the trial is successful it could point the way to the wide scale adoption of these electrical methods.

The advantages of improved harvesting techniques are clear: Higher flesh quality with reduced gaping and blood spotting in filets; longer pre-rigor time  resulting in reduced wastage when fish are machine processed and a longer shelf life. What’s more, this method could allow for faster processing at the station where, according to Gillies they are already capable of processing 60,000 fish an evening.

With the company’s Blar Mor site in Fort William about to undergo an extensive set of upgrades, this will be key in matching the capacity of the harvest station to the output of the upgraded processing plant.

Progress
While conducting a tour of the site, Gillies picks up a battered and weighty looking wooden club from the shelf in his office. “This was the very first killing stick at Marine Harvest,” he says.

Things have come a long way in just a few short decades.

In 1999, automated stunning systems driven by compressed air were introduced and first used in the industry.

Researchers have shown that mechanised stunning has introduced greater consistency to the harvest process and that percussive force alone causes insensibility and indeed death in the majority of fish.

We watch as the harvest crew gently grasp each fish near the middle of the body, guiding them into the opening of the machine to ensure the fish is upright. The fish activates the trigger system, resulting in the piston striking the fish on the head, rendering it immediately unconscious.

Whilst it may appear that percussive stunning is a straightforward procedure, great care must be taken in the operation, as both operator error and/or equipment failure will severely compromise animal welfare (and affect product quality). Hence the company’s interest in electric stunning. 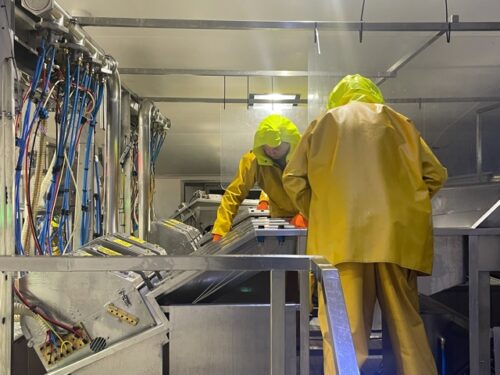 Going electric
Methods for commercially stunning and killing fish by electricity in the UK were also initially developed in the late 1990s. Electrical methods can be divided into two types: stunning only (electronarcosis), where the stun is quickly followed by a method of killing; and stun/kill (electrocution), where fish are rendered permanently insensible by an electrical current, so there is no need to follow up with any other procedure.

There are electrical stunning systems which stun fish whilst they remain in water and others which stun fish out of water using electrodes which make direct contact with the fish (‘dry’ or ‘semi-dry’ systems).

Both methods have pros and cons. Stunning fish in water reduces the stress of exposure to air and light and reduces the likelihood of mechanical damage to the skin. However, ‘dry’ or ‘semi-dry’ stunning systems have a more consistent effect on the fish and can result in less electrical carcase damage.

Results
Gilies explains, “We have an inspector here, there and here.” He says pointing to three stations in the harvest room. “That is to stop any fish that didn’t get properly stunned or bled, manually stun them, and then manually bleed them.”

What would be a good result from the trial, what are the experts looking to see?

“A great result tonight will be reflected in the flesh quality, and we’re checking to see if there’s any damage to the backbone from the electric side of the study.”

“We have already had one trial, two weeks ago. We’re still waiting for the full detail from that. But the quality inspector will be up here tonight. She’ll be doing rigour tests, and that’ll be done for the next 72 hours.”

“For our part though, we just have to fill three bins up, record them and code the bins.”

With up to an estimated 52 million salmon farmed and slaughtered in the UK each year, even these incremental changes can make huge differences.