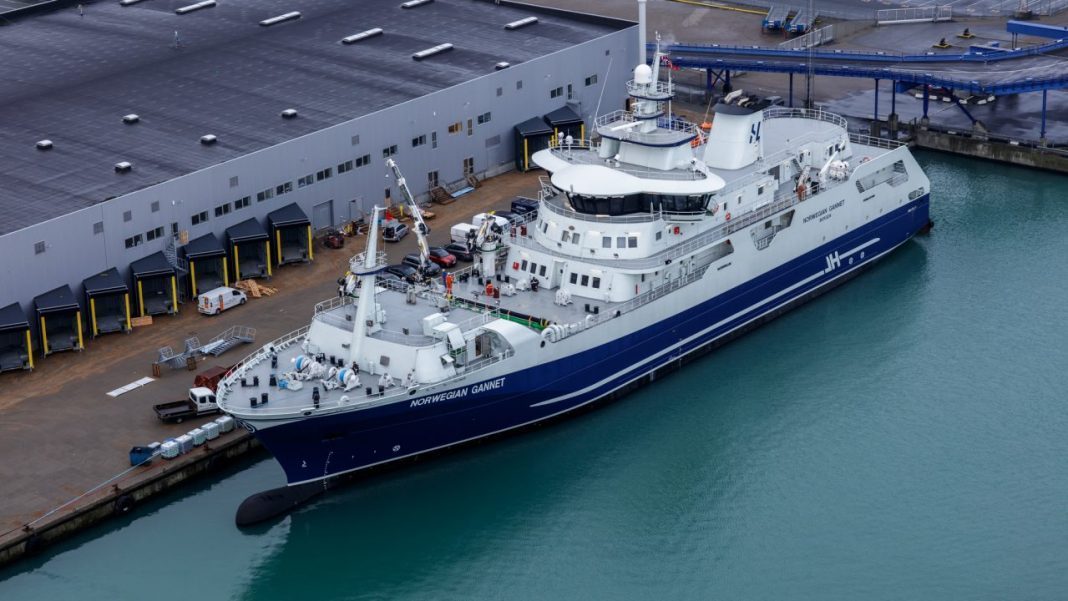 The controversial but revolutionary harvest vessel,”Norwegian Gannet”, has completed its first trial at Hirtshals, Denmark.

The vessel can transport and process fish straight from the cages without the need to go on land, prompting fears by some in the processing industry. However the innovation is celebrated by others.

Nevertheless, “Norwegian Gannet” is a vessel that can change salmon farming.

Now the boat is one step closer to operation, with test completed off the Danish seaport, Hirtshals. The boat came directly from the yard in Spain through the English Channel and to Hirtshals.

A new salmon terminal has been built in the Danish port city, where the finished harvested fish will be received, placed and transported on trucks.

To get the fish out of the boat and onto land, it must pass through pipes. The connection of these pipes was part of the test carried out at the pier in Hirtshals on Tuesday.

Successful tests
The test went as expected, said Carl-Erik Arnesen, CEO of the Hav Line Group.

“We have yet another few weeks left of tests before we’ll begin to operate,” said Arnesen.

There was, of course, no fish aboard the boat, as the on board slaughterhouse is not yet finished.

“It’s the first one the world, so it’s to be expected that it will take some time to test and correct,” said Arnesen.

He expected the boat to be operational by the end of the year.

Dramatically less road haulage
The ship was built at Balenciaga in Spain earlier this year and baptized in May.

The boat is 94 meters long and can take up 1,000 tonnes of fish at a time. It will take 140 tours a year between fish farms along the west coast of Norway and Hirtshals.

The company has previously said that the boat can reduce road haulage with 7000 lorries a year. Hav Line said earlier this year that they needed 100 new employees for the harvest vessel.