“In a listed company, it is power that rules,” such is life, concluded the outgoing chairman of the board and newspaper billionaire Odd Reidar Øie to NT24 just after being thrown out on Friday by the fish farming company NTS.

The big loser, Helge Gåsø, did not bother to attend the general meeting. He  knew he had lost even before the meeting began. In a short time, Gåsø has lost control of NTS, Norway Royal Salmon (NRS) and Frøy. He had built up the latter, a shipping company, from scratch.

“It is a pity that it will be like that, but I of course understand that the unrest among the owners will spread down the organization. That said, there is no reason to fear for the employees,” said board member Roald Dolmen.

Looking ahead
Dolmen joins the newly elected board, which is led by another of the NTS rebels, Nils Williksen.

“Now we have to roll up our sleeves and start the job,” said the newly elected chairman of the board Nils Williksen to NT24.

Williksen elaborated to Norwegian business newspaper Dagens Næringsliv: “It is good to have clarity. Everyone benefits from it, both owners and employees. Now we can start looking ahead.”

“Now NTS continues as an independent company. It’s business as usual,” he added.

The new board started work immediately.

Head rolling
But it was definitely not business as usual. There was washing up to do, yes, even head rolling. 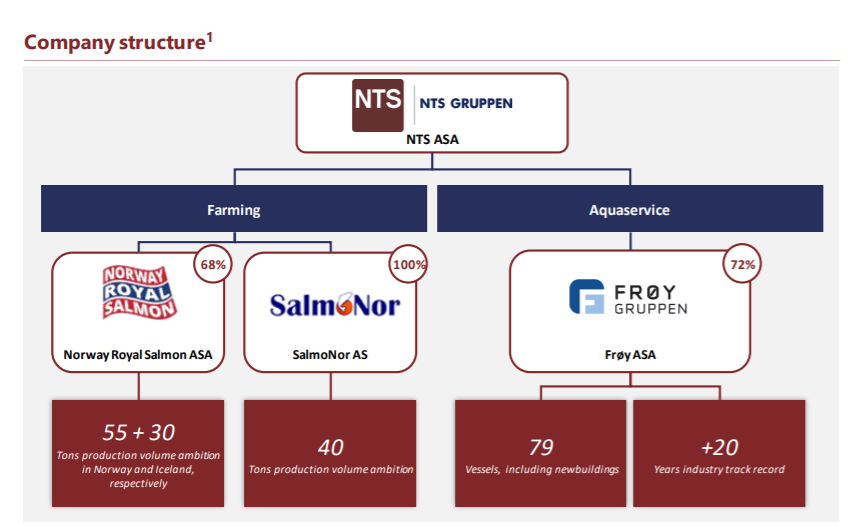 The first thing the recent board did was to send a letter to the two subsidiaries, NRS and Frøy, convening an extraordinary general meeting. On the agenda: Board elections. Opponents of the victorious regime are on their way out. Here it is action, not emotion, that counts.

Then, late Saturday night, came the news that NTS’ CEO Harry Bøe, who allegedly has too close ties to Helge Gåsø, had been fired – with immediate effect. The new board had spoken.

Cleaning up
Monday morning, a new general meeting of NTS was convened, the third in a row this year. On the agenda are the election of the board and nomination committee, as well as a review of operations and debt situation for the group. Behind the summons is ex-chairman Odd Reidar Øie.

NTS is heavily loaded. The total net interest-bearing debt, for the entire NTS Group, was NOK 12.6 billion (€126 million) at the end of the third quarter.

This must be cleared. The ground must be prepared for the company’s new majority owner. There is a particular tension around the question of whether the shipping company Frøy will be part of the further structure in NTS – or whether the company will be sold out to slim down the group’s debt.

The NTS rebels effectively clipped the wings of the company’s largest shareholder, Helge Gåsø. Gåsø is now being replaced by Gustav Witzøe, as the company’s main owner.

But Witzøe will not fall into the trap that Gåsø did: He has already secured control of over 50 per cent of the shares. So head-rolling and strategy choices will not happen without the blessing of the mighty SalMar boss. Because it is Gustav Witzøe who is the NTS coup’s undisputed winner.