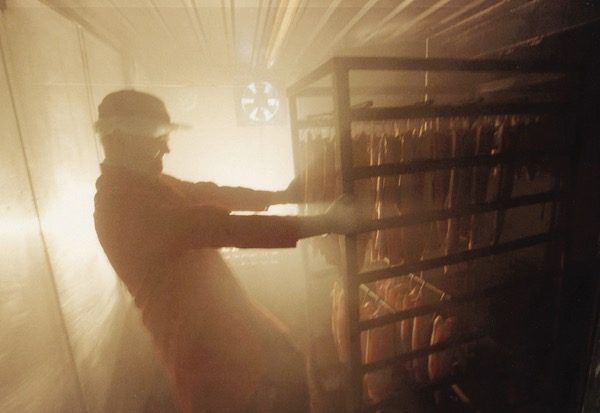 Robert and Rosie Campbell-Preston started Lorne Fisheries way back in 1974. Today it’s one of the most renowned smokehouses in Scotland.

Today in Argyll surrounded by stunning lochs and mountains, Inverawe Smokehouses, holders of the Royal Warrant, is one of the most renowned smokehouses in Scotland.

The business is now run by son Patrick Campbell-Preston who is described as the “boy who grew up in the smoke.” SalmonBusiness talked to its passionate sales director Bertie Thewes about why being “unusual” can pay off.

Inverawe is one of the biggest salmon mail order food business in the world but it all began with just one smokebox in the 1970s. Can you tell us about the very early days?

“Robert and Rosie Campbell-Preston started playing around with salmon smoking, going to country fairs and markets. They then gradually staring selling it to family and friends. The mail order side of it took off back in the day when it was just phone and a fax – if you were lucky to have one. Now we have 80,000 customers on mail order mainly in the UK and a small part in mainland Europe. The company sells all around the world including the Middle East and the Far East.”

Time is the answer
A lot of work goes into the smoking process at Inverawe Smokehouses. While the rest of the world, it seems, has sped up, they prefer the gradual pace of traditional slow smoking.

“99% of commercial smokers put salmon in a large container with oak or beech chips for 8 to 9 hours and it’s pretty much done. We’re different.
We lay our fish in the kilns and smoke them over oak logs, locally sourced from sustainable wind blown trees.”. We smoke them from 36 to 72 hours. They are then allowed to rest for a further 24 hours in the chill to fully mature and relax before being sliced, packed and sent out.”

The lengths vary because the old style brick smokeboxes (the fires are kept going 24 hours a day) are dependant on the wind, the outside air temperature, the precipitation. “No chamber smokes the same, it always varies,” added Bertie. “You can never rush an order.”

They source salmon and trout from farms that are located in areas with strong tidal flows, in either the coastal waters off Argyll or the Shetland Isles. Bertie didn’t precise where exactly but told SalmonBusiness that he sourced them only from “environmentally sustainable farms.”

Royal fans
Their artisan careful approach to the smoking process produce caught the eye of not just one, but two very important customers: Waitrose and the Queen.

“We got the Royal Warrant in 2000 which was a great honour – which means we supply salmon and trout to the royal household. We haven’t had much feedback off the royals but they keep buying it which is a good sign – our fish is often used at the annual Garden Party.”

Bertie said that Waitrose were astonished by their traditional craftsmanship.
“We are very hands on, unusual even. The method is laborious, it’s about taking your time. The lights come on when you taste it. It’s a really special thing. As our salmon cures at the same time as it smokes, it has more of a bite to it in terms of the consistency of the meat. It isn’t too slimy or slippy as can be so many alternatives smoked in the faster manner. Though our “king of the smoke” is our trout. It has very buttery flavour. It’s won over a lot of people who wouldn’t have thought they would.”

We get the feeling that it’s quite a fun place to work. Is it?

“Oh it is. It’s a family run operation, I’ve known the Cambell-Prestons since I was a child. We work hard but we also have fun, but if we need to be at the smoker at 4am, we are.”

Finally, the site has a very special domain – www.smokedsalmon.co.uk – how did you go about getting it. It must have cost a fortune?!

“We were lucky on that one. Patrick’s mother bought it way back before anyone was really thinking about it. Like with the mail order, she was very ahead of her time!”