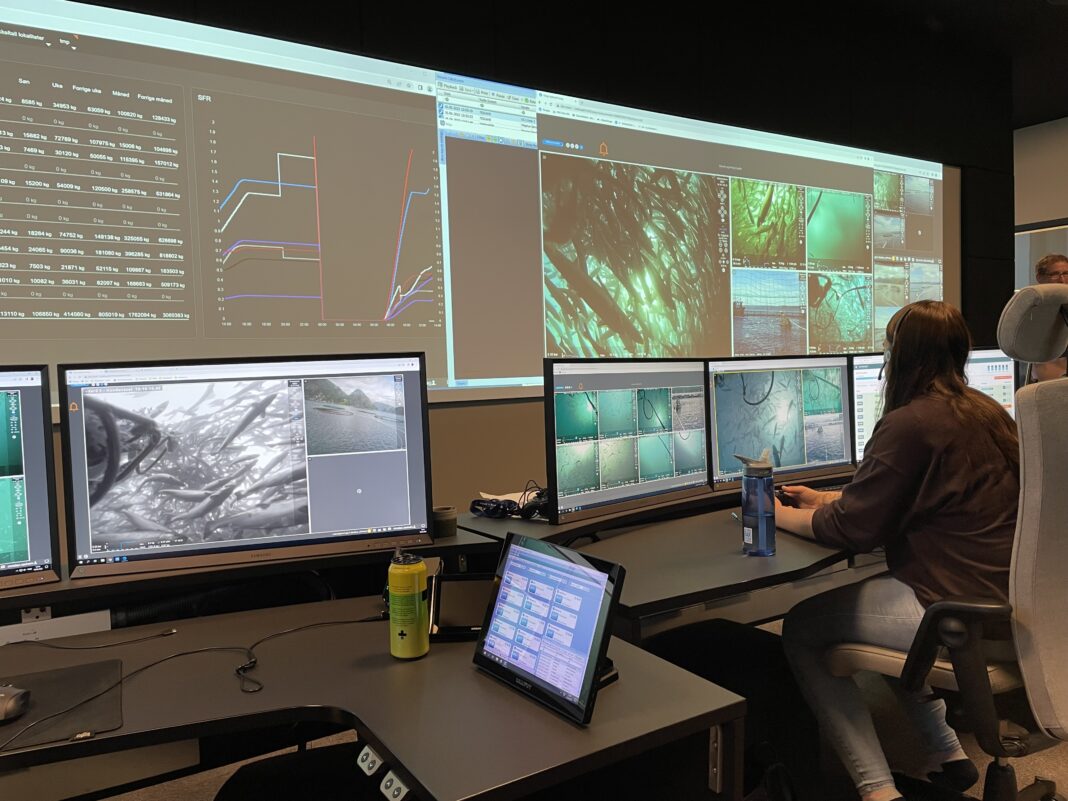 The regional headquarters are located in the middle of ‘Grieg-country’. At the quay at Finnoy, an island just north of Stavanger, the harvesting boat “Volt Harvest II” is moored. It will soon enter into a contract to deliver fish to the slaughterhouse on Sjernaroy, just a tiny boat ride away. The sister vessel “Volt Harvest I” is already working at full steam.

In the basement of the newly built commercial building, just over hundred meters from the ferry berth, is the feed center, Grieg’s beating, fully digitized, heart.

Behavior
In front of two rows of chairs, one on each side of the room, a number of different computer screens are being operated. Trained eyes follow the fish’s behavior and its movements in the water. Up and down in the cages. Salinity, average weights, water flow, depth and temperature.

Thirteen locations. From Suldal in the north to Stavanger in the south.

Concentrated
“We feed a biomass of 15,000 tonnes. We can theoretically also feed Finnmark”, says Stromskag. “We measure pellets per fish per minute, and aim for two meals every day.”

There are boxes of Red Bull and Monster on the table. Deeply concentrated and focused workers maneuver the underwater cameras up and down in the cages, using the Playstation controllers.

On the screen in front of them it says 1762285 kilograms. This is the feed consumption so far this month. The number increases by about five kilos per second. We are writing mid-June, and are approaching high season for feeding. In the summer heat, the salmon has a voracious appetite.

Hypothetical
Grieg Seafood is well equipped to handle just that.

“We have a huge computer capacity. Each operator has three servers”, Trond Kathenes, the company’s director of digitization, adds.

“Purely hypothetically, we could operate the whole of Grieg from here,” Kathenes adds boldly, knowing that it means two regions in Canada, namely British Columbia and Labrador/Newfoundland, as well as Rogaland and Finnmark in Norway.