The salmon price is speeding away – towards the highest level of all time.

“When one reaches this level, there is such a screaming shortage of demand here. I spoke to some Russians earlier today who said that there was hardly any fish to be found from the Faroe Islands and there is little from Scotland as well. Chile and Norway – all have shortages. It is a perfect storm,” he continued.

“It is not a question of price. The first question when people call is: Can you deliver? And then they ask for a price, but they know we agree.”

Fines
He received support from another large salmon farmer:

“Food is becoming more expensive, so consumers do not notice it. Do you know what a cooked ham or salami costs?” he asked rhetorically, adding that all food prices are rising.

Shortage
A German importer SalmonBusiness spoke with bought salmon for EUR 8.50 euros last week. Now he has to pay EUR 9 per kilo to have the fish delivered and customs cleared to Germany. He prefers to buy Scottish salmon, but says that this is hardly possible to get now.

“It just tells that there are very little fish available now. I have bought at higher prices on individual sizes, but not on all sizes, over three kilos,” said a trader.

All seven industrial sources SalmonBusiness has spoken to after lunch on Friday point to a sharp rise. About 15 percent up in a week.

“We only have contracts, only a few small things in the spot market, but I hear those prices, yes,” said a third fish farmer affirmative. 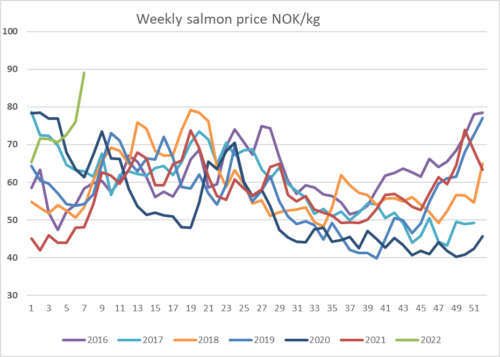 Inflation
The record high prices come at a time when the salmon price is preparing for a boost towards Easter. The highest prices of the year are not normally achieved in February.

“It is well over 80 kroner (EUR 8) for anything over 3+. This is the first time it has happened, at least as long as I have been in the business. Completely crazy,” said an exporter to SalmonBusiness.

Inflation has become a very important word in 2022.

“All foods have risen in price. Everything costs more: Electricity, energy, logistics, transport, raw materials, oil, grain, everything has risen insanely in price. Do we get a higher price for salmon this year? We can not be surprised. Those who are struggling now are those of the processors who have not fixed contracts, and there are many of them. I fear that many will break their backs, because they have not secured their prices. For many, this is dramatic,” he noted.

“And the credit insurance limits, remember that a truck load will soon cost two million kroner. We have to reduce volume, because we do not have enough insurance for our customers.”

He has no doubt that prices will remain high for some time.

“Remember that the price in 2016 was EUR 6.60 in Europe. That’s six years ago. It’s not a anything in cold stores either. So we will probably have to settle for significantly higher prices than we had expected. We are talking about 8.60-9.00 euros in the market next week. That’s what we hear. I have never bought at such high prices in my life. Never,” said the exporter.

“We must be involved. We have no alternative. This is what we are doing,” he said.