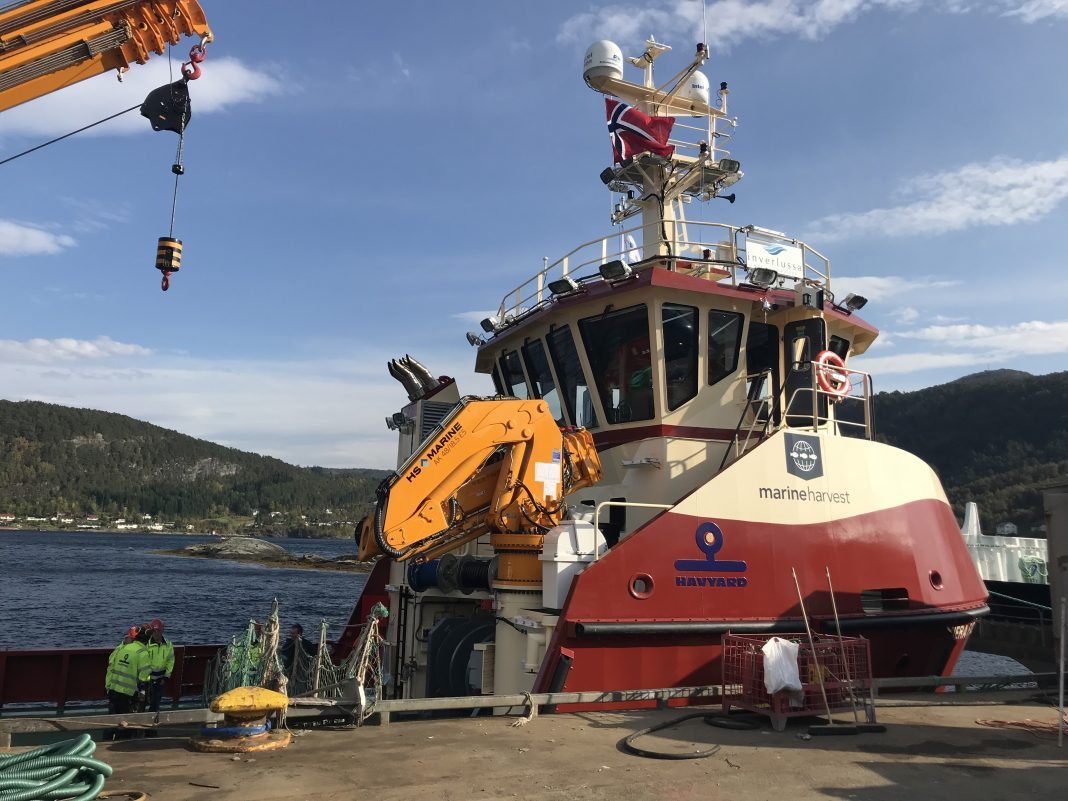 Although the price was somewhat higher, the standard and delivery time made  Scottish shipping company Inverlussa choose a Norwegian supplier.

Its freshly painted steel gleams in the sun that’s pushing through thin cloud over the Sognefjord. On the mast, Inverlussa Marine Services’ pennant is already in place. The Scottish shipping company took over its new-build ‘Kiera Fiona’ at Havyard Leirvik on Thursday morning.

“It is good. We are satisfied. We believe it will set a new standard”, Inverlussa Director Douglas Wilson told Salmon Business.

As soon as the trip over the North Sea has been completed, the workboat will enter a contract with Marine Harvest Scotland.

“It is designed specifically for fish farming. It will just do a better job really. The weather can be quite bad in Scotland. With this boat, we’ll lose fewer working days. Utilization is crucial for Marine Harvest, especially at its most exposed sites.”

“It will cover the entire west coast. Sometimes it will go for 20 hours between Marine Harvest’s sites. Being unable to use the boat in bad weather will cost the company, cost Marine Harvest, a good deal of money.”

Normally Inverlussa builds its boats back home in Scotland. However, they have built the last two at Havyard.

“There are some shipyards there, but we decided to build it in Norway. By building here we can get help to get into the market. We chose to build here because of the standard and delivery time,” Ben Wilson, CEO of Inverlussa, told Salmon Business.

“The price is somewhat higher here, but we get quality. And the delivery time is also worth a little extra. They are not as fast in Scotland. I guess that it has something to do with the size of the yard.”

The boat was completed in a record five months.

“We think it is extraordinarily fast for a vessel of that size – with all systems on board,” Lars Conradi Andersen, Sales Director at Havyard, said of 25.5 meters long ‘Kiera Fiona’.

“We have invested in multi-purpose boats,” Ben Wilson said, willingly showing off the facilities on deck. “We have not got a chain stopper back in Scotland. This makes it safer for the crew when working with heavy moorings.”

Inverlussa is not an old shipping company. It was established in 2006, owns 11 boats, and is owned by the Wilson family which has its background in fishing and shellfish farming.