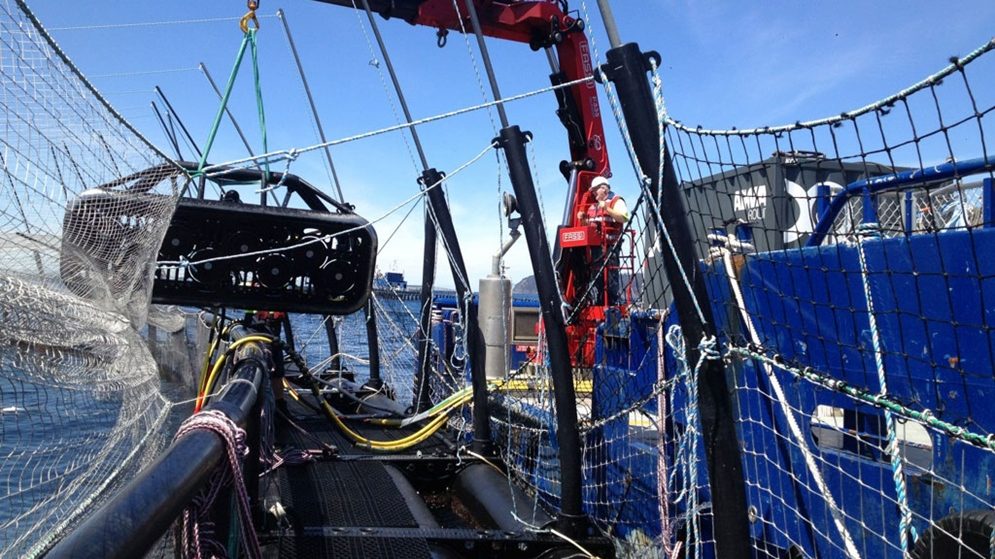 Australian fish farming and processing company Huon Aquaculture is investing heavily in one of the world’s most exposed areas. New feed barges and ROV net cleaners will be important tools to reach the company’s ambitions.

“Our farm in Storm Bay, in the southern part of Tasmania, is what we believe to be the world’s most exposed marine farm site. Farming here has presented challenges both due to being a rough exposed site, and having a large aggressive seal population. This combined with Australia being geographically far from a lot of equipment providers, has driven us to innovate at home and search world-wide for the emerging technologies,” said James Bender, Business Development Executive at Huon Aquaculture.

Huon Aquaculture operates one of the world’s most exposed farm sites, Storm Bay, in the southern part of Tasmania.

“We are constantly searching for new technology and travel quite often to Norway to visit and learn from our colleagues in the industry,” said James.

Since the company was founded more than 30 years ago, Huon Aquaculture has become a major player in its field. Today, the company produces more than 24,000 tons of salmon and ocean trout each year, and has recently begun trialing farming yellowtail kingfish, with the support of the local government, some 6kms off the coast of New South Wales. They have also exceeded a revenue of AUD 250M.

More than 80 per cent of the fish Huon Aquaculture grows is sold to the domestic market and the rest is exported to countries in Asia. James sees great possibilities for further growth.

The company has two FNC8s (Flying Net Cleaner) today and have ordered an additional six units. Four of the new FNC8 net cleaners will be inbuilt into purpose built vessels. The ROV technology helps the company streamline its operations (image: Huon Aquaculture).

“In the coming years, we aim to increase our volume at around 10 per cent annually to meet domestic market growth. We are making considerable investments in technology that is adapted to our conditions and will help us realize our ambitions. AKVA group is one of our key external suppliers that we use and we have a good collaboration. They are delivering four AC 600 feed barges to us during the course of the next four years. We currently have a Sperre 10k ROV, two FNC8s ROV net cleaners with another two due for delivery in January and four more units delivered mid next year which will be inbuilt into purpose built vessels,” said James, adding:

“We were looking to renew some of our equipment and found AKVA group’s technology very promising. The feed barges are customized to fit our needs to work as remote unmanned barges in extreme offshore conditions and the ROV technology will help us streamline our operations. We’re looking forward to getting all deliveries in place.”