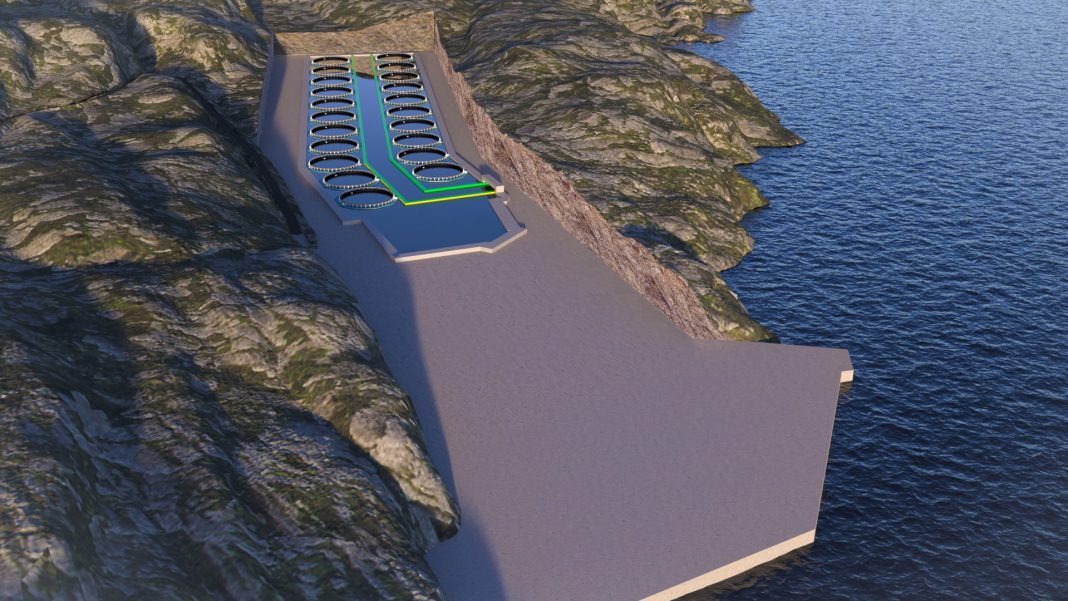 He has three land-based facilities under planning, for a total of 90,000 tonnes of salmon. However, Geir Nordahl-Pedersen has not received a breakthrough for his concept with the Norwegian authorities.

On the island of Losna, Western Norway, Nordahl-Pedersen has bought a large property privately. Here he will establish floating closed cages inside an over 400m-long mountain pool. Losna Seafood was established in 2016 and was granted a licence in the spring of 2020.

“And it has gone its round, but is currently out of action. It is under consideration by the Minister of Fisheries as we speak,” Nordahl-Pedersen told SalmonBusiness.

“When we made plans for land-based fish farms, these were based on fish health, water quality, lice, escapes, feed residues, economy, cleaner fish, pollutants, starvation and handling. It is clear when we talk about sustainability, economy and electricity consumption, we can operate a flowthrough facility for ten years compared to the electricity consumption the others have in one year on the same amount of fish,” he said.

Pool
“What we do is we go ashore and create a pool that is below sea level. And the reason we do it is that we then get a pump cost that is minimal,” he continued.

“We pick up water from 75m, clean it in a filter, and then it is brought into the pool. The only pumping we have is from the pool and up into the cages. And there we use an upper altitude. Then it flows back into the sea in the slope we have established there. The whole faciltiy, absolutely everything, is in PE plastic and canvas. It means a clean pool for all future. All materials we use are recyclable,” he stressed.

They will also collect sludge from the cages and process this locally.

“It is not tidal driven,” said Trond Haugland, Nordahl-Pedersen’s business partner and general manager of Averøy Seafood and Øygarden Seafood.

“The whole principle is water in, water out. We have a very large waterway in,” said Nordahl-Pedersen. “We received a licence of 28,600 tonnes from Vestland county municipality, and we stand by the fact that it still applies. So that’s kind of our starting point,” he said.

Planning
They have come a long way in planning the facility at Losna, which will form a template for the sequels on Averøy and Øygarden. They have already spoken to supplier companies such as Uponor and Framo about pipes and pumps respectively.

“Averøy and Øygarden will be identical, but it has been put on hold,” said Haugland.

As intended for the facility, it could have been in closed cages in the sea.

“We have a patent that makes it even more interesting. We have modelled the current conditions throughout the Sognefjord, it took three days to run in a huge computer in Holland. We looked at the distribution of main currents and distribution of nitrogen and so on,” said Nordahl-Pedersen.

Patent
“Then we got a patent. There are three water reservoirs: sea, pool and a floating facility. And we’ve got that patent now in 40 countries. Later last week, I got the papers on the patent in the States. We have the whole EU and, of course, Norway,” he said.

“And then we have had a discussion what is on land,” he says and goes to the core of what the Directorate of Fisheries and The Ministry of Fishery focuses on.

He pointed out that other land-based fish farms, such as Bulandet Miljøfisk and Andfjord Salmon, have similar concepts.

“It’s not equal treatment. If we were to put the facility in tanks on land, we would have to have 30 kilometres of PE pipes in a pipe system with pumps. It would cost our project NOK 700 million (EUR 70 million) in PE tubes alone, before you got to the digging. It costs an enormous amount to put it down. You’re going to have people weld it and pull it out. You’re going to have a water logistics. And water log stings are expensive. But a tunnel or a pipe – it’s not expensive,” he said.

“I have learned that building something that is cheap, and at the same time just as good or better than the competition, then you win. It must be operated too. Such a large facility is cheaper than several small ones,” he added.

Tides
He disagrees with claims that the facilty is exploiting the tide.

“It is hydrostatic pressure we use, not tides,” he said, addressing the Directorate of Fisheries. “We take advantage of the pressure from the height from which we draw the water, not tides”.

“The cages we make from canvas, and it’s cheap. We produce electricity as cheaply as they do with a lice net. If we’re going to compete, we’re going to have to do it on the best possible terms. It can’t be the case that we’re not allowed to do it because it’s too good – and then we can do it abroad. That’s just too stupid.

“Drilling a hole is not expensive. It is logistics of water – in and out,” said Nordahl-Pedersen. “We move 13,000 m3 per minute. But we do it cheaply. Minimum lifting height,” he said.

But now you have been fighting with the government and the directorate for several years. You could just skip it and start in Scotland or Iceland or Sweden or elsewhere?

“To put it this way, if I would have known everything we know now, of course, we would have done that,” he said.

Are there any countries that are more interesting than others?

“Of course we have had some discussions,” he said, mulling the question.

“But I’m a little patriotic. I like to do things here. On the supplier side, I have always received the best help from those who are close, not those who are far away. We only have local suppliers on our equipment etc. We want to be in Norway. But it’s clear that if we’re not allowed to be in Norway, and we’ve spent so much money and resources, then it’ll pop up somewhere else,” he said.

Legal
In comparison, listed land-based fish farmer Andfjord Salmon will produce 90,000 tonnes of salmon in mountain basins near the sea, and will make investments of EUR 800-900 million.

“We have three facilities for 90,000 tonnes. And we’re going to invest three billion kroner (EUR 300 million .ed). They’ve all buried a facility, below sea level, they’re all getting the water in. And those facilities are ok, but ours isn’t, added Nordahl-Pedersen.

Is there an alternative to try this case legally?

“To put it this way; we have been stopped by the Ministry of Fisheries now. And the minister will make a new evaluation. We think it’s wrong to classify it as a sea-based system. And then they have to say where they find the rules that show it’s a sea site. And they haven’t been able to do that. Then we expect that there will not be an escalation in the conflict and that we are allowed to keep a legally assigned licence from Vestland county municipality, as they have justified why they have given it. We expect to keep it.”

“But if not, we have both in writing and in other things given feedback to the ministry how such a case is handled on our part,” he said diplomatically.

The development with approval that was withdrawn is not entirely unlike the so-called “Norwegian Gannet” case, in which the state ultimately chose to grant ten years of dispensation after a lost trial last summer.

“We have not received the proceedings in the ministry we are entitled to. Now the Minister of Fisheries is going to process the matter again. I feel we have a very good dialogue now, and we will continue to have that dialogue,” said Nordahl-Pedersen.

“You can’t say that the Netherlands or Schipol, which is six metres below water, is the sea,” he concluded.