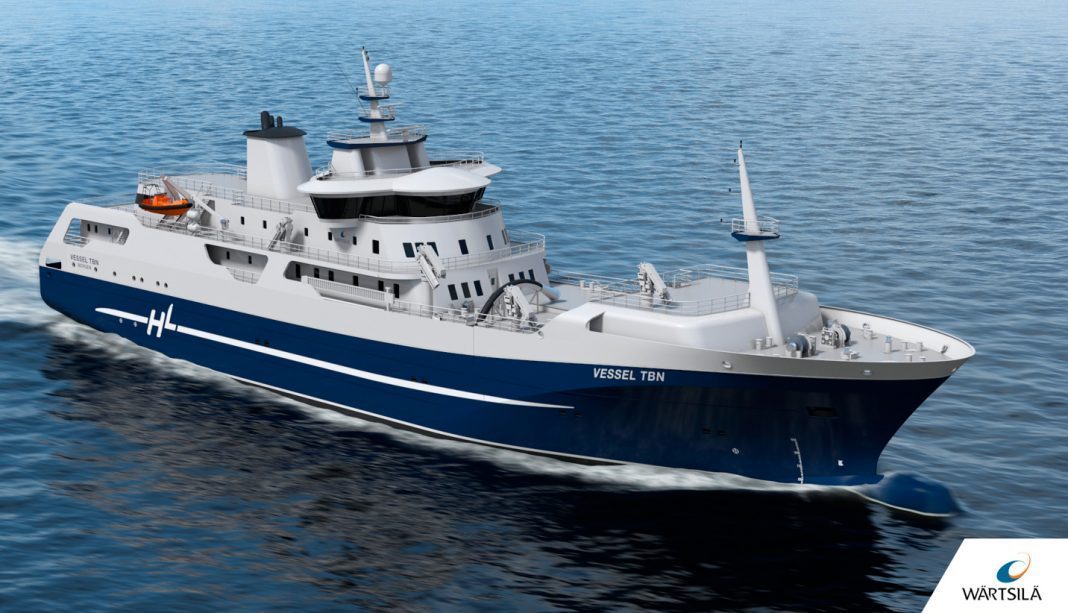 New harvesting boat will be launched next summer. Illustration: Wärtsilä

Norwegians to be also in charge of salmon slaughter operation on board while vessel is at sea.

Salmon exporter Sekkingstad and Haugland group are currently building a boat that has on-board slaughtering facilities. The idea behind the boat project is to collect live farmed salmon from Norwegian marine cages, slaughter and transport these directly to Denmark for processing and onward distribution.

If the Western Norwegian duo succeed with their plans, their business idea could be something of a game changer in salmon logistics.

Stirred up debate
At the same time the construction plans have mobilised widespread discussion.

Jan-Egil Pedersen, president and media contact person for the Norwegian Food and Allied Workers Union (NNN) pulled no punches in his description of the construction plans.

“We can’t exactly applaud then for these plans [of a harvesting boat]. They don’t place any emphasis on generating Norwegian jobs and Norwegian wealth creation. They are not building value for Norwegian society as a whole,” Pedersen said, adding that Sekkingstad currently employs Polish manpower at its slaughter plant at Skaganeset on Sotra.

Instrument
Hav Line Gruppen, which is the “instrument” used by Sekkingstad and the Haugland group to build and operate the boat, has so far not chosen to comment on whether they will have Norwegian or foreign crew on board the boat.

The shareholders, represented by Chairman Jon Hindar, chose to change their PR strategy and spell out what the plans are:

“With reference to today’s report in iLaks concerning Hav Line, I see that “no comment” in certain instances can bring about unnecessary speculation,” Hindar wrote in an e-mail to iLaks/SalmonBusiness.

Norwegian crew
“For your information, Hav Line plans to employ a Norwegian crew for slaughtering/transporting the vessel. I hope this clarifies the matter,” he added.

The vessel, which is being built by the Finnish shipyard group Wärtsilä, will be ready for service during the third quarter of 2018.