The Lerøy group organised a capital market day on Thursday. The event started at Hitra, Norway, where the company showcased its new processing plant on Jøsnøya, as well as the Belsvik smolt plant and the Storskogøya sea location to investors, investment banks and the media.

The Bergen-based company has experienced tremendous growth, organically and through acquisitions, over several decades. In 1990, the then-export company had a turnover of half a billion kroner (€50 million) . A goal of NOK 50 billion (€5 billion) in turnover by 2030 has now been launched. 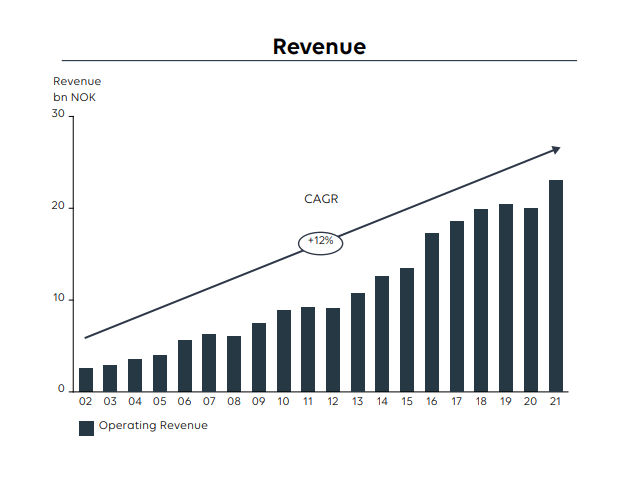 Growing ambition
That was not the only goal launched on Thursday:

Lerøy is aiming to earn the most per kg in the sector, based on farming and processing, by 2025. This calculation includes a result of NOK 1.25 billion (€125 million) in operating profit from processing. Furthermore, the company will harvest 205,000 tonnes of salmon and trout in Norway in the same year. In addition, it is seeking to reduce climate emissions by 46 per cent by 2030, as well as earn NOK 500 million (€50 million) in the capture phase by 2025.

The company is also open to farming other species, with investments in mussels and kelp, which have been engaged in for a few years. Ambitions are now being raised to a production goal of 100,000 tonnes of kelp by 2030.

Larger smolt
The dynamo for earnings is the company’s 119.8 licenses spread across 100 farms. These account for a harvest volume of 186,600 tonnes of salmon and trout in Norway this year. The increase in production that is communicated will be largely based on the farming of larger smolt, from large RAS facilities, in order to make better use of the food fish concessions.

By 2025, Lerøy seeks to cut production costs in the farming division by NOK 4.60 (€0.5) per kilo, which will lift the business to the peak of profitability in Norway.

Not keen
Lerøy board has realized that traditional farming in open cages has limited growth potential, and is consequently keeping a close eye on new forms of operation, not least offshore and land-based farming.

“We see offshore farming as interesting with exciting volume potential, but the technology is immature and the regulations unclear,” says the presentation material. It is also expensive: “Relatively low financial attractiveness compared to coastal farming”.

The assessments are not different for farming on land: